The CFO of Freshworks had two IPOs under his belt even before he joined the IT services company which debuted on the Nasdaq in 2021, and he believes he's the custodian of the company's raison d'être 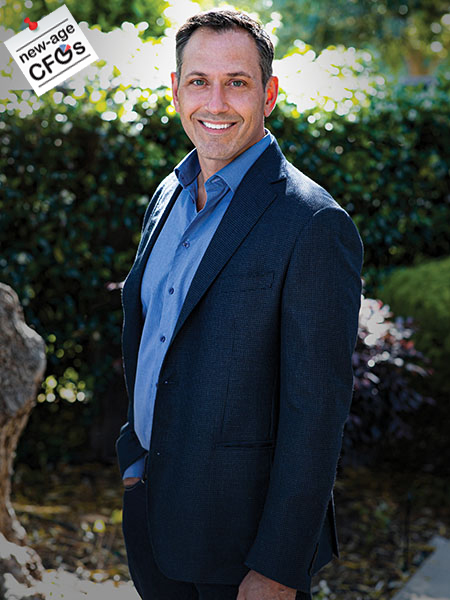 CFOs have visibility into every other function in the company, so I always think to myself, move away from the numbers and see what’s driving the results: Tyler Sloat, CFO, Freshworks

Tyler Sloat recalls being business-oriented as far back as fifth grade, growing up in Hawaii, when he struck up a deal to sell some fancy marbles that his brother’s friend would bring back from trips to Mexico, a couple of times a year.

But what really put him on a career track that would eventually see him become a CFO was a job, almost fresh out of college, at a firm called Coopers & Lybrand—which later merged with Price Waterhouse to give birth to PwC—in what was called their computer assurance services group, which had to do with internal controls audit.

A year or so later, he transferred to the company’s San Jose office where he’d be part of an audit team and “I’d never had an accounting class,” he recalls. “I remember sitting in my car before I walked into the office, reading a ‘fundamentals of accounting’ book, because I did not know what a debit and credit was.”

But he did well enough to convince his employer to send him to their own Coopers Academy, where over an eight to 10-week period of intensive learning—recognised by the University of Southern California—he earned enough academic credits to qualify to take the test and eventually get a Certified Professional Accountant’s license.

In the long run, accountancy per se was less important to Sloat’s career, other than the need to really understand it, than what he could do in terms of helping an organisation grow and manage its business with his knowledge. That journey included two IPOs even before landing at Freshworks—the first one at POET Software, where he was the controller when the company went public, and the second at Zuora, a subscription management software provider, where he was CFO.

Sloat, also a Stanford MBA, joined Zuora when it was still a small startup and spent a decade there, before joining Freshworks as CFO in May 2020. Zuora listed in April 2018, jumping over 40 percent on debut. 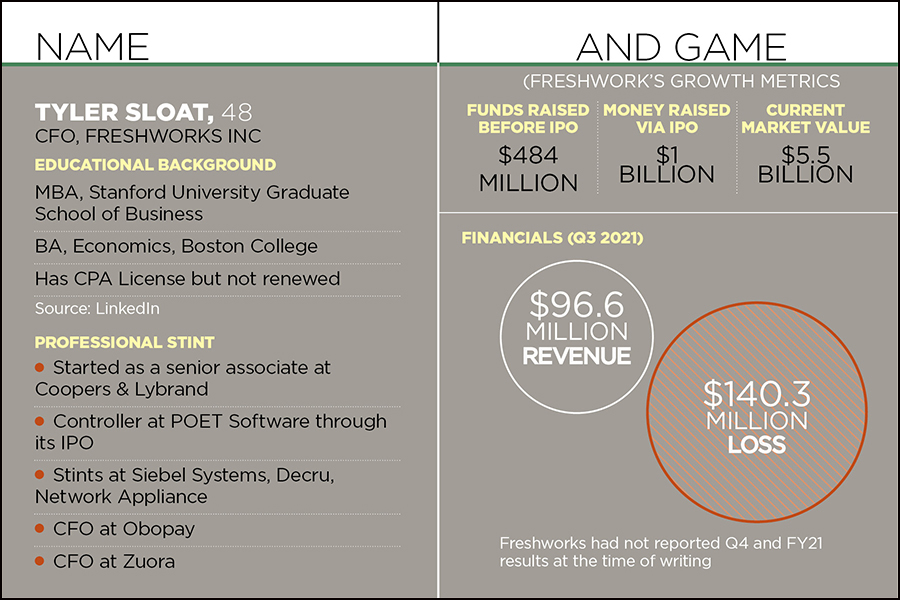 “Tyler brings a strong  performance record, financial acumen, and strategic insight which is requisite to running a disciplined business model that also accelerates our ability to achieve a billion dollars in revenue in the coming years,” Girish Mathrubootham, founder and CEO of Freshworks, had said in the press release announcing Sloat’s appointment.

Freshworks was a $200 million revenue company at the time. By the time it listed on the Nasdaq in September 2021, also rising over 40 percent on debut, it had crossed $300 million in sales.

With almost two years at Freshworks now, “the experience has been incredible,” Sloat says. Broadly, there were two reasons he joined Freshworks as the next phase of his career. In no particular order, one was that he recognised and identified with the culture Mathrubootham was trying to institutionalise in the company of “no antagonism and yet with a lot of accountability,” Sloat had summarised in an earlier interview with Forbes India in September 2021.

The second was that his CFO’s eye could see that Freshworks had successfully built products that were truly relevant to enterprise customers, small and big, but were also built with the end user in mind, meaning they were easy to use, offered great user experience, and were amenable to onboarding customers quickly, “which leads to high ROI (return on investments) for our customers.”

“It is so hard to do, but if you can do that, you can really go a long way as a company, and that is the reason I joined Freshworks,” he says.

He also joined with the understanding that he would be given the writ to transform Freshworks from a nimble startup to a mature, disciplined engine that was ready to be compliant with all the rules of the land, including paying attention to the minutiae involved.

Here is a simple example. In his very first week at Freshworks, there was a meeting in which three different groups made presentations with the same definition for a particular set of data, but each with a different set of numbers for that same definition. Another example of how Freshworks had to be very clear about its data was how does one define a customer. If a multinational customer has multiple dissimilar subsidiaries, on different continents on the planet, are those different customers or the same customer?

Sloat got Freshworks to completely overhaul its IT and management information systems across every important process in the company and also systems that cut across the processes, like data and security.

“We have really been focusing on that in the last two years, and that is what my journey has been, outside of thinking about how do we educate an investor base on what Freshworks is, the reason for our existence and what we do.”

This also has to go beyond investors and existing customers to take the brand to a much broader base of potential customers, vendors and so on. “That is an area where I still think we have a lot of work to do, but I consider that an upside.”

Therefore a lot of Sloat’s work over the last two years has been about getting Freshworks to operate like a public company. “Now that we are public, it’s about getting us ready to be that billion-dollar organisation.”