Russia says it will quit International Space Station after 2024

"The decision to leave the station after 2024 has been made," said Yuri Borisov, who was appointed this month to run Roscosmos, a state-controlled corporation in charge of the country's space program

By Kenneth Chang and Ivan Nechepurenko 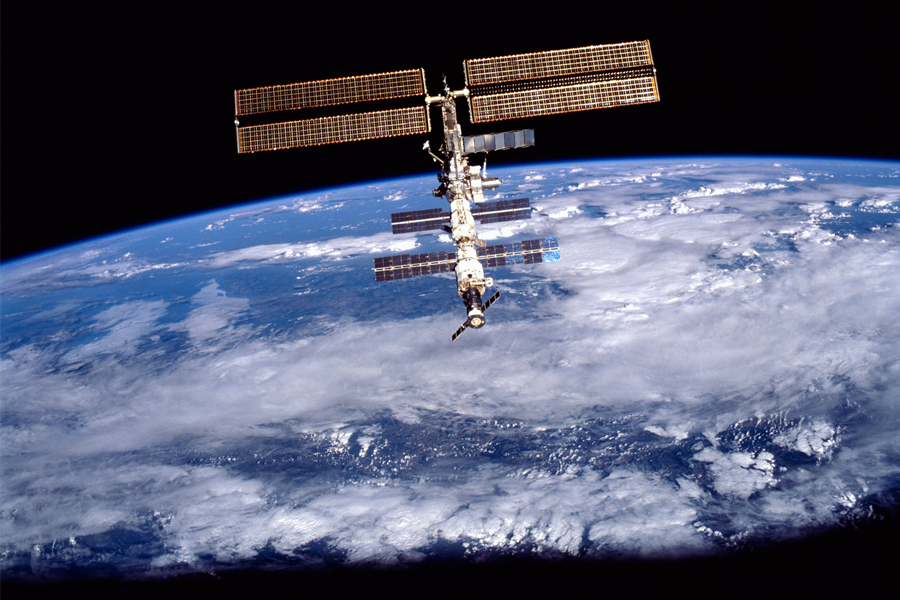 A photo provided by NASA shows the International Space Station in August 2001. The station was built as a symbol of post-Cold War cooperation between the world’s space superpowers. (NASA via The New York Times)

As the race to the moon receded, American and Soviet astronauts met and shook hands in space for the first time in 1975. The United States and Russia continued to work together in outer space, looking beyond their hostilities on Earth, culminating in the 1990s with the two nations jointly building and operating a laboratory in space.

The future of that cooperation grew uncertain on Tuesday as the new head of Russia’s space agency announced that Russia would leave the International Space Station after its current commitment expired at the end of 2024.

“The decision to leave the station after 2024 has been made,” said Yuri Borisov, who was appointed this month to run Roscosmos, a state-controlled corporation in charge of the country’s space program.

The pronouncement came during a meeting between Borisov and President Vladimir Putin of Russia. Borisov told Putin that Russia would fulfill its commitments through 2024 and turn its focus to an unbuilt independent space station. “I think that, by this time, we will begin to form the Russian orbital station,” he said.

With tensions between Washington and Moscow rising after Russia’s invasion of Ukraine in February, Russian space officials including Dmitry Rogozin, Borisov’s predecessor, had made declarations in recent months that Russia was planning to leave. But they all left ambiguity about when it would happen or whether a final decision had been made.

If Russia follows through, it could accelerate the end of a project that NASA has spent about $100 billion on over the last quarter-century and set off a scramble over what to do next. The space station, a partnership with Russia that also involves Canada, Europe and Japan, is key to studying the effects of weightlessness and radiation on human health — research that is still unfinished but needed before astronauts embark on longer voyages to Mars. It has also turned into a proving ground for commercial use of space, including visits by wealthy private citizens and the manufacturing of high-purity optical fibers.

An official at the White House said the United States had not received any formal notification from Russia that it would withdraw from the space station, although officials have seen the public comments.

“We are exploring options to mitigate any potential impacts on the ISS beyond 2024 if in fact Russia withdraws,” said John Kirby, a spokesman for the National Security Council.

Ned Price, the State Department spokesman, said during a briefing on Tuesday that “I understand that we were taken by surprise by the public statement that went out,” and added that Russia’s announcement was “an unfortunate development.”

Bill Nelson, the NASA administrator, said in a statement Tuesday that “NASA is committed to the safe operation of the International Space Station through 2030.” The “after” in “after 2024” in Borisov’s words provides wiggle room for Russia to extend its participation beyond its current commitment.

“This could be bluster from the Russians,” said Phil Larson, a White House space adviser during the Obama administration. “It could be revisited, or it could come to fruition.”

But experts say the announcement clouds the prospect of keeping the station going through the end of the decade.

“The withdrawal will take some time,” said Pavel Luzin, a Russian military and space analyst. “Most likely, we need to interpret this as Russia’s refusal to extend the station’s operation up until 2030.”

Speaking from orbit to a conference about the space station’s research, Kjell Lindgren, one of the NASA astronauts on the ISS, said nothing had changed up there, yet.

“That is very recent news,” he said, “and so we haven’t heard anything officially. Of course, you know, we were trained to do a mission up here, and that mission is one that requires the whole crew.”

For nearly half of a century, beginning with a meeting of American and Soviet astronauts in orbit in 1975 during the Apollo-Soyuz mission, cooperation in space has been seen as a way to build positive relations between the two countries, even when diplomatic tensions remained. The decades of space collaboration have weathered numerous ups and downs in relations between the United States and Russia.

NASA officials, who want to extend operations of the space station through 2030, have expressed confidence that Russia will remain, despite recent shifts in the broader political relationship.

For the most part, operations on the space station have continued without disruption. In March, Mark Vande Hei, a NASA astronaut, returned to Earth in a Russian Soyuz capsule, as planned. NASA and Roscomos just finished an agreement that would give Russian astronauts seats on American-built spacecraft in exchange for NASA astronauts’ getting rides to orbit on Russian Soyuz rockets.

However, this month, NASA strongly criticized Russia after Roscosmos distributed photographs of the three Russian astronauts on the space station holding the flags of Russian backed separatists in two provinces of Ukraine.

Russia has plans for its own space station, but Roscosmos has been lacked the money to do so for years. After the retirement of the U.S. space shuttles in 2011, NASA had to buy seats on the Soyuz rockets, providing a steady stream of money to the Russians. That revenue dried up after SpaceX started providing transportation for NASA astronauts two years ago. Russia lost additional sources of revenue as a result of economic sanctions that prevented European and other nations’ companies from launching satellites on its rockets.

“Without cooperation with the West, the Russian space program is impossible in all its parts, including the military one,” Luzin said.

Russia is also looking to cooperate more with China’s space program, which launched a laboratory module on Sunday to add to its space station, Tiangong. But Tiangong is not in an orbit that can be reached from Russia’s launchpads, and many of the discussions between the two countries have focused on cooperating on lunar exploration.

“The prospect of cooperating with China is a fiction,” Luzin said. “The Chinese have looked at Russia as a prospective partner up until 2012 and have stopped since then. Today, Russia cannot offer anything to China in terms of space.”

Tweets by @forbesindia
Alphabet's quarterly profit falls 14%, on higher revenue
Photo of the day: Ready for the move