The State of the Indian Economy: A Forbes India Analysis

Growth numbers are likely to stabilise in the next few quarters, but there are no signs of a sharp uptick yet 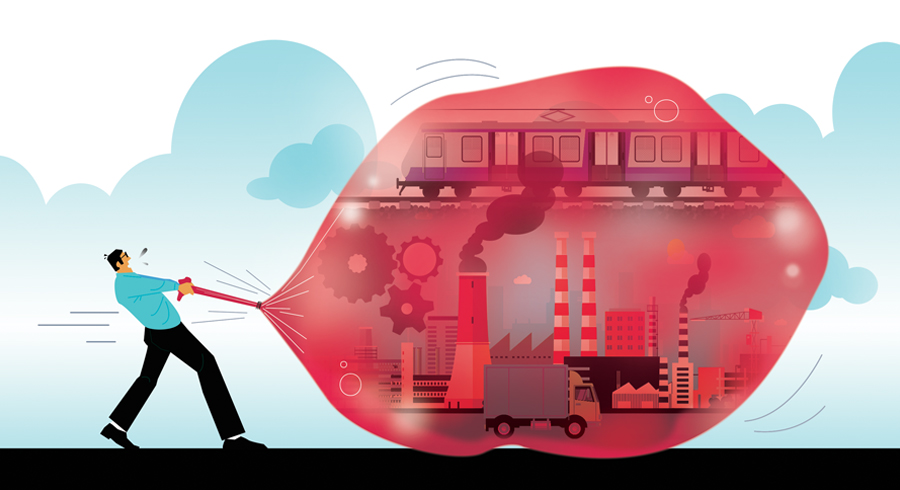 
The retail sales numbers for December pleasantly surprised Maruti Suzuki. At 212,000 units, it was the highest monthly number in the company’s history. “I can’t comment on future months, but for December, at least, it indicated an improvement in demand,” says RC Bhargava, chairman of the country’s largest carmaker. He also pointed to swift sales in October when customers prefer to buy because of the festive season.

In fact, there are indications that Maruti was caught off guard with the increase in demand. Inventory levels at dealers are down to nine days from the usual 30. “We’ll have to restock aggressively in January,” says Bhargava, referring to what economists term as the bullwhip effect.

While it is still early days, Maruti’s numbers, which usually act as a bellwether for the auto sector, could point to a stabilising of consumer demand. Slowing growth numbers and consumer loans that were harder to come by had dented sales for 11 months in a row in 2019. The increase, which may be the result of pent-up demand and an anticipated rise in prices due to the implementation of stricter pollution norms, point to a consumer willing to put money on the table.

As GDP growth slowed in each of the last five quarters, the questions most asked were: ‘Have we reached the bottom and how fast can growth return?’ While the longer-term verdict on whether growth numbers are structurally headed lower is not out, numbers from Maruti and commentary from consumer goods companies point to initial signs of the decline in growth numbers stabilising.Data from disparate sources, the Index of Industrial Production, diesel sales, number of air passengers, electricity consumption and new project announcements all indicate that the worst may be behind us. 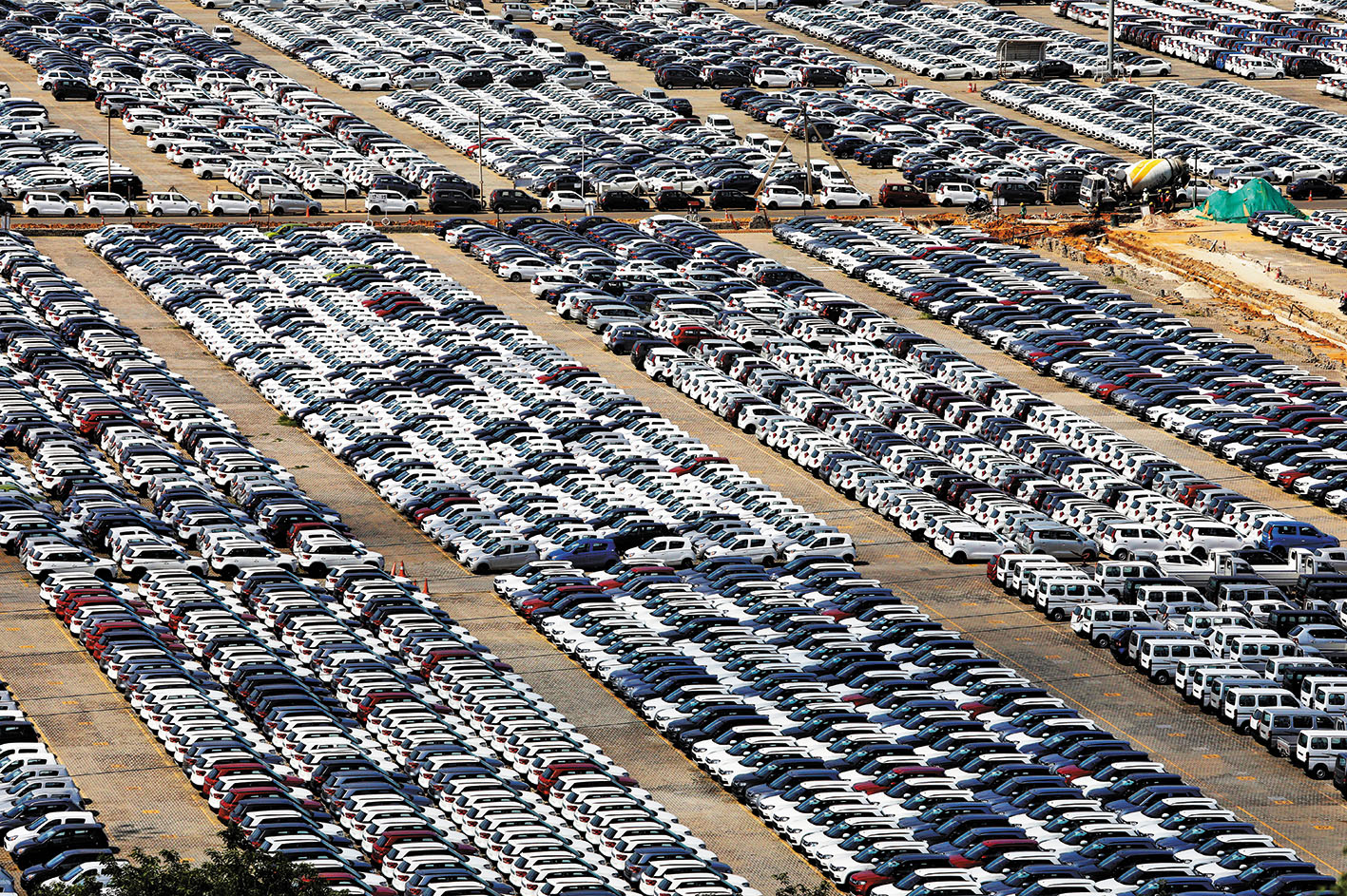 But there are few signs of India reaching the 7.3 percent growth rates it registered in the decade to 2020. The key reason: For the last seven years, the economy has been held up mainly on account of consumption spending and government expenditure. Net exports and investments have been comatose.In the absence of these, the chances of higher growth numbers are low. On January 7, the government-released figure for anticipated 2019-20 growth stood at 5 percent, up from 4.5 percent in the second quarter of the current fiscal. “We have had a standard economic slowdown and now we will have a standard economic upturn,” says Saurabh Mukherjea, founder of Marcellus Investment Managers.

A Consumer-Led Slowdown
Since 2011-12, growth has been overly reliant on consumption spending. In 2017-18, the last year for which statistics are available, it contributed to 59 percent of growth, according to the ministry of statistics and programme implementation. A key component of this growth was the reliance on debt to power spending on everyday gadgets, including mobile phones and washing machines, and high-ticket items like cars and foreign holidays. In the four years since November 2015, the amount of personal loans increased to ₹675,823 crore, with an annual rate of growth of 26.2 percent. 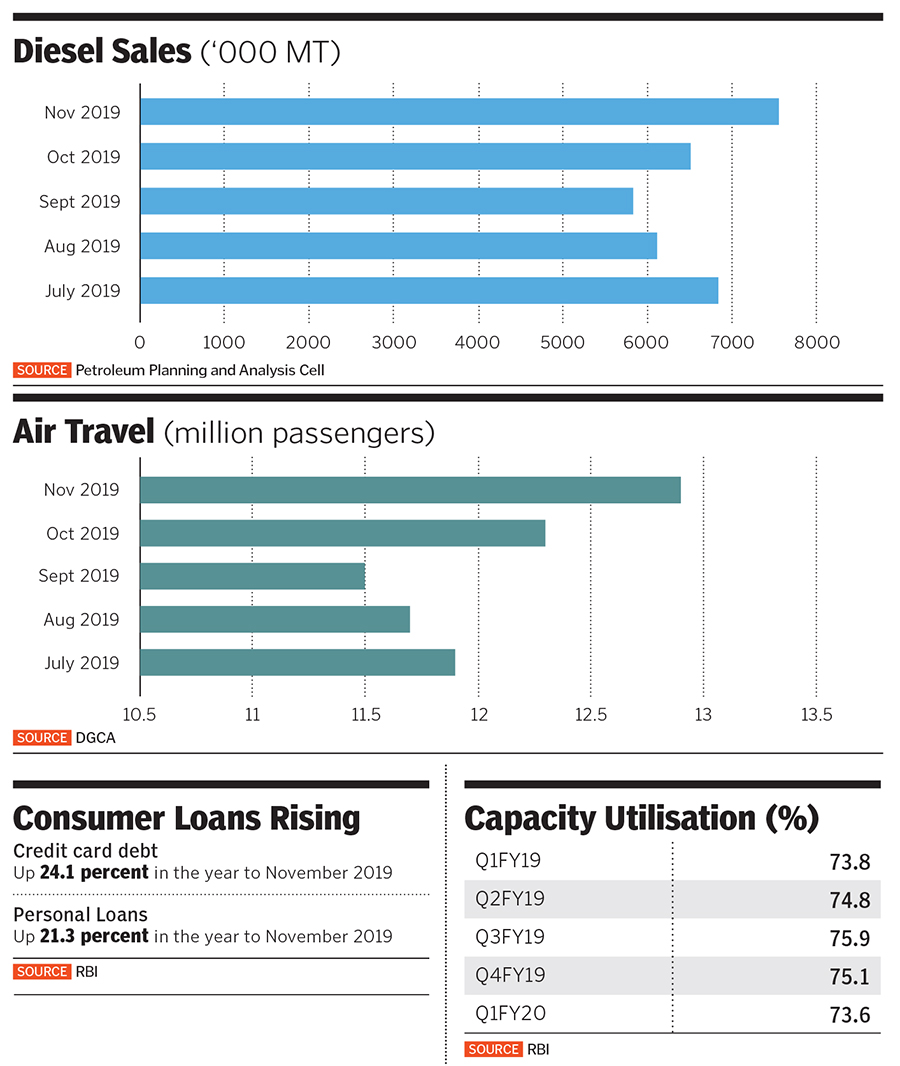 The increase in leverage also coincided with a collapse in inflation, which led to nominal growth numbers slowing down. Companies lost pricing power, debt took longer to pay off and salary increases stalled. Still, a large number of shadow banks and fintech companies continued to push loan products in large part due to their cost of capital falling. (Several government banks with high levels of bad loans and low capital adequacy numbers were prohibited from making new loans.) These were in the garb of zero percent finance schemes as well as short-term payday loans.

The collapse of IL&FS in September 2018 and the freeze in the credit market put an end to the consumer lending boom. Several non-banking financial companies (NBFC) saw their business shrink and consumers as well as small businesses found it impossible to raise money. Sales of cars and two-wheelers went down, dealers of consumer goods were unable to raise working capital loans and real estate companies defaulted on their debt. Growth in bank credit also slowed with an increase of 8.6 percent in November 2019, the lowest in 11 years.

While final numbers for 2018-19 are not yet out, anecdotal evidence suggests that government expenditure in the run-up to the May 2019 elections also slowed. In 2017-18, it accounted for 11.1 percent of GDP, and along with consumption, was the main driver of growth. As sales slid, companies moved to realign production levels to lower demand and orders to their suppliers fell. At 4.5 percent in the second quarter of fiscal 2020, India registered its lowest growth in 26 quarters. In the next few quarters, help could come from an unexpected source—the rural economy. 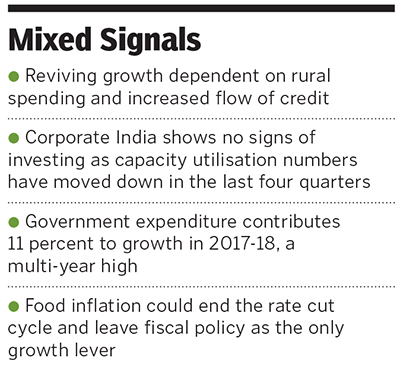 Reviving Growth
The last five years have been tough for rural India. Two important drivers—farming and construction employment—had their terms of trade reversed. As global food prices rose slowly, growth in minimum support prices offered by the government to farmers also reduced. At the same time, the government refused to pass on the benefits of falling oil prices. As a result, farm input prices remained high. In addition, 2014 and 2015 were drought years. Wages for the rural employment guarantee scheme indexed to inflation barely rose.

Since the start of 2019, food inflation has inched upwards with a sharp pick-up since August led by the rise in onion prices. It rose from 3.2 percent to 5.5 percent in the three months to November. At 600.32 lakh hectares, up by 6.8 percent from last season, according to the department of agriculture, the increase in prices has promoted strong sowing numbers for the rabi (winter) crop. A good harvest and rising prices would mean more income for farmers. Still, as former chief statistician Pronab Sen cautions, “The increased sowing could lead to a crash in crop prices. We will have to wait till March to see whether this happens.” 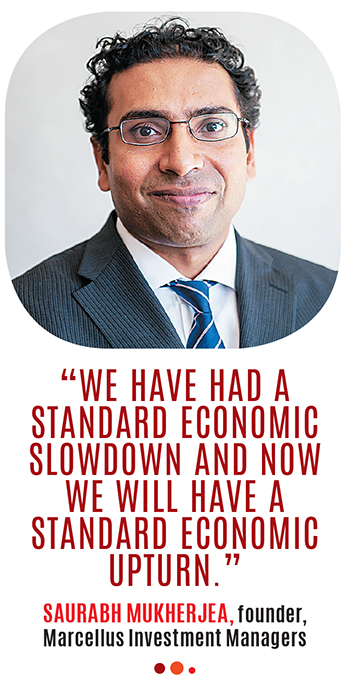 The second driver for growth is the increased flow of credit to consumers. Government banks disbursed loans worth ₹252,000 crore in October and NBFCs have started accessing the credit market and growing their loan book. Credit to small enterprises has started flowing again, albeit at interest rates north of 10 percent. “There was a lack of supply led by tight credit standards and abundant liquidity,” according to a note by brokerage Motilal Oswal. It also points out that a broad-based revival in credit growth may take time as monetary policy has played its role. For now, it is hard to estimate how these can add to growth, but the net result of increased rural demand and more credit flow means growth should stop sliding.

Outside of rural spending and credit growth, there is also the fact that the base effect will kick in from the second half of fiscal 2021, which means growth numbers could start looking better despite relatively slow growth. “The macro data still points to continued weakness and so we do not expect a strong revival,” says Venugopal Garre, director at Bernstein, a brokerage. Most brokerages have forecast growth at 5.1-5.5 percent this fiscal with a likely revision once third quarter numbers are out. In the last four quarters, capacity utilisation numbers have trended downwards to 73.6 percent, leaving little incentive for companies to start investing again. Gross fixed capital formation has steadily fallen to 28.3 percent in 2018 from 34.5 percent in 2007.

Corporate India has used this period to reduce debt, lower promoter pledges on shares and get rid of businesses that are not part of their core. There has also been a resolution of the Essar bankruptcy case defining the rights of operational creditors. This should quicken the pace of decisions under the Insolvency and Bankruptcy Code. One area that could present a risk is loans given to the real estate sector, which stand at ₹500,000 crore, according to data compiled by consultancy CRE Matrix. Slow sales loans to this sector could go bad if nominal growth doesn’t pick up. In a recent paper, former chief economic advisor Arvind Subramanian said this could lead to a second wave of bad loans for banks.

Besides, over the last five years, merchandise exports have been stagnant at an average of $310 billion a year. This has been partly due to petroleum products and gems and jewellery, which contribute to about a third of exports. As global oil prices fell, the value of India’s petroleum exports too slid. Since then the number (for petroleum products and gems and jewellery) has fallen to 26 percent. There is now evidence that the government wants to provide business-specific incentives to get exports going. “Since value addition in textiles is low, we have argued that electricity and logistics costs should be lowered and tax refunds need to be made quickly to let us compete with Bangladesh and Vietnam,” says Mohit Jain, vice chairman of Indo Count, a textile exporter. He says the government has heard them out. Last year saw auto components, mobiles, textiles and specialty chemicals register strong numbers, according to the Directorate General of Foreign Trade. If this continues, exports could turn out to be a small-yet-significant lever of incremental growth.