Is Cyprus More Important Than You Think?

Contagion, through capital flight, may be a real risk 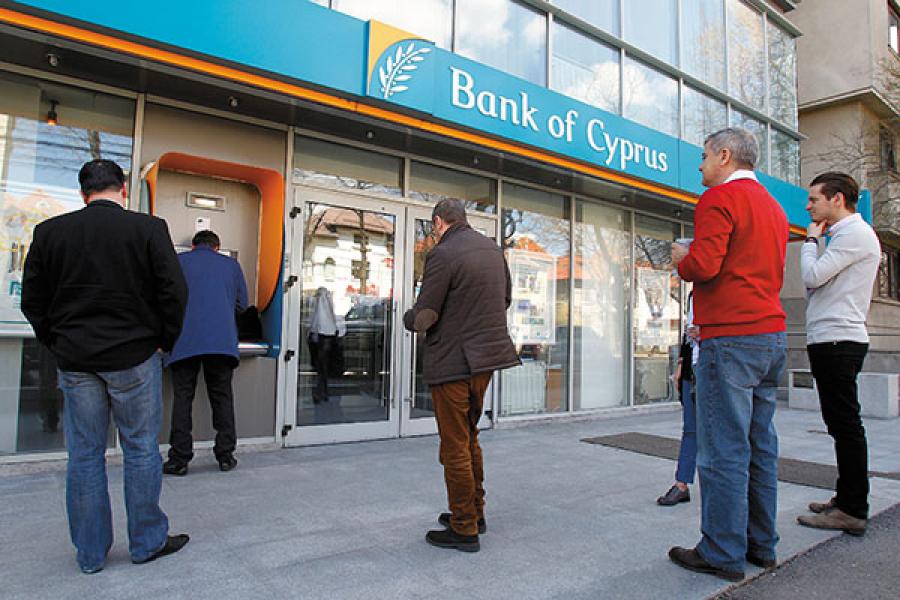 In 1938, British Prime Minister Neville Chamberlain’s speech decided to ignore “a quarrel in a far-away country between people of whom we know nothing”. The world has now convinced itself that Cyprus is simply not systemically important. They may be proved wrong.

First, the package for Cyprus remains vague pending analysis by the Troika—the European Union, the European Central Bank (ECB) and the International Monetary Fund (IMF). Based on press reports of rising losses for the Cypriot banks, the problems may be worse than imagined, requiring changes to the bailout or making it unworkable. The Church of Cyprus is contesting the legality of some measures taken under the European convention of human rights which makes the expropriation of property illegal. There is a risk of further legal challenges.

Second, as with Greece, the package may not work. As in Greece and Portugal, privatisation proceeds and the revenue from increased taxes may not reach targets. The bank restructuring plan may not raise sufficient funds. It will encourage remaining deposits to flee Cyprus if and when capital controls are eased, compounding the problems. As with Greece, there is a risk that Cyprus will need additional assistance.

The proposed restructuring effectively cripples the Cypriot banking industry, which is a major part of the economy and employs over 50 percent of workers. The transfer of losses to depositors and imposition of capital controls make it highly likely that activity will shift to other locations.

The crippled financial system as well as the effect of capital controls and uncertainty on tourism will mean, at best, a prolonged recession. Economic activity in Cyprus is expected to contract by between 15-25 percent over the next few years. Unemployment will also rise. This will make it impossible for Cyprus to meet targets and repay the bailout debt, necessitating further assistance and/or future debt restructuring.

Third, the guarantee of small depositors (up to 100,000 euros) is from the insolvent Cyprus government. EU bailout funds cannot be used to support the banking system, which urgently needs a capital infusion. Small depositors are also affected by “temporary” capital controls. Residents cannot withdraw more than 300 euros in cash per day. Local businesses have to limit transactions to 5,000 euros a day. So will credit card transactions. Travellers cannot take more than 1,000 euros in bank notes out of the country per trip.

Capital controls may need to be in place for a prolonged period. They are still in place in Iceland over five years after introduction. Small depositors’ cash remains trapped and at risk in any future restructurings.

Fourth, the EU’s “new” position towards bailouts, shifting losses onto shareholders, bondholders and depositors, is unworkable.

To date, European as well as the UK and US governments have protected all creditors, including subordinated bondholders of failed banks, to avoid the risk of contagion and triggering a wider financial crisis. Germany bailed out depositors in IKB. Similarly, the government did the same for major Dutch banks until the recent case of SNS. There have been minor exceptions in Denmark, Ireland, the UK and Spain.

Alternatives such as Cyprus leaving the Euro and restructuring its bank and sovereign debt were ignored to avoid losses to the ECB on its 9 billion to 10 billion exposure to Cypriot banks and to European banks on holdings of Cypriot government bonds.

As in previous European bailouts, the funding is mainly to be used to refinance existing debt owed mainly to European banks and investors. About 7.5 billion euros of the proposed Cyprus package will be applied in this way.

Whatever its merits, allocating losses to investors and bondholders may prove challenging in practice.

Any attempt to write down bank or sovereign debt of troubled nations would result in large losses to European banks, mainly in the North European countries. The EU has conveniently forgotten that the bulk of Cypriot bank losses resulted from write-downs to loans to the Greek government, overseen by the EU.

Cyprus has merely highlighted Europe’s “doom loop” linking European banks and sovereigns. This will make it difficult to pursue the policy that investors must be accountable for the risk they take, recently articulated and then quickly disavowed by Jeroen Dijsselbloem, the President of the Eurogroup (an informal gathering of the finance ministers of the countries who use euro as their currency).

Fifth, German Finance Minister Wolfgang Schaeuble’s position that “savings accounts in Europe are safe” contrasts sharply with his earlier statement that deposit guarantees were “only as good as a state’s solvency”. The absence of a Europe-wide deposit insurance scheme and lack of funding for recapitalisation of banks (both opposed by Germany) means that all depositors are vulnerable, continuing the risk of capital flight.

Sixth, the accusations of Cypriot money laundering and tax evasion to justify the structure of the package merely expose the EU’s politically expedient hypocrisy. The EU, and especially Germany, wants to prevent any bailout funds flowing to Russian depositors, oligarchs or organised. However, as of January 2013, 43 billion euros of the 68 billion in Cypriot bank deposits were from domestic residents, although a portion may be from overseas depositors. There are around 60,000 British retirees and 40,000 Russians living in Cyprus.

Cyprus developed banking and business services to supplement its tourism industry. In part, this reflected the loss of its agricultural and industrial base after the Turkish invasion of 1974. Cyprus used low corporate tax rates, extensive dual taxation agreements and liberal immigration to attract business from Europe, the Middle East and Russia.

Cyprus is a low tax jurisdiction, not a tax haven. Tighter controls over money laundering were a pre-condition to EU entry. These problems have not previously prevented the ECB from offering emergency funding assistance to Cypriot banks.

Seventh, the EU deliberately used a recently-enacted rapid resolution regime for distressed banks to avoid the need for Cypriot parliamentary approval. The subversion of democracy means rejection of the bailout remains possible. This is compounded by the fact that ordinary Cypriots are angry about what The New York Times described as their “economic ex-communication” from the EU.

This is exemplified by the EU agreement to implement capital controls. By indirectly devaluing Cypriot euros and effectively creating a two-tier euro (convertible versus non-convertible), the EU has undermined the concept of a single currency in the long term.

For the EU, Cyprus represents the familiar continuation of its serially clumsy efforts to deal with insolvent banks and countries. It also continues the strategy of ensuring that embarrassing losses are deferred past crucial election dates or even more desirably until someone else is in power.

Cyprus also marks a new dangerous phase in dealing with current debt crises. The high levels of debt cannot be managed without resorting to financial repression. To date, this has taken the form of higher taxes, interest rates below the rate of inflation, directed investment and increased government intervention in the economy. Governments are now seeking to shift the burden increasingly onto savers and investors directly by confiscating savings, such as bank deposits and pension funds (an option considered in Cyprus).

Contrary to popular mythology, deposits with a bank are always only as safe as the institution itself or the ability of the guarantor of the deposit, including governments, to meet any insurance obligation. In Europe, deposits of banks are backed by loans to highly leveraged governments, banks, companies and individuals with varying capacity to repay. The deposit guarantees are provided by the same leveraged governments.

Bundesbank President Jens Weidman has pointed to Cyprus as a successful example of how to deal with delinquent banks. The EU’s head of economic affairs Olli Rehn confirmed the approach, while sticking to the standard position that Cyprus was exceptional. Rehn re-affirmed the deposit guarantee of (up to) 100,000 euros, which made these “safe”. But without an EU-backed deposit guarantee scheme, this relies on weak governments.

The rapid resolution rules used in Cyprus to write off bank deposits are part of new banking regulations adopted widely throughout the world. No savers or investors anywhere should take security of their assets as guaranteed.

Contagion, through capital flight, is now a real risk. As a Cypriot banker told a reporter: “… Luxembourg, Slovenia is coming … We should give them seminars on risk issues.”

While Cypriots labour in financial purgatory on their way to economic hell, citizens in far-away countries may reflect on John Donne’s words: “No man is an island, entire of itself …. never send to know for whom the bells tolls; it tolls for thee.”

(Satyajit Das is a former banker and the author of ‘Extreme Money ’ and ‘Traders, Guns and Money ’)