There has been a distinct change in business culture: Sanjeev Sanyal

The principal economic advisor to the ministry of finance on the government's successes, its focus on micro solutions, and reforms needed for economic growth 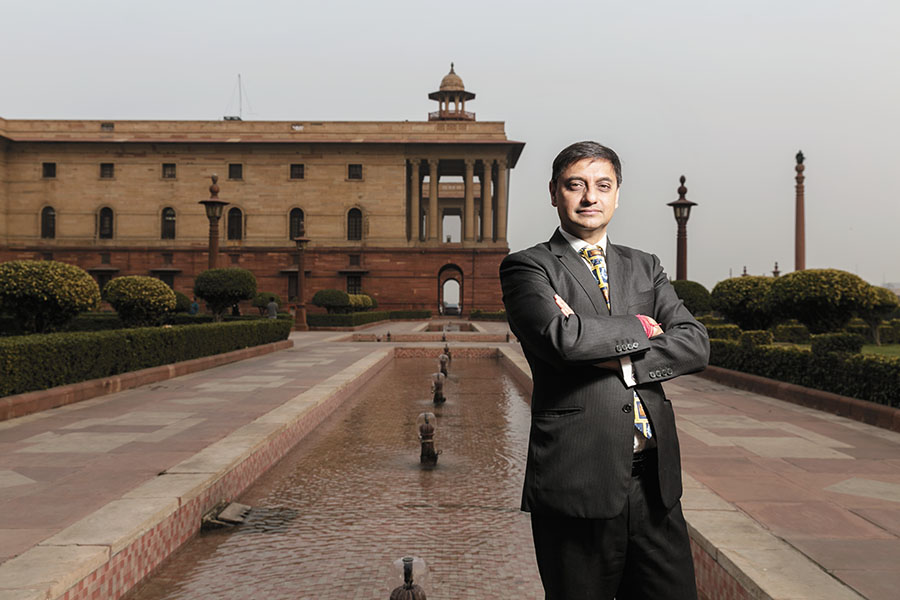 Sanjeev Sanyal believes it will take a couple of years to stabilise the system after GST
Image: Madhu Kapparath
Sanjeev Sanyal, principal economic advisor to the ministry of finance, is confident that the government will be able to meet its fiscal deficit target for FY20. The cost of capital is cheap and allocation of capital from banks is improving, he says. Sanyal—whose latest book, India in the Age of Ideas, calls for the need to think of a new framework for India’s history, economics and urban design—believes that the next government must focus on reforming the legal and administrative systems, lack of which will be the biggest roadblock to further growth. Edited excerpts from an interview:

Q. The government has revised its fiscal deficit target from 3.3 percent to 3.4 percent for the next financial year. Will it be able to meet it considering the massive income support scheme for farmers?
What people do not realise is that the single major item which leads to the deficit is interest payments. Excluding that, the government has been well-behaved for quite some time on the primary deficit (which is 0.2 percent of GDP). There is no particular reason to be concerned that there will be a slippage.

There have been some shortfalls in the Goods and Services Tax (GST), but collections in direct tax and customs have been better than before. International experience shows that the benefits of GST will start to kick in soon and that will help.

Q. I was coming to the GST shortfall. Will the gap get covered now?
It takes a couple of years for stabilising the system. The finance minister has signalled more simplification. The first step was to make sure that it [GST] works, the second year is to smoothen it out and in the third year you will see the benefits.

Q. The government focussed on affordable housing for the low-income group. Is the shift now towards meeting the expectations of the middle class?
For the last four-and-a-half-years, the biggest focus of the government was to restore macro-stability in the economy. The effort was to clean up the banking system, control inflation and create rule-based framework for governance in the form of the Monetary Policy Committee, the Insolvency and Bankruptcy Code (IBC), GST and even the Jan Dhan Yojana-Aadhaar combination. From here on, there will be greater focus on select problems and select groups, so we are moving from macro to micro solutions.

Q. Which were these issues?
One relates to farmers. The aim since the Green Revolution was to produce more food to avoid starvation [and dependence on imports]. The problem now is of over-production. One cannot use tools of the past. If you subsidise inputs more, you are also leading to more food production. Same would happen if one muddles around too much with minimum support prices and procurements. If on an average we are in excess [food production], we can’t keep storing more food. We need to support farmers in an environment of excess food production, where population growth is slowing. So we are using direct income transfers [the recently announced Pradhan Mantri Kisan Yojana] for farmers, which will be less distortionary than input subsidies or crop procurements.

“ By anchoring inflation, India is in a position to structurally lower the cost of capital.”

Q. Bankers argue that farm waivers is not the best solution…
Precisely…we are moving the debate away from input subsidies or farm loan waivers (these are also subsidy to capital). We are providing a top-up to compensate for crop price declines.

Q. India’s macroeconomic data points are improving, in terms of easing oil prices, lower inflation, stable currency…
One of the big successes of this government has been to structurally lower inflation. [CPI inflation was down to an 18-month low of 2.19 percent in December 2018]. By anchoring inflation, India is in a position to structurally lower the cost of capital. With the cleaning up of the banking system and NPAs falling, the allocation of capital is starting to improve. Both of these are necessary to sustain economic expansion.

Q. Credit growth has picked up. Do you see banks in a better position to lend now?
There has been a distinct change in business culture, both in terms of borrowers and lenders, where before a case arrives to the IBC, recoveries are taking place. The culture of taking loans and not caring to repay them has changed, irrespective of what the IBC does. By the end of March 2019, `3 lakh crore of funds, earlier assumed as write-offs, will come back into the system. As the process gets tested, it will get regularised better.

Q. Which areas need more structural reform?
The next set of reforms should be in the legal space. Considering that we run a market-driven economy, enforcement of contract is what allows individuals, corporates or state-owned entities to conduct business. There are at least 34 million cases pending in courts. The [lack of enforceability] is the biggest roadblock to economic reforms. We also need to reform the bureaucracy; we have an administrative system which is dysfunctional today.

Q. Why is your book, India in the Age of Ideas, a collection of essays?
It is a collection of articles written over a decade, selected in a way to put together a new framework. The Nehruvian period created a philosophical framework of thinking about the world. We took a colonial way of thinking and overlaid it with a Nerhuvian way of thinking. In 1991, we opened the system up, but did not replace the Nehruvian socialist worldview with something else.

So the default option of our thinking—in academia, government or intellectual classes—always drifts to the Nehruvian mindset. We did a critique of that framework, but have not replaced it. This book attempts to provide an alternative way of thinking derived out of complexity theory.

Q. We do not think out of the box….
We decided the box was flawed but did not climb out of it. Our history books are flawed...unfortunately we are unable to climb out of this, but when we try to do so, we go into a largely pointless debate that we will have right-wing biases now. The debate should not be about how to perpetuate past lies but how to write a new narrative based on facts.