A glass apart: Rs 65 lakh for a litre of water 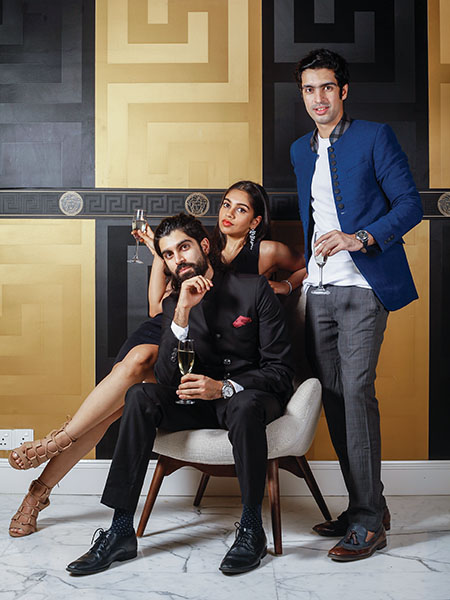 From left: Mohit Bhatia, Prerna Bhatia and Ashish Bhatia of Malaki. In a month since its soft launch in India, the company has sold 3,000 units of its gold water
Image: Aditi Tailang
Would you pay ₹65 lakh for a single litre of water?

The bottle comes encased in a custom box set, complete with four engraved Baccarat crystal tumblers. “Beverly Hills 9OH2O is superior spring water from the California mountains and the first ever water product to capture the best of everything: Taste, health, design, and experience,” says Martin Riese, a leading global water sommelier and part of Beverly Hills 9OH2O’s team of experts. “Its exquisite design is made of the highest quality material and captures the classic elegance and glimmering vitality of Beverly Hills, California. We’re looking for new distribution partners and would love to come to India.”

The company is headquartered in Beverly Hills, California, and aims to launch in India later this year.

Beverly Hills isn’t the only one toasting to the country’s new-fangled want for a stylish sip. A market once dominated by Evian and Perrier is now seeing a pulse of activity. Mumbai-based Malaki, a retailer for gourmet food and beverages (F&B), had a soft launch for the Malaki Luxury Water—which comes swimming in edible 24-karat gold flakes—in May. In November 2017, IRIIS Food, an e-store for premium F&B imports, introduced a natural, black-coloured water. Blk, a Los Angeles-based product, comes pumped with fulvic minerals and antioxidants that turn the water naturally dark and alkaline, giving it various healthy properties.

An older entrant is Finnish water brand Veen, which has been in India since 2014. Packaged in swanky glass bottles, the brand has partnered with most major hotel chains and many premium restaurants across the country, making India its largest global market.

According to market research firm Mintel, the Indian market for packaged drinking water was valued at ₹87.86 billion in 2017 and is estimated to reach ₹109.84 billion in 2018. Bottled water in India grew at 19 percent between 2016 and 2017—outpacing all other global markets.

There’s an increased willingness among consumers to pay for premium bottled water, says Alex Beckett, associate director, food and drink, at Mintel. “India has a fragmented and comparatively unregulated bottled water market, but big, global companies appear keen to expand their presence in the country.”

While a 500-ml bottle of Bisleri costs ₹10, prices for premium water can go up to ₹300 for the same quantity. The gold-infused Malaki water retails at ₹599 for 375 ml.

Pots of gold
In a month since its soft launch, Malaki has sold 3,000 units of its gold water, retailed exclusively at Mumbai and Delhi’s international airports. In August, the product will see a full-fledged launch and will be available for retail, at fine-dine establishments.

“In the olden days, people used to put water in gold canisters to derive health benefits,” says Ashish Bhatia, founder of Malaki. “This is a modern extension of that philosophy, and we’re the first Asian brand to introduce such a product.”

The 24-karat edible gold flakes are imported from Dubai, where Malaki has a head office, but the water is bottled in Mumbai. The liquid is purified and neutralised in the city.

Gold-charged water is said to help with asthma, arthritis and skin ailments, and increase stamina and relaxation. “It has several benefits,” says Bhatia. “It makes for a great gift, especially for those who do not consume alcohol.”

The idea came after Malaki tasted success with some of its bestselling products, a range of luxury teas. “Tea is the second-most consumed beverage in India—the first is water,” says Bhatia. “We were keen to enter the water market, but not in a run-of-the-mill fashion. That’s how the luxury gold water was born.”

Malaki will soon also introduce a variety of alkaline water. Two new variants are at the research stage, including hydrogen water. 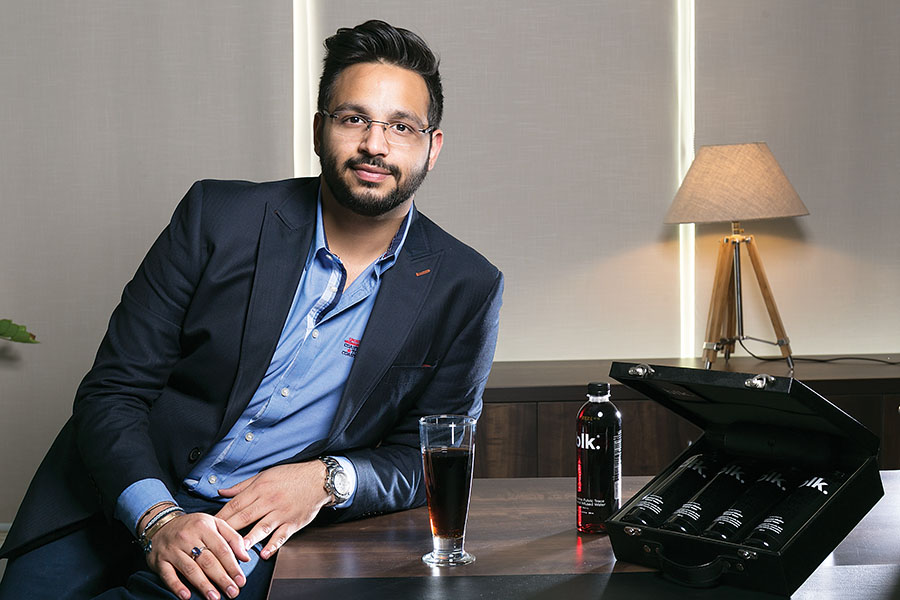 Dikshit Jhanb, director of Blk in India, admits that the brand’s premium alkaline water product is for fit and rich people
Image: Madhu Kapparath
The Dark Side
According to Dikshit Jhanb, director of Blk in India, many health concerns, especially in India, stem from poor digestion. “Diseases are more likely to occur in bodies that are acidic. Cancers spread quicker in such an environment too,” says Jhanb. “Indian food is inherently oily and acid-inducing, so we were keen to introduce alkaline water in the country.”

Blk is a premium alkaline water brand sourced from Los Angeles. It is available in 17 international markets.

While regular drinking water has a pH level that hovers around 6 that of Blk water is 8.8+, making it alkaline. A pH of 7 is considered neutral.

It is naturally black; the liquid looks like a cola, but tastes just like regular water. Purified alkaline water forms the base of Blk, sourced from multiple locales, including springs and aquifiers in the US and Canada. This water is alkaline at the source and flows through plant roots that contain fulvic minerals. These minerals give it its dark shade. Blk water contains 77 naturally-occurring trace minerals, trace elements, amino acids and electrolytes. No additional dyes or colours are added in the water.

Blk has been spotted with stars such as Kendall Jenner and Paris Hilton. In India, it’s been endorsed by Indian skipper Virat Kohli, actors Aayush Sharma and Ronit Roy, among others. It retails at the Hyatt hotels, at premium food stores such as Foodhall and at the Delhi and Mumbai airports.

“The response has been tremendous; we have more than 80 customers who subscribe to Blk for home delivery every day,” says Jhanb. “The biggest challenge has been to create awareness about the benefits of going alkaline, and getting people used to the colour of the water.”

Alkaline water, he adds, is not a replacement for regular water; adding one bottle of it a day can help reverse acidity.

Malaki will also introduce an alkaline water soon, with a proposed pH of up to 9.5. This water will be sourced from the Brahmaputra river originating at the Angsi Glacier located in Tibet and flowing into Assam, where the company has a processing plant. The water is made alkaline by passing it through a mineral bed and having it undergo the process of ionisation. “Alkaline speeds up the hydration process,” says Bhatia.

Bhatia’s sister and Malaki’s marketing director Prerna Bhatia, a yoga teacher, encountered alkaline water while travelling. “A friend suggested it and I noticed it helped me last longer during a workout and feel less sore,” she says. “We decided we must introduce it in India.”

Malaki’s alkaline water will be priced at ₹60 for a 500-ml bottle and ₹40 for the same on the subscription plan. It is likely to launch in August. 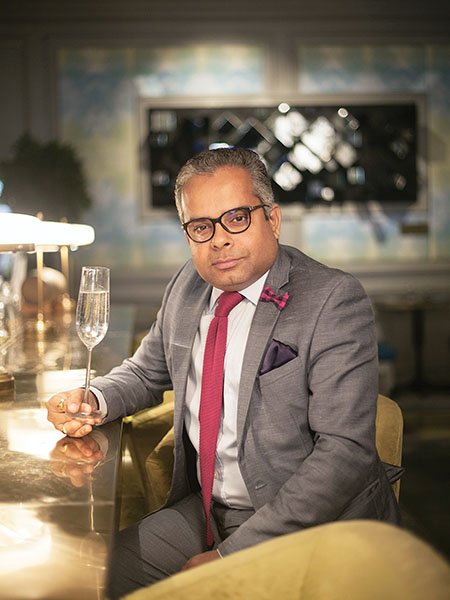 Veen is nicknamed the ‘Michelin-star water’, says its India sales head, Ganesh Iyer
Image: Aditi Tailang; Location Courtesy for Veen: The Runway Project by Pizza Express
Bottles Up
Veen is a Finnish brand that is majority-owned by an Indian, Aman Gupta, based out of Munich. It entered India in 2014 to fill the market gap for premium-packaged glass bottles. “Plastic will never look as classy as glass does,” says Ganesh Iyer, sales head for Veen in India.

Veen, he says, is nicknamed the ‘Michelin-star water’ since it is served at a host of Michelin-starred restaurants around the world. “Aside from the visual difference, glass is much safer to use than plastic and can be easily recycled and reused. Moreover, water doesn’t react with glass in heat or humidity as it does with plastic,” he says.

The liquid is heavy mineral water sourced in Bhutan. “Bhutan is the world’s first carbon-negative country, so the water is absolutely pristine,” he adds. “Most water available in India is from the Himalayan belt, with few differentiators. Many varieties sourced from Himachal Pradesh, for instance, have high nitrate values because of the growing number of factories around.”

Growing at 53 percent year-on-year and present in 38 cities, India is now Veen’s largest global market. “In the West, where local tap water is clean, people are unwilling to pay for water. In China, there’s a lot of competition from other brands with deep pockets,” Iyer says. “The route to market in India is difficult, but once you’re in, you have a ready audience. Moreover, coming to India from our plant in Bhutan is easier than going to China.”

A 660-ml bottle of Veen still water is priced at ₹350 while sparkling is ₹450. Hotels can mark up the prices slightly.

In six to 10 months, Veen is likely to launch a range of craft mixers—ginger ale, bitter lemon, club soda and tonic water—along with a line of ayurveda waters, enhanced with amla, ginger and turmeric. These products are already available in Veen’s other markets.

Testing the Waters
“Some of the differentiators such as 24K gold tap into existing belief systems like ayurveda, so consumer trial might be high,” says Kiran Khalap, co-founder and managing director of marketing agency Chlorophyll. “In economies like ours, existing products often get repurposed into luxury items and cater to those who have no avenues left to splurge on. I remember paan being sold for ₹450 in Nagpur.”

The packaging may be the invitation card, he adds, but the proof will be the product itself.

“There is some scientific base to this, but more research is needed,” says Anjali Mukherjee, nutritionist and founder-director, Health Total. “Alkaline water, for instance, is desirable—rich in minerals and oxygen; it may help expedite their journey towards better health and support in removing toxic waste. However, a body’s acidity is due to various factors. Lifestyle diseases are complex and no single product can easily fix them.”