Amaan and Ayaan Ali Khan talk about being the sons and disciples of Ustad Amjad Ali Khan, performing solo and as partners, and representing a centuries-old tradition to younger audiences 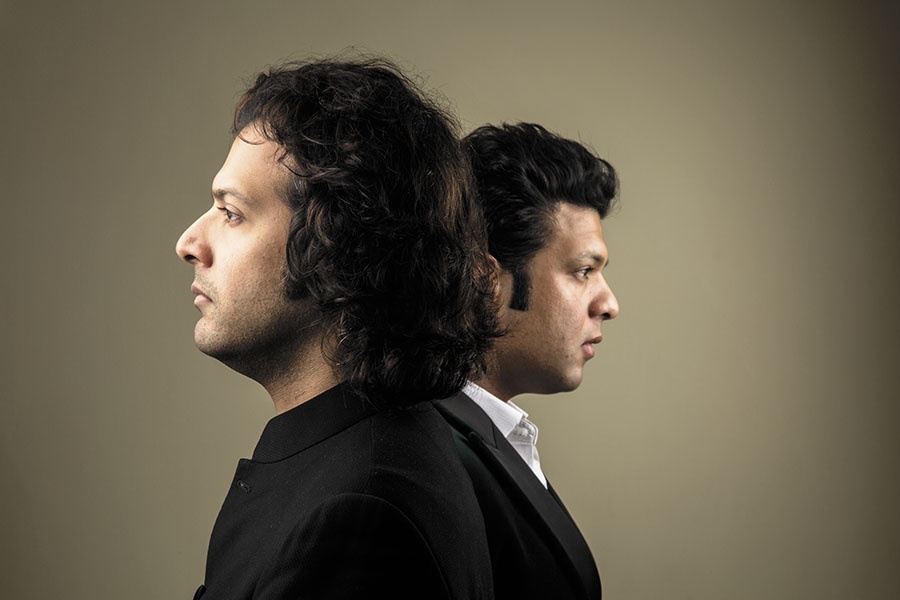 Amaan and Ayaan Ali Khan aren’t quite the hyphenated siblings they are perceived to be. They don’t complete each other’s sentences, their music choices can be as different as Mika Singh and Coldplay—Amaan swears by something “loud”, Ayaan insists on “pleasant”—and, when they were young, Ayaan was the artiste who would rather paint or listen to music, while Amaan the “ziddi boy” was more into sports. A rare moment of convergence in their individual journeys came well into their teens, when the boys decided in unison to professionally practise a craft that their ancestors—who came from Afghanistan and played the rabab, from which the sarod has been modified—are said to have discovered, and further a musical legacy that has permeated through six generations of the family. Their conviction has been vindicated over three decades, as the duo has not only established itself as classical musicians in the country, but has also won international acclaim by performing at prestigious venues like the Sydney Opera House, London’s St James’s Palace, the Carnegie Hall in New York, and at events like the Nobel Peace Prize ceremony (in 2014).

Music was omnipresent in the Khan household, Amaan and Ayaan being the sons of sarod maestro Ustad Amjad Ali Khan and Subhalakshmi, who trained in Bharatanatyam under acclaimed exponent Rukmini Devi Arundale. Although their father would keep humming, and get them to sing along to identify the notes, music wasn’t thrust on them as a career, at least not overtly. “Abba never stopped us from doing anything else,” says Amaan. “But he didn’t encourage anything else either. Our parents conveyed to us pretty early in our lives that music was our greatest wealth and it was the only thing that we inherited.”

Their initiation to the stage was pretty early, when Amaan, now 40, was 9 and Ayaan two years younger. Ustad Amjad Ali Khan had put up an orchestra at the Siri Fort Auditorium in Delhi to mark the 40th anniversary of Unicef in 1986. At that time, the applause and adulation was “fun”. But things turned in just a few years, when the duo joined their father to perform at Logan Hall in London at an event to give away an award in the name of their grandfather Ustad Hafiz Ali Khan.

The programme had senior artistes in attendance and, as Amaan puts it, their performance didn’t match up to their father’s expectations. “That night, Abba was missing from the dinner table. He had retired to his room with fever. It was because of the embarrassment we had caused him at the concert,” he says. It was a watershed moment for the brothers as, in his own quiet way, Ustad Amjad Ali Khan had taught them that art was to be revered, and not taken for granted. Says Ayaan, “Incidents like these made us feel responsible to the craft. When we perform, we are aware that we are not just taking forward our musicality, but are also representing many great musicians of our family who have contributed to the art form.” 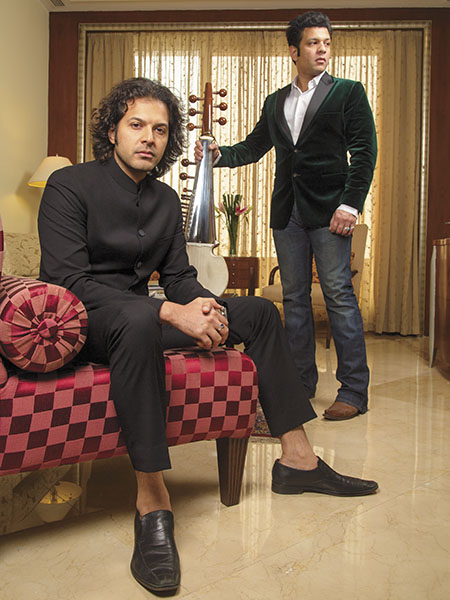 String theory: The siblings are carving out their own identities while retaining what they have inherited
Image: Joshua Navalkar
Being a classical musician isn’t the easiest thing on the planet. It’s not a whim, but a way of life, a matter of temperament. You may have truckloads of talent, but there’s no escaping those hours of rigorous, monotonous practice. At a time, when their friends would be charting future career paths—discussing whether to apply to Wharton, Harvard or Dartmouth, for instance—Amaan and Ayaan would spend hours internalising the slides and glides of ragas, sometimes debating if it was all worth it. It was in these moments of self-doubt that Ustad Amjad Ali Khan stepped in, reassuring them, as a father, of his unconditional support and, as a guru, of their talent. “He told me that ‘I think you have been blessed with a craft. You should try and enhance that’,” says Ayaan.

For many, the constant changeover between the roles of a son and a disciple would be confounding; when exactly does one flip the switch? But for Amaan and Ayaan, the frequent transitions have been seamless and a great asset in their relationship with their father because of the continuous learnings that resulted from them. One moment, they are sitting with their father, and the next, during a short walk from the dining table to the door, he could turn into a guru, teaching them a composition. “It’s like a dual citizenship. One doesn’t come in the way of the other,” says Ayaan. Music has also shaped a unique camaraderie between the father and sons, and has been a source of sustenance for the trio on this meditative journey. “Abba is a loner, he usually doesn’t do duets. Now, he’s got two companions with whom he can discuss music. That’s the beautiful aspect of this entire journey,” adds Amaan.

Somewhere in this journey was also the beautiful evolution of Ustad Amjad Ali Khan, not just as a father but also as a person. He stood behind his sons like a rock when many in the fraternity were up in arms against them for hosting the music reality show Sa Re Ga Ma Pa in 2000-01 on Zee TV and trivialising the art form in the process. “We never had to convince our father about it. He knew about the changing times,” says Amaan. Besides, an opportunity to become household names overnight would also help them familiarise the audiences with sarod. “We used it to our advantage as long as we didn’t turn into typical anchors shooting all day and skipping riyaaz.” 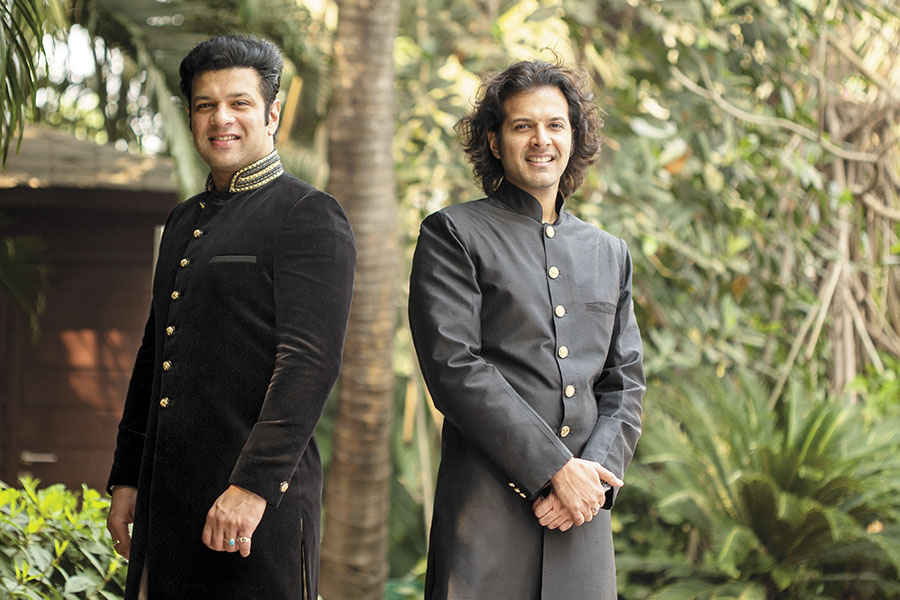 Comfortable as they are in each other’s company, the brothers are also slowly branching out into solo performances, independent of their father as also of each other. While they do a lot of solo concerts, particularly in India where they barely play with Khan senior, it was at the prestigious Dover Lane Music Conference in Kolkata this January that each of the three, for the first time in their careers, put up solo performances at the same event.

“Sometimes, it can be encouraging, but there are also terrifying moments when you face the big challenge of playing the same instrument as your brother and father, and yet try to bring out a different flavour,” says Amaan. But going solo isn’t something that the siblings will do for the heck of it. “Being rebellious, doing things just so that you look different is when you start going on the wrong track. We don’t want to do that.”

With their international collaborations—that have ranged from American folk singer Carrie Newcomer, Grammy nominated violinist Elmira Darvarova and, most recently, Indian-American musician Karsh Kale—Amaan and Ayaan are taking sarod and their music to a global audience. One of their fondest memories is of jamming backstage at the 2014 Nobel concert, with the likes of Queen Latifah, Will Smith and Steven Tyler. “It was like having a concert in the greenroom. They don’t look towards India for Bollywood; they have their Hollywood. They come here for the cultural melee,” says Ayaan.

In 2015, they met Joe Walsh (formerly of James Gang and Eagles, among others), one of the finest rock-and-roll guitarists, who has taken a fancy to the sarod. “He has started playing and says he needs some more practice,” Ayaan chuckles.

While the brothers are aware that classical music is for a niche audience, where trainee musicians “arrive at the scene” only when they are past 35, they admit that they see a lot of younger audiences these days. “Till the 1940s and ’50s, this art form was only for the royalty, then it moved to concert halls. But over the last few decades, even colleges are hosting classical music nights. We cannot compare classical music to Bollywood music—they are like chicken tikka and sushi—but these definitely are encouraging signs for the art form,” says Ayaan.