Art galleries: Homing in on heritage 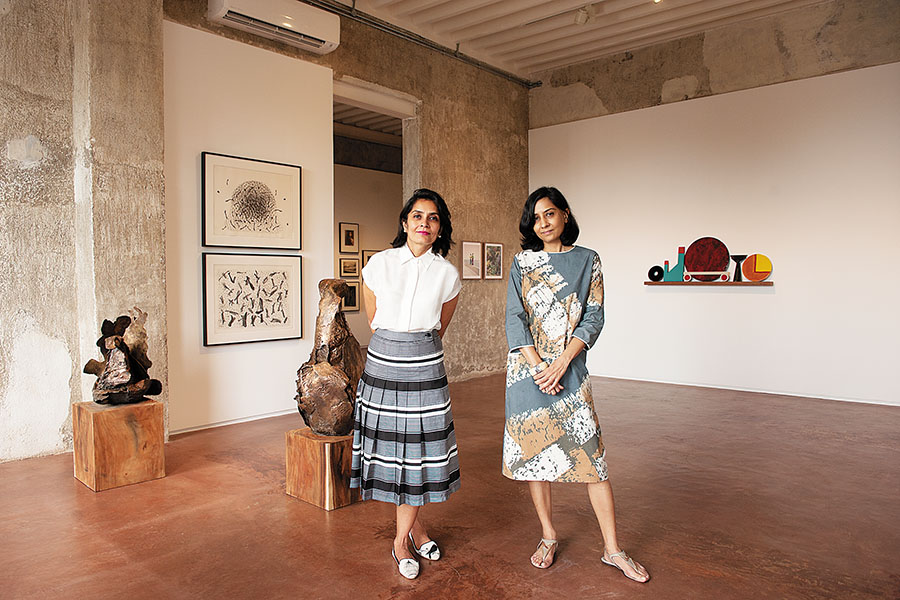 Amrita (left) and Priya Jhaveri at the new location of Jhaveri Contemporary in Colaba, Mumbai. They wanted a space that would have a warehouse feel to it. After an on-and-off search for two years, they zeroed in on an apartment in Devidas Mansion. It took about six months of work to convert the derelict space into one worthy of housing fine works of art; Image: Mexy Xavier
The view is probably reason enough for opening an art gallery on the third floor of Devidas Mansion, on Mereweather Road in Colaba: Its wooden, arched windows frame two of Mumbai’s iconic structures—the Gateway of India and the Taj Mahal Palace hotel—along with a breathtaking view of the Arabian Sea.

Devidas Mansion, built in 1889, itself presented reasons good enough for sisters Amrita and Priya Jhaveri to move their eight-year-old gallery, Jhaveri Contemporary, from its earlier location in Walkeshwar to its new bustling neighbourhood. “The earlier space was in a residential neighbourhood,” says Amrita, “where nothing much really happened. Visitors to the gallery did not have any other attractions in the neighbourhood.” There was also real estate redevelopment looming large.

But looking for an alternative location was not an easy task. “We wanted a space that would have a warehouse feel to it—with high ceilings—but shouldn’t ideally have a corporate feel to it,” says Amrita. “And since our earlier space was like a cube, we did not want to repeat that look,” says Priya.

After being on the lookout, on and off, for about two years, an abandoned apartment in Devidas Mansion presented itself. Located on what is now officially called BK Boman Behram Marg, it stands in the midst of a mix of commercial activity aimed at tourists and locals alike. There are curio shops, bars, cheap hotels, art galleries, and an assortment of offices, some glittering and others about to crumble.

In the first few decades of the 20th century, the Mansion was called Thoburn House, after Bishop James Mills Thoburn, the first American Methodist to arrive in the country in 1859, and was a hub of missionary activity. The building was surrounded by a large lawn, and was quiet enough to have the hymns of the nearby Bowen Methodist Church to be heard during its Sunday services.

Although the rest of the building—housing several commercial enterprises and private residences, all presenting a vibrant, cosmopolitan occupancy—continued to thrive, this apartment fell by the wayside. “This place had been abandoned for the past 15 years or so,” says Priya. “It was absolutely barren. There weren’t even window panes or frames, and it was open to the elements.” There was no electricity or plumbing either.

It took about six months of work to convert the derelict space into one worthy of housing fine works of art. “Instead of working against what was already there,” says Priya, “we worked with it. We did not change anything, and whatever we added was keeping in mind its heritage.” This explains the attention given to detail, such as the wooden frames added to the windows, and the brass door handles that are reminiscent of vintage designs. Or the iron beams left in their places in the ceiling high up. “We even left the walls unpainted,” says Priya. “It is not a very big space—just 1,500 square feet—but the walls and ceilings, and the view from the windows, give it a much more spacious appearance. And unlike in our previous space, the walls here punctuate the viewing experience for our visitors.”

Relocating to Devidas Mansion also brings Jhaveri Contemporary to one of the art hubs in the city. “There is one hub in Worli, with Saffronart, Nehru Art Centre and Tao Art Gallery being located there, and there’s another one here,” says Amrita. The Colaba neighbourhood is home to galleries such as Chatterjee & Lal, Galerie Mirchandani + Steinruecke, and The Viewing Room, while also hosting the offices of international auction houses Christie’s and Sotheby’s.

The Jhaveris inaugurated their new gallery space with an exhibition, starting September 1, of works by 21 artists from South Asia, called What’s Essential, and includes works as diverse as Mrinalini Mukherjee’s bronze sculptures, Monika Correa’s hand-woven tapestry, Lubna Chowdhary’s ceramics, Raghubir Singh’s photographs and Nalini Malani’s digital animation. “The works in this exhibition speak to the gallery’s re-location, by invoking the textures, tonalities, and motifs that give the gallery’s new space—at the fringes of land and sea—both roots and anchors,” writes Diva Gujral, in her accompanying note on the exhibition. “All these artists are those with whom we have worked before, and with whom we would want to continue our relationship,” adds Amrita.

“This building is like an old lady with wrinkles,” says Priya. “And we want to keep her that way.”

Old buildings should not be a novelty in an old city. Especially in a city as old as Kolkata, which has imbibed English, French, Dutch, Danish, Armenian and Portuguese influences into its architecture. In the decades after the capital of the colonial government moved from Calcutta to Delhi (in 1911), the city continued to evolve with its creative and inventive architecture, up till around the 1960s. 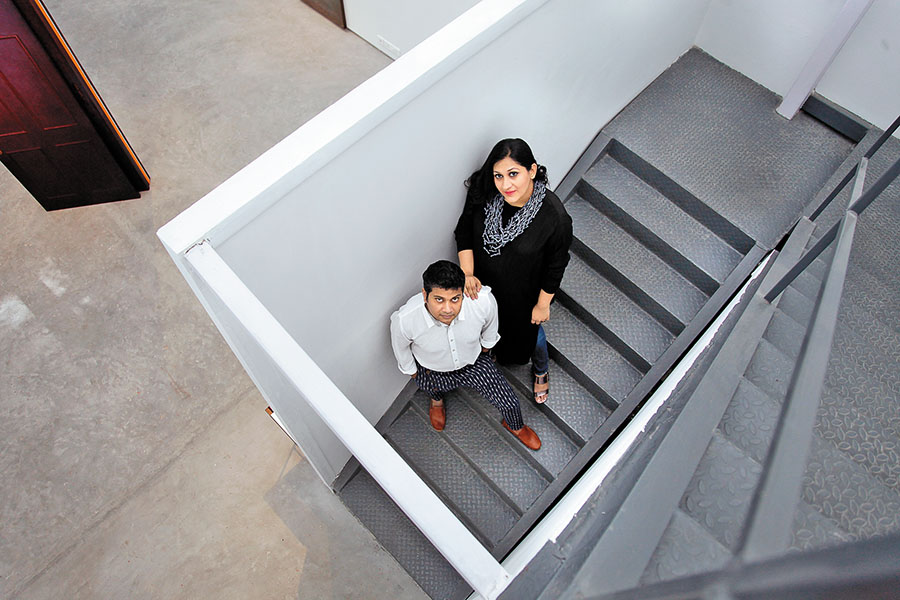 Priyanka and Prateek Raja, co-founders of Experimenter art gallery, located in a near-100-year-old house in Kolkata; Image: Subrata Biswas for Forbes India
And yet, old buildings are the most endangered of architectural species in an old city, with few managing to fend off the destruction wrought by real estate developers. One such building that escaped the builders is tucked into a quiet residential neighbourhood in South Kolkata’s Ballygunge neighbourhood, and caught the eye and imagination of Priyanka and Prateek Raja, co-founders of Experimenter art gallery. “I think Prateek must have seen every 100-year-old building in South Kolkata over the few years in which we were looking for a new space,” laughs Priyanka, as Prateek adds, “The space had to have character; it could not be just a white cube.”

And character they found at 45 Ballygunge Place. Located over two floors of a near-100-year-old residential house, it is a far cry from the conventional cube-like structure of art galleries. “A portion of the gallery has a new structure, which is an 8-metre high sky-lit contemporary architectural element that juxtaposes itself with the older part of the building, which has rare mosaic flooring, a gorgeous staircase, tree-lined balconies and French louvered windows in pentagonal rooms,” says Prateek. “We also have an entire open terrace for our outdoor programmes, film screenings and performances.” The Rajas, having started Experimenter in 2009, inaugurated their second gallery space, Experimenter Ballygunge, this February.

“We had started thinking of a larger space because of a physical requirement, along with the future of Experimenter. We have never seen ourselves as a standard model for a gallery; we challenge the concepts of what a gallery means in the Indian space,” says Priyanka. “We wanted an active space for engagement.”

The two floors of the building that now houses Experimenter Ballygunge were very well maintained, although the family—“a very erudite one”, says Prateek—living in the house had barely used the space over the past two decades. It is home to Aveek Sen, writer, thinker and essayist, who was born, and continues to live, in the house.

The new gallery space is located in a neighbourhood that is witnessing a drastic change in its skyline, and a demolition of its architectural heritage, especially of houses built in the late 19th century and the first half of the 20th century. Prateek is a member of Calcutta Architectural Legacies (CAL), a citizen’s initiative spearheaded by author and musician Amit Chaudhuri, with the aim of preventing the destruction the city’s distinctive architectural heritage.

Prateek says what plagues heritage buildings the most in Kolkata is an economic model that can sustain their existence. “It’s not like all owners want to redevelop them into generic buildings. In fact most owners have innumerable memories, a certain sense of pride, and they understand that once it’s gone, a small part of the city’s or their precinct’s fabric changes forever,” he says. “The new gallery is able to portray an alternative life for the building and is a perfect example of how the existing architectural elements of an old building can be used to benefit the art it shows.”

Although the Rajas have made alterations to the space, they have retained its character. The mosaic floors have been left untouched, and the walls have been spared the hammering, thanks to a shell that has been created within the original framework. The space was redesigned by architect Rajeev Agarwal, and lighting design team Lyle Lopez. “We have used material and lighting that are used in the leading museums of the world,” says Priyanka.

Experimenter’s new space has hosted three exhibitions so far. While its two spaces will have independent programmes, the Rajas are planning to have the same show running simultaneously at both places. “We have seen that visitors in Kolkata are willing to move from one gallery space to another, especially because they are just five minutes apart,” says Priyanka.

As part of the Experimenter Learning Program—which enables dialogue, discussion and debate in the fields of contemporary and performing arts, curatorship, film, writing, language and social culture—the Rajas have designed a classroom-like format for the new gallery, and have invited about 20 practitioners from varying fields so far. The groups, of 15 to 20, include a diverse range of attendees, including students, homemakers, filmmakers, writers and artists. “Most people in Kolkata do not have access to this kind of thinking,” says Priyanka. “We are trying to get here the foremost thinking process in every field. What is the ‘now’?”

Contemplations on the ‘now’ are perhaps only made more pertinent when housed amid walls that have witnessed a past that no one else has.