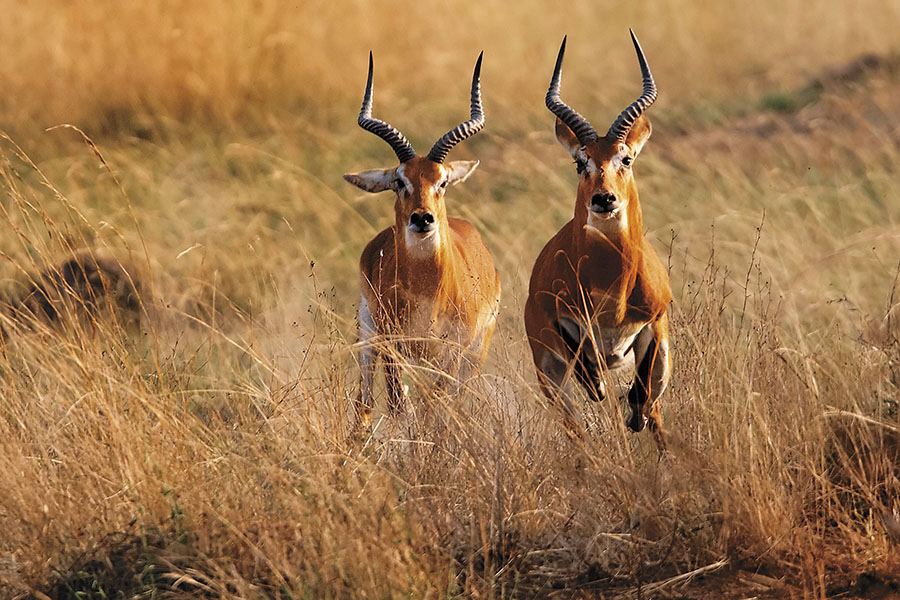 Other than for its gorillas, Uganda rarely finds a mention among favoured African wildlife destinations. The country is still associated with its infamous dictator Idi Amin, who left the nation bankrupt and allowed the destruction of its national parks. But Uganda has made a remarkable recovery and today is one of the best wildlife destinations on the continent, as we find out.

With our driver and guide Martin Okot, we undertake a month-long circuit of the country: From Entebbe, we travel north-east to Jinja, then north to Masindi and Murchison Falls, before turning south along the Rift Valley, returning to our starting point via Lake Mburo.

Mammal Fix
Uganda is different from eastern and southern Africa because it lacks the high concentration of wildlife, with the exception of the Queen Elizabeth (QE) National Park. Situated in the scenic Albertine Rift, bordering lakes Edward and George, fringed by the Rwenzori Mountains that rise more than 5000 m, the 2,000 sq km park has 95 species of mammals, including 25 predators.

On drives through the park, we spot a wide variety of herbivores, such as waterbuck, topi, and buffalo. Uganda’s national animal, the kob, a handsome medium-sized antelope, is abundant. Hippos wallow in and around the many waterways while baboons, one of the 10 primates found here, are easily seen, as are warthogs. We also come across a group of giant forest hogs, the largest wild pig native to wooded habitats in Africa. Our lodge even has a large band of habituated banded mongooses, who patrol their territories and inspect guests with obvious curiosity.

There are now over 1,000 elephants in QE, a significant recovery from the low of around 150 due to poaching during and immediately after the Idi Amin era, though the number is still below the 4,000 mark from the early 1970s. The tragic past is evident in the behaviour of some older elephants who are nervous and sometime aggressive around humans.

Lion numbers, too, have recovered in QE. The most famous are the tree-climbing lions in the southern Ishasha sector, who rest on the limbs of trees during the hottest part of the day. We come close to the Kasenyi pride, in the northeastern sector of QE—with 16 lions, including several cubs—although they are hidden in distant scrubs. However, we see several of the tree-climbing variety in the beautiful and wilder Ishasha area.

Martin is keen to find the spotted hyenas in the southern part of QE. Within a short distance of our lodge, we come upon them at a kill of a kob on an early morning drive. We park the car only metres away, and spend several hours watching the clan in action.

The kill we came across had taken place only minutes before our arrival: The three adults at the carcass are still panting from the exertion, their muzzles dripping with fresh blood. They quickly dismember the dead kob. The clan hierarchy is evident: Lower-ranked animals, sub-adults and the young wait a short distance away until they are called.

More than 60 vultures—hooded, white-backed, Rüppell’s griffon and lappet-faced—descend, and await their turn. But, in a little more than an hour, the only evidence of the dead kob is the skin. Well before the end, the disgusted vultures depart.

Martin says he has only seen this once before. We have been extremely fortunate.

There are more than 1,050 recorded species, representing 60 percent of the bird species found in Africa, and 11 percent of the whole world. With the help of Martin and local guides, we are lucky enough to see around 450 species.

At the Mamba Swamp, west of Entebbe, after a short boat trip, our guide points out a Shoebill Stork, one of the holy grails of African birds. Shoebills, also known as whalehead storks, are very large birds standing up to 1.5 metres high with a wingspan of up to 2.5 metres. The bird stands still beside a channel, waiting for its preferred prey—lungfish. When it spots one, it pounces. The razor-sharp edges of its mandibles and a large hook at the tip of its massive bill help it decapitate its prey. Due to the destruction of its favoured papyrus swamps and due to hunting, shoebills are now classed as vulnerable.

More Avian Riches
There are numerous types of weaver birds throughout Uganda, with their elaborately woven communal nests. There are warblers, thrushes, flycatchers, sparrows, woodpeckers and barbets. Perhaps the most striking are the crested barbets, their faces speckled yellow and red, with a small black crest, a yellow belly with red dots, black wings with white specks and a broad black band on its neck. Despite the bright colours, the bird blends into the bush.

There are mousebirds, the survivors of a lineage that dates back to the late Palaeogene and Miocene periods. The tiny and slender grey or brown birds have soft, hairlike body feathers. They scurry through trees in search of berries, fruit and buds, sometimes feeding upside down.

We see kingfishers, ranging from the tiny (12 cm) African dwarf kingfisher to the large (40 cm) giant kingfisher. At the edge of a lake, we see an appropriately named Shiny Blue Kingfisher in the air, its wings brilliantly iridescent in the sunshine. There are multiple species of bee-eaters, with richly coloured plumage and elongated central tail feathers. There are turacos (literally ‘banana-eaters’), with their prominent crests and long tails, and massive hornbills. A pair of striking Abyssinian Ground Hornbills saunter on the side of the road. We watch beautiful grey crowned cranes, Uganda’s national bird, perform their courting dance.

A fruiting tree yields a flock of African grey parrots. Their intelligence and talking ability have made them prized pets, with over 3.5 lakh birds being traded on the global market between 1994 and 2003. They are now classified as endangered.

(From left) A crested barbet and a grey crowned crane
Images: Peter Betts / Shutterstock.com; AWEI / Shutterstock.com
Birds of Prey
Birds of prey are everywhere. We find a hobby—a small, slim falcon—near one of the President’s residences, near the town of Jinja. Our binoculars attract the attention of armed soldiers who tell us to move on. There are eagles, including long-crested eagles with their punk hair-dos, and buzzards and goshawks. We get excellent views of several martial eagles, the largest of the African eagles, with a wingspan of nearly 2 metres. They hunt large birds and small antelope. We hear but are too late to see a crowned eagle, the most powerful raptor in Africa. There are monkey bones from recent kills near its nest site, a testimony to its strength.

At Murchison Falls National Park, we stake out the cliffs, hoping to spot a bat hawk, a specialised raptor that preys on bats. While we are waiting, an African harrier hawk appears, searching the rock crevices for bats and flying off with prey.

Nocturnal birds are present even during the day. We see several Verreaux eagle owls, their eyelids pink. On a boat trip, the boatman surprises a pair of roosting Pel’s fishing owls. At night, we see the pennant-winged nightjar; during breeding season, the male acquires pennant feathers up to twice its body length.

Uganda birding is sometimes ridiculously easy. A beautiful Ross’s turaco turns up in our Entebbe lodge’s bird bath; a flock of white helmetshrikes flies across the road, close to our car. But some birds are more difficult to spot. It takes us three weeks to get a decent view of two black-billed turacos. Although we have heard their calls, their bright green feathers camouflage them in the forest. We hear a chocolate-backed kingfisher call, but a two-hour search does not provide a sighting. 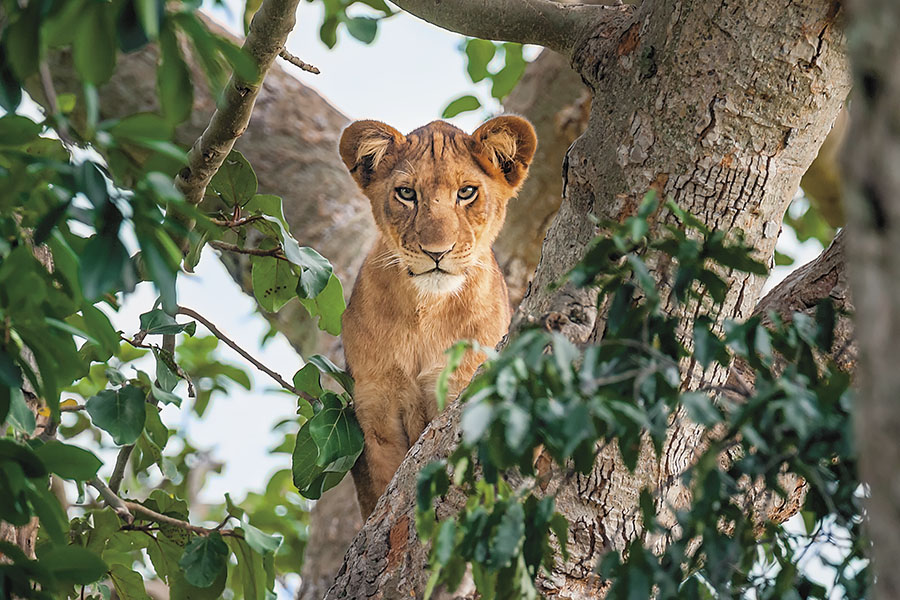 For How Long?
The remaining forests, such as in Kibale, yield rare treats. There, in pitch darkness, we set off in search of the green-breasted pitta. About an hour later, we spot the bird on the path, rummaging for insects. Even in the dull light, it is spectacular.

The array of wildlife may suggest an idyllic wilderness. But that would be misleading. These forests are isolated patches in a sea of humanity. Much of our birding is done from busy roads, and in and around villages. We spot the elusive papyrus gonolek, a stunning crimson bird with a bright yellow cap, in a tiny patch of swamp. The nearby village has created a small reserve to earn tourist dollars.

Near the Bwindi Impenetrable National Park, in south-western Uganda, we are on the lookout for wrynecks, a small woodpecker, only to find that a small copse where they were often seen has been cut down. We try an alternative spot, which turns out to be a single tree standing amidst farmland. The guide has seen a single bird here occasionally.

Uganda’s population growth is around 3.25 percent, among the highest in the world. The needs of a poor rural population to look for agricultural land is rapidly destroying forests and wild places. Uganda may be Africa’s overlooked jewel, but it is unlikely that future generations will get the chance to see its wonders.

Tweets by @forbesindia
Bankruptcy framework 2017 - a much needed relief for the Indian financial sector
Zorawar Kalra: The culinary maestro