In the last two decades, Bhagwati Group scaled from Rs 42 crore to Rs 1,100 crore in revenue, thanks to their brands Gaay Chhap Besan and Uttam. Now the Patels betting big on export brands Kemchho and Uphaar 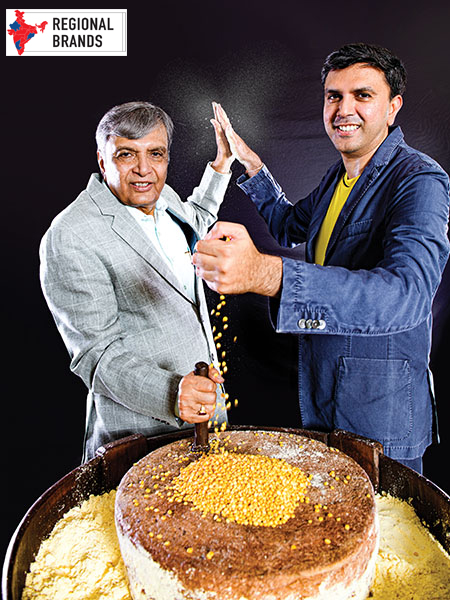 Ahmedabad, Gujarat, 2021. Vashist Nitin Patel was gingerly in his approach. The third-generation entrepreneur—he joined the family business of flour and spices in 2001, beefed up the Gaay Chhap and Uttam brands, and scaled it from ₹42 crore to ₹1,100 crore in revenue in two decades—was on a routine market visit last January. Apart from gauging the pulse of the market and feedback of consumers, Patel wanted to share a technical update with his sea of retailers. “They are family members and we share everything with them,” says the director of Shree Bhagwati Flour & Foods, which started with Gaay Chhap besan (gram flour) in 1962.

Meanwhile, at the bustling spices market in Ahmedabad last year, Patel started to talk about the updates regarding the manufacturing of spices at their Bhayala unit. With cryogenic technology, he slowly explained to retailers, spices and herbs are ground at a sub-zero temperature. “It means from 0 degree to minus 196 degrees,” he underlined, adding that the process uses liquid nitrogen and carbon dioxide. This prevents the temperature from rising during the grinding process. The technical description, though, did little to spice up the bland expression of the audience.

Patel continued. Cooling with cryogenic gases keeps the product free-flowing, and the aroma and taste intact. Now the brooding faces brightened up. The technology, the shopkeepers thought, might hit the aroma and taste of the spices. Gaay Chaap and Uttam, he underlined, will never compromise on quality. “I allayed their apprehension,” he says. Back in 2001, spices contributed just 2 percent to revenues. “Now they make up 10 percent,” he underlines, adding that the group has four state-of-the-art manufacturing units in Gujarat which roll out over 700 SKUs. 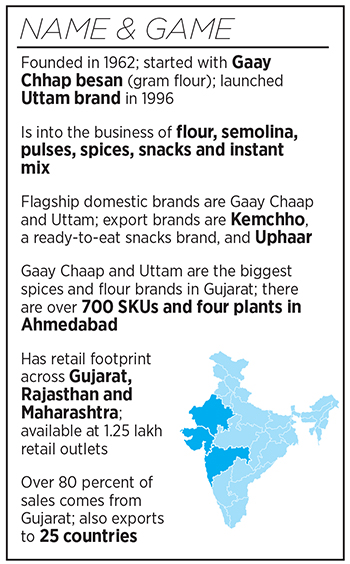 In two decades, Patel has spiced up the business, which was largely known for Gaay Chhap besan. Now the group is into flours, semolina, pulses, spices, snacks and instant mixes; has Gaay Chhap and Uttam as flagship domestic brands which also happen to be the biggest in Gujarat; and has rolled out Kemchho and Uphaar brands catering to the export markets. From a nil contribution in 2001, 20 percent of revenue now comes from exports to over 25 countries.

Back home, Patel has expanded the group’s footprint to Rajasthan and Maharashtra. While 43 percent of sales comes from Gujarat, Rajasthan and Maharashtra chip in with 23 percent and 20 percent, respectively. “We are now getting into papad, dips and sauces,” says Patel, claiming that the group closed FY22 with an operating revenue of ₹1,225.41 crore.

The journey, though, was not easy, especially once it crossed the halfway mark. In 2001, the Gaay Chhap maker had to take the bull by the horns. “It all had to do with the name of the brand,” recounts Patel, alluding to the challenges that a quirky label like Gaay Chhap posed once the brand started to diversify from gram flour and moved into other states. While expanding the brand in Gujarat, which was used to names like Wagh Bakri, the Patels faced negligible resistance. But once the ‘cow brand’ stepped out of Gujarat, there was little pasture. The Patels decided to fix the issue and rolled out Uttam in 1996. The idea was to take the new brand outside the home territory, roll out more products such as spices, pulses, instant mixes and value-added flours, and cater to a wider set of consumers.

Two decades later, the gambit seems to be paying off. “Uttam has become bigger than Gaay Chhap,” contends Patel. What has helped the brand grow is a set of overlapping factors. First is the low level of branded play in multiple segments. Take, for instance, value-added flour. While the organised penetration of salt in India stands as high as 88 percent, value-added flour is less than 5 percent. If tea and snacks are at 65 percent and 50 percent, respectively, branded spices have a penetration of just 40 percent. Now compare this to wheat flour (10 percent) and pulses (1 percent) and you get the picture of why the Patels are bullish on the categories they are present in. “Over 80 percent of our revenue comes through the sale of branded products,” he says.

Also read: Goldiee Masale: Getting into the grind 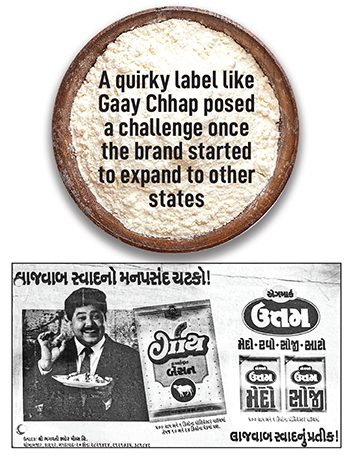 Making a brand out of a commodity was a grinding task. “People might think it’s a run-of-the-mill job. But it wasn’t,” says Patel. Bringing about a change in consumer behaviour, especially in a state like Gujarat where for decades families preferred to either mill at home or opted to buy loose from trusted kiranas, had its fair share of challenges. A sharp focus on quality helped. By rolling out products with a low shelf life as compared to the rivals gave a big push to the brand. Automation too came in handy. “We achieved a very high degree of automation even in the ethnic snacks category,” claims Patel.

Another big plus was a massive push in expanding the retail footprint. Out of over 1.25 lakh retail outlets where the products are available, 43 percent are in Gujarat. And the expansion has happened largely over the last decade. Look at the revenue numbers which reflect the pace at which the retail footprint expanded: From ₹482.95 crore in FY15, the sales leapfrogged to ₹1,225.41 crore in FY22. “We were also bullish in having a sizeable presence in all modern retail outlets,” says Patel, who is quick to add that the widening of the product basket too helped the group in beefing up its revenues.

Also read:  Prataap Snacks, to Delhi and beyond: Catapulting to a Rs 1,000-crore brand 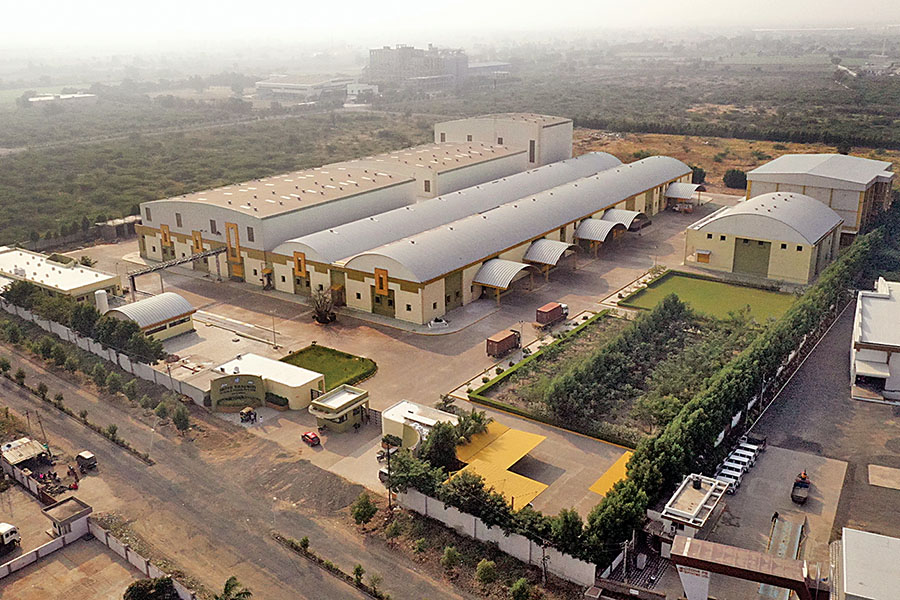 Automation is key at all the Shree Bhagwati Flour & Foods plants, including at the Bhayla plant (above). The group’s manufacturing units in Gujarat roll out over 700 SKUs and have a daily production capacity of 550 metric tons of flour, and 20 metric tons of spices and whole spices

Yet another sales’ tailwind, which largely remained under the radar, was exports. In 2001, when Patel joined the business, there was no concept of exports. Though the young entrepreneur incurred a heavy loss in the first year, his father encouraged him to continue with his bold bets. Two decades later, exports form 20 percent of the revenue. “My father taught me the power of persistence,” he says, claiming that ready-to-eat snacks brand Kemchho and grocery brand Uphaar have picked up well in the American and European markets. Though the journey, he lets on, has been challenging, sticking to the core values of quality, hard work and humility helped in overcoming the odds. 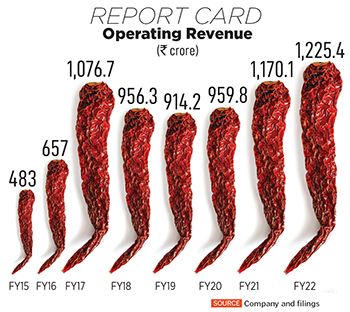 For the Patels, the next leg of the journey, though, might pose a new set of challenges. The group, explain brand and marketing experts, has to bring a sharp focus on the product portfolio of the brands. “There is an overlap in products offered by Gaay and Uttam,” says Rajan Gahlot, assistant professor at Delhi School of Economics. Even if the target segments of both the brands might be different, they would end in brand cannibalisation. The second challenge, he points out, is a geographical concentration of revenue. Though it’s great to be a strong regional brand, one needs to hedge one’s bets.

The third pain point could be the threat from nimble and aggressive unorganised players. The group, Gahlot maintains, faces intense competition from established and smaller players in the agro-processing industry, which restricts pricing flexibility. “It also exerts pressure on margins,” he adds.

Patel, for his part, is aware of the potential speed-breakers. What, though, gives him hope is an unflinching faith in the brand equity of Gaay Chhap and Uttam. What also helps, he points out, is not spreading the company too thin in terms of presence. The headroom for growth in the domestic market—Rajasthan, Maharashtra, and not to forget Gujarat—as well as globally is massive. “We just need to grind along and stay patient,” he signs off.

Tweets by @forbesindia
How to make agility your company's superpower
5 things you should know about Porsche, luxury carmaker with storied history