Kerala-based VKC Group took some bold bets to become one of the largest homegrown footwear manufacturers. It is now banking on overseas tie-ups to leave a global footprint 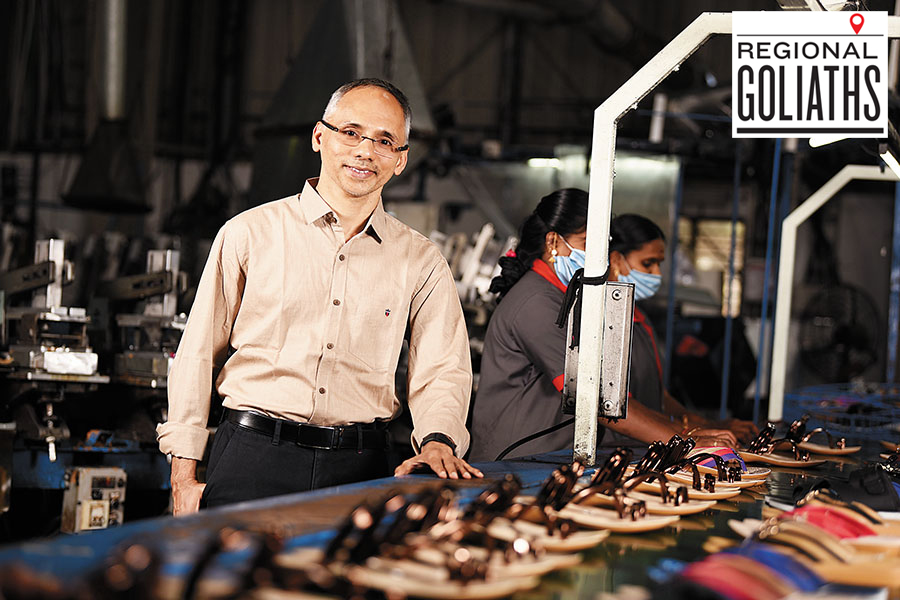 VKC Noushad hopes to sponsor the Indian cricket team one day. If Nike could, Noushad certainly sees no reason to think otherwise. The 50-year-old is the managing director of the VKC Group, a Kerala-based footwear maker—among one of the largest homegrown manufacturers. “We are targeting the masses,” Noushad tells Forbes India over a Zoom call from Coimbatore. “We will definitely be looking to sponsor the Indian team one day, but as a common man’s brand.”

The group, founded by Noushad’s politician father VKC Mammed Koya, runs a business that comprises over 20 manufacturing units spread across eight states. It operates 14 brands, and counts Bollywood superstars, including Aamir Khan and Ajay Devgn, as brand ambassadors. From a paltry revenue of ₹50 crore in 2005, the group boasts revenues of over ₹2,100 crore annually today.

The VKC Group comprises three entities—the umbrella brand that traces its root back to 1984, and two divisions run by Noushad and his brother VKC Abdul Razak. While the siblings take care of the company’s flagship products—VKC Pride, VKC Lite and VKC Stile—jointly, they have also clearly demarcated their business. Division one is run by Noushad and comprises the Walkaroo brand that contributes 50 percent to the group’s turnover. Razak runs division two that comprises brands such as Blue Tyga and Vestire.

Almost all the brands are focussed on footwear, and businesses are now being diversified into apparel and school bags, among others. “We are focussed on the democratisation of fashion,” says Noushad. “The Indian customer is demanding the latest products and fashion compared to earlier times. We want to cater to that… the opportunity is massive. If we don’t do that, the market will be taken over by multinationals and Chinese products.”

India’s footwear industry is highly unorganised with nearly 15,000 micro and small industries, according to the Council for Footwear, Leather & Accessories (CFLA), an industry body set up under the aegis of the commerce ministry. India is the second-largest producer of footwear in the world, accounting for 13 percent of the global footwear production, after China (about 67 percent).

“Whenever we fail to bring an element of technology or fashion into our business, or if we miss key trends… import happens very fast,” says Noushad, who is also vice president of the Confederation of Indian Footwear Industries. “As an association, we are trying to bring new technologies to India to ensure that we all grow together.” 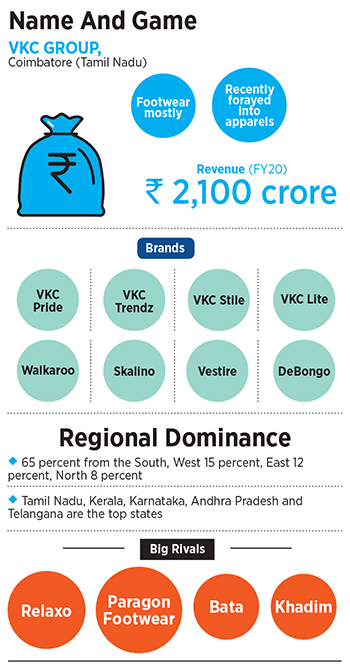 Wood to Footwear
The VKC Group started as a wood and timber business entity in Kerala in the late 1960s.

With his two friends, VKC Mammed Koya started a company that supplied raw materials to matchstick industries. Taking the initials from their surnames, the company was named VKC. Koya is currently a legislator in Kerala and was the former mayor of Kozhikode.

The company started with manufacturing matchsticks and though business flourished for a decade, it had to deal with stiff competition thereafter. “Initially, there were only two industries in our area,” says Noushad. “By 1984, there were 162 units, and we realised we would have to shut it down because it wasn’t going to be sustainable.”

Around the same time, Kerala began to see a huge demand for ‘Hawai’ chappals. That prompted Koya to venture into the footwear market by manufacturing ‘Hawai’ chappals since the Southern state had a robust rubber industry. The company set up one unit near Kozhikode to cater to the North Kerala market and Koya went to the Rubber Research Institute of India in Kottayam to understand the business. He also took up numerous trials at the institute to build the right quality of rubber sheets to manufacture the chappals.

“There were a few pain points that my father wanted to solve,” recalls Noushad. “While slippers were being used for daily use, there were also labourers working in construction or farming. They needed something sturdy and we offered that along with unique colours and packing. From then on, there was natural growth and acceptance in North Kerala.” The company started producing about 600 pairs of chappals a day.

Back then, labourers in Kerala came from adjoining states, including Tamil Nadu and Karnataka, and many were instrumental in introducing the product to other states. Around the same time, Koya began educating his children about the footwear industry. Noushad studied chemical engineering at the Thrissur Engineering College before going on to do his master’s in polymer technology. It was a time when the industry began to see excess capacity as manufacturers ramped up production. Noushad, meanwhile, underwent training at the Rubber Research Institute, and spent time in New Delhi and Batanagar, West Bengal, to understand the business.

By 1994, Noushad decided to focus on virgin quality polyvinyl (PV) footwear in Kerala, which had begun to replace rubber slippers. “I was quite fascinated by the business, and even enrolled for a PhD at IIT-Madras, before quitting to focus on the business,” he says. Technology, however, was fast-evolving and, by 1998, Noushad began focusing on microcellular polymer footwear with Taiwanese machinery to stay ahead of the market.

“We were still a small business with an SME mindset, with 50 people,” says Noushad. “We were afraid to deal with complexities. We started small units for every technology.” By 2000, air-injected PV with synthetic leather had caught on, and the company set up two additional units. “We were only in Kerala… but we had different brands based on different technology,” explains Noushad. The group had a revenue of ₹20 crore by the end of the millennium.

The Big growth
By 2003, the company started an EVA (ethylene-vinyl acetate)-injected unit, a technology for soles that makes them soft, flexible and weather-proof. “That was a turning point in our business,” says Noushad. Around the same time, he had visited Coimbatore in pursuit of expanding the family business that had largely remained within Kerala. The company started with one unit. “Initially it was extremely tough. In Kerala, we had good distributors. But in Tamil Nadu, dealers were keen on more margins and higher credit. They would take our products and didn’t sell them. We were in trouble,” he adds.

By then, the company had a turnover of ₹50 crore in Kerala. “My thinking was that if we didn’t succeed in Coimbatore, we will go back to Kerala,” says Noushad. “We got a few dealers, but they were not showing our products to retailers.” Taking things into their own hands, Noushad and team travelled across Tamil Nadu—with a map they had purchased for ₹10—convincing retailers with their catalogues. “We found some retailers who were willing to sell,” he says.

In 2008, the company approached a management consultant to restructure the business, especially since there were numerous small units under it. The group’s turnover stood around ₹70 crore, and with some nudge from the consultant, VKC decided to bet heavily on its business. “Initially we thought we would grow to some ₹250 crore in five years,” Noushad says. “But the consultant had a lot of questions for us and told us to be ambitious.” Soon enough, the company decided to set up a manufacturing facility in Karnataka, importing machinery from Europe, and by 2014, the group’s revenues grew to ₹800 crore. Today, nearly 70 percent of the company’s revenues come from the southern states.

“We started new units and expanded our existing units,” says Noushad. “By 2013, we began focusing on the pan-India market.” By then the group also consolidated nine brands into three to improve visibility. In 2013, the company started Walkaroo, a brand with a focus on the youth with cricketer Rohit Sharma as brand ambassador. Today, Aamir Khan is its brand ambassador.

“Footwear as a product is built on trust,” says N Chandramouli, chief executive officer of TRA Research, a Mumbai-based marketing and branding agency. “VKC has been a dominant player in the South and has been successful in expanding its business into newer segments and categories. Even in the southern market, it went to each of the states, and was able to build a distinct identity. Now as it looks to expand pan-India, it will have to be cautious and look towards building that trust.”

Walkaroo and Beyond
While Noushad looks after the Walkaroo brand, Razak handles an arm that manufactures footwear, apparel and school bags. These include brands such as DeBongo, Strabo Bags and Blue Tyga. “When the number of units increased, we decided to look after a few brands between us,” Noushad says.

Division one contributes about ₹1,500 crore to the group’s revenue while the rest comes from division two. Of this, Noushad reckons that almost ₹1,200 crore comes from Walkaroo. The company has also set up a manufacturing plant in Bangladesh. “We are joining hands with European design houses and some design centres in China as well,” says Noushad.

The group currently has a production capacity of 5.5 lakh pairs of footwear a day, with division one’s capacity at 4 lakh pairs daily and division two at 1.5 lakh pairs.

The Indian footwear industry is estimated to be between ₹40,000 crore and ₹80,000 crore, of which the branded non-leather market is about ₹18,000 crore. India is the second-largest producer of footwear globally, producing 220 crore units annually, behind China which manufactures 1,420 crore units a year. Despite this, the per capita footwear consumption in India is very low at 1.7 pairs, compared to six in developed nations, according to CFLA. “VKC has been able to build up a huge distribution network, and has been targeting the mass market with much success,” says Ankur Bisen, senior vice president at consultancy firm Technopak Advisors. “Its products cater well for the price-sensitive market, and it has been successful in building functional products.”

Noushad, meanwhile, reckons other countries, including Thailand and Vietnam, have begun to give India serious competition in footwear manufacturing. “We need to improve team work and the industry should move together,” he says. The company—with around 550 distributors and 1.5 lakh retailers across India—is currently in the midst of ramping up its online sales. For now, Noushad feels the group is rather profitable, and isn’t in a rush to attract private equity funding. “We want to move faster into newer categories and segments,” says Noushad. “We have to remain up-to-date to stay on top of the market.”

Perhaps, it’s this obsession that will help VKC to sponsor the Indian cricket team one day.

Tweets by @forbesindia
Photo of the Day: Fogging for safety
We want to mentor women and help them turn entrepreneurs: Ranveer Allahbadia