Four entrepreneurs prove it's never too late to start up

Taking the entrepreneurial plunge after doing corporate jobs for years isn't easy. But these four businesspersons have proved it's never too late to follow your heart 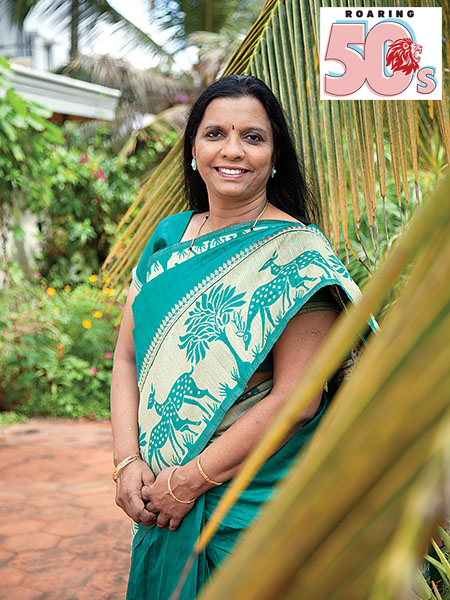 Eye For AI
Starting something new or pursuing a completely different path comes easily to Geetha Manjunath. After 17 years in the field of computer science, she decided to do a PhD in a completely new subject. “I am like that. I went back and picked up a completely new topic, which is artificial intelligence [AI] and data mining. I never knew it would be such a big thing now,” she had told Forbes India in an earlier interview.

It meant going back to class and studying with younger students. She became a senior manager with an MNC, where the team worked on emerging markets solutions, transportation and traffic management systems as well as with hospitals and health care, trying to do “meaningful innovation with business and social impact”. 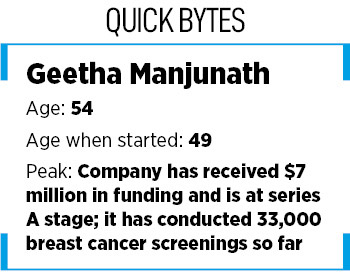 Niramai’s screening solution is portable, and has conducted 33,000 screenings. During the Covid-19 pandemic it offered Home Breast Health Screening for high-risk women or cancer survivors who needed monitoring. Last year it developed a FeverTest screening for identifying Covid-19 symptoms and got CDC UK funding for it.

“The main advantages of becoming an entrepreneur at this age are maturity in decision making, patience while dealing with your initial naysayers and resilience to come out strong after any critical setbacks,” she says.
● Monica Bathija 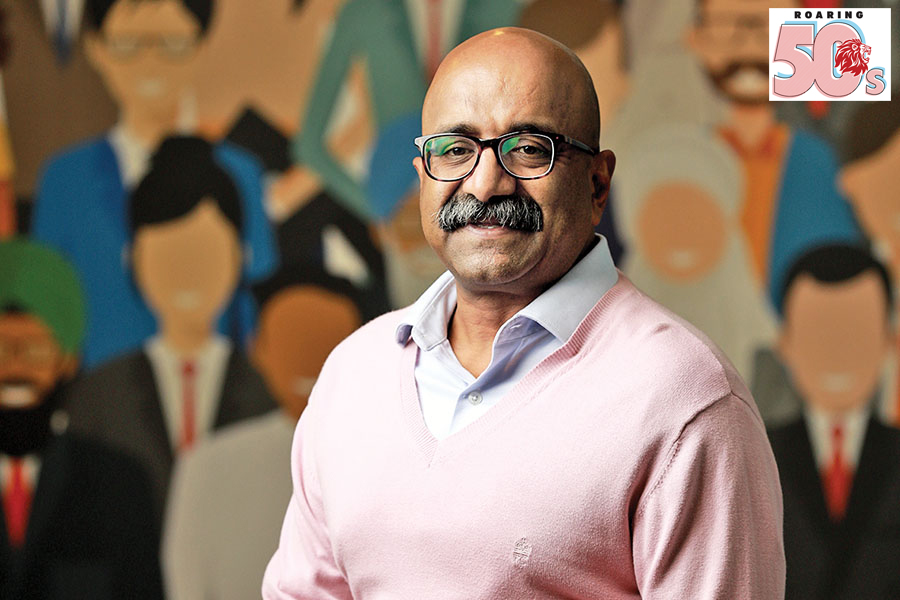 Mutual Benefit
Atul Shinghal is founder and CEO of Scripbox, a company that has played an important role in making it easy for people to invest in mutual funds in India. The venture’s investors include Accel and Omidyar Network. Shinghal is also co-founder of Probe Information Services, which provides financial information on Indian companies.

He went to the IIT-Madras, for a degree in naval architecture, but job avenues were limited in the specialised subject. With his love of maths and numbers, he turned to finance, after an MBA from IIM Bangalore.

The first product at Scripbox, which he co-founded with friends Sanjiv Singhal and WS Ravishankar, was just one basket of four funds for long-term investment. Today, not only does it have several plans and funds on its platform, but it is also evolving into a broader wealth management platform. 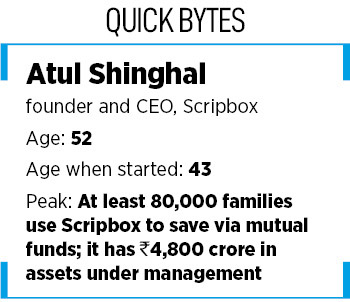 Users get to quickly select funds and investment plans through a mobile app or the website. Scripbox has helped 7,000 savers turn rupee millionaires, with an average growth of 7x, says Shinghal. “My mantra is ‘stay invested and keep investing’.”

The company has customers across India, with at least 80,000 families using Scripbox to save via mutual funds. Scripbox has about ₹4,800 crore in assets under management. “We’ve grown 4x in the last 18 months, just with our existing customers committing more money,” he says.

When he started Scripbox in 2012, Shinghal had a stellar career in finance, spanning India and South Africa. It was the global financial crisis of 2008 that got him to decide on a break—for almost a year, between 2009 and 2010—and he started Probe Information Services first in 2010 and later Scripbox in 2012.

Harking back to a conversation he’d heard between his parents, Shinghal was struck by the idea that most people invested without a clear purpose. He thought he could change that by bringing in the power of digital to offer clear, data-driven advice and transparency. Many in India trust that combination today.
● Harichandan Arakali 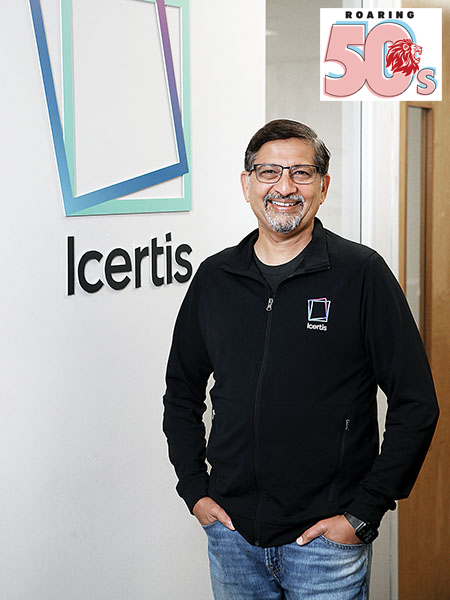 
Ensuring Contracts In The Cloud
Samir Bodas, co-founder and CEO of Icertis, is a technologist with about 35 years of experience in the software industry. He took his venture, in the specialised field of contract lifecycle management, from India to the US and turned it into a corporation that is valued at $2.8 billion. Among Icertis’ investors are Eight Roads Ventures, B Capital Group, Greycroft and PremjiInvest.

In the process, he has successfully straddled the world of entrepreneurship and the demands of corporate leadership. Bodas founded Icertis in 2009 with his friend and serial entrepreneur Monish Darda. Prior to that, he had held senior roles at Microsoft India and served as CEO at two IT services firms, Disha Technology and Aztecsoft, which had strong growth and successful exits on his watch.After Aztecsoft was acquired by Mindtree in 2008, and with Darda having sold his company at that time as well, they were at a bit of a loose end, Bodas recalls. And going back to a corporate job wasn’t appealing because, “they are excited about hiring an entrepreneur, but they put you on a leash”, he says. Since it was way too early to be relaxing, they decided to go into business together. 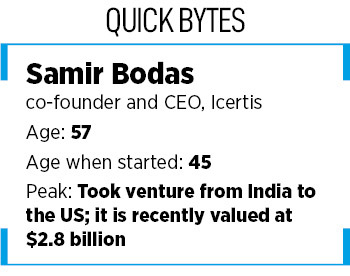 For a couple of years, it was all about consulting and working on basically only a hypothesis they had about what they wanted to do, to “ride a technology wave” in the enterprise space. Cloud computing was just beginning to catch on and that caught their attention as well.

And a chance conversation with a friend at Microsoft provided the seed of an idea that became Icertis. The Windows giant was interested in a good cloud-based solution for contract management, and if Bodas and Darda could build it, Microsoft could well become a customer. Today many of the world’s biggest companies use Icertis’ contact management solutions.

When not working at Icertis, Bodas is a self-confessed golf addict. He is also a member of The Indus Entrepreneurs in Seattle.
● Harichandan Arakali 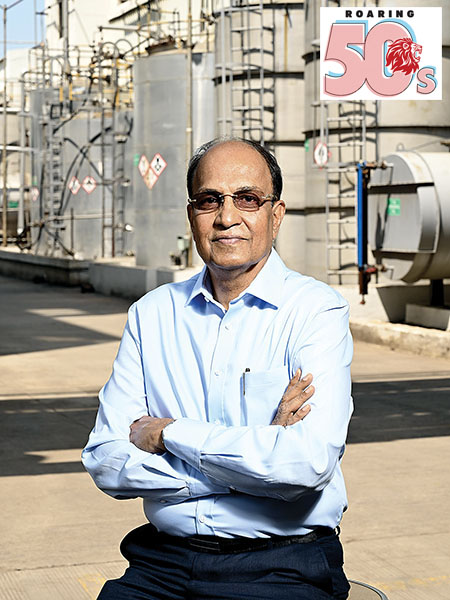 Clean Act
At 54, when Ashok Boob set off to start a new business, he didn’t venture too far from his core competency. At the same time, he was clear that his business of producing different chemicals had to be a lot cleaner. Nearly 15 years later, he’s created a potent combination at Clean Science and Technology that is valued at ₹22,600 crore ($3.01 billion).

With nephew Siddharth Sikchi, he set up a small lab in Vapi and the two decided to work on a different set of chemistries. Boob and Sikchi decided they would work on interesting catalytic and cleaner technologies that can be used to manufacture specialty chemicals.

The first products Clean Science commercialised were monomethyl ether of hydroquinone (MEHQ) and Guaiacol. MEHQ is used in diapers and sanitary pads while Guaiacol finds application as a pharma intermediate in cough syrup. 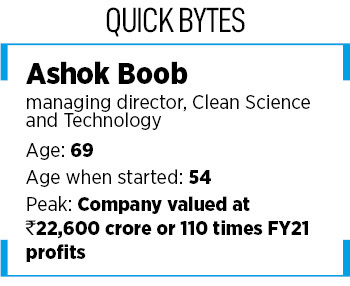 Clean Science now has seven products that are used in a wide variety of formulations, from an anti-oxidant in the food and animal feed industry to infant food formulations and breakfast cereals, and as a reagent in anti-retrovirals to UV blockers in sunscreens.

The market is valuing the business at ₹22,000 crore or at about 110 times FY21 profits. The stellar valuation is part a reflection of rapid growth, part high valuations for the industry and part the high margin profile of the company. While the IPO offer price in June was ₹900 a share, the public markets have since bid it up to upwards of ₹2,000 a share. Boob, who spent his entire career at Mangalam Drugs and Organics as a promoter director before turning entrepreneur, is not complaining but is cognisant of the fact that the business may be overvalued in the short term.