How to give in to your compulsive idea, Virendra Gupta style

After quitting the stability of corporate life, VerSe's founder dove in to create solutions to bridge the digital divide for rural India. The result is a $3 billion juggernaut 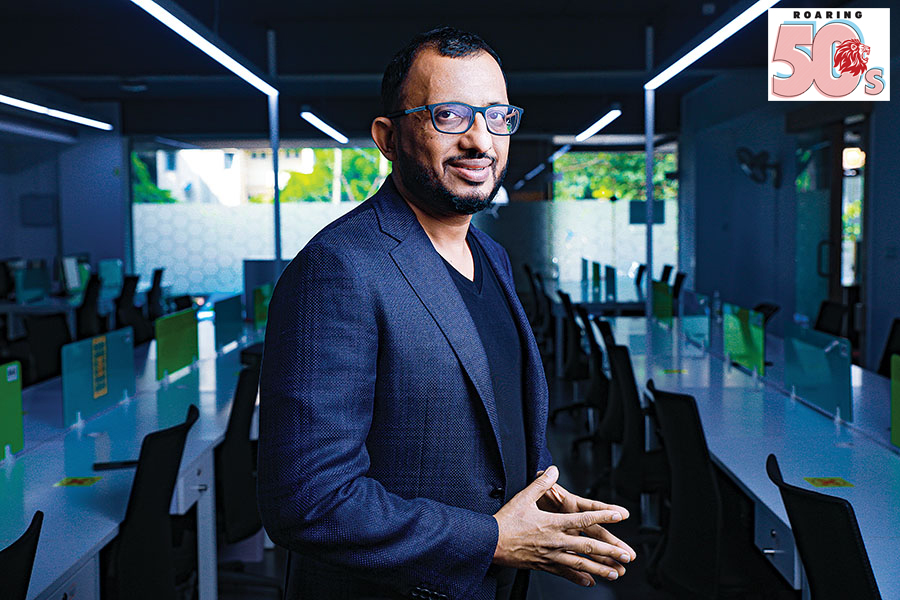 You never make a rational decision when you start. You have to take it to the level of irrationality: Virendra Gupta, founder, VerSe Innovation
Image: Selvaprakash Lakshmanan for Forbes India

Virendra Gupta apparently didn’t make a rational move in 2007. After all, engineers take into account critical data, and then decide. But Gupta was wired differently. He chose to ignore the statistics. In 2007, at age 36, he had a decade of experience in telecom companies—BPL Mobile, OnMobile, Bharti Cellular and Trilogy—and he suddenly found himself possessed with a compulsive idea of bridging the digital divide in Bharat (Tier III and beyond). “I was at a point where I couldn’t do anything else,” recalls Gupta, now 50. “I was not enjoying the corporate life.”

Though Gupta shunned the corporate world after a decade, he was getting into a life where there was no element of predictability in money, success and stability; the odds were heavily stacked against the man in his mid-30s who was pitting himself against the much younger ones in their 20s; people kept on throwing statistics at him. He was continuously told that 99 out of 100 startups fail.

Gupta turned a deaf ear to the naysayers. “You never make a rational move when you start,” he says. Looking at data meant not jumping over the fence. One needs to be possessed with an idea, take the decision to the level of irrationality and just jump. Gupta adds a caveat, though. “One needs to ensure that one is doing it for the right reasons,” he says.

Back in 2007, Gupta might have had the right reasons, but the move still looked irrational. He started VerSe Innovations (VerSe comes from vertical search) and offered information services over SMS and USSD (unstructured supplementary service data). OnMobile pumped in a seed capital of $1 million, which fuelled the passion of the rookie entrepreneur who decided to build solutions around information services which people can access over mobile. Gupta wanted to bring jobs, matrimony, property, news, and give all kinds of information over mobiles.

For five years, Gupta had a great run. He distributed services to the mobile operators in India, Bangladesh and countries across Africa. “It was a large scale and profitable business, and had billions of users,” he claims. What he noticed was a huge latent demand for local language content.

In 2011, Gupta changed gears, and made a pivot. He bought Newshunt, which was delivering local language news content on mobile, and moved from B2B to B2C business. To outsiders, the move again seemed irrational. Reason: Miniscule—almost negligible—local language internet users. Back then, he recalls, internet meant only English-speaking users. “It was for people in the boardrooms and cities. Bharat was missing,” he says.

Though all the action was confined to top cities for corporates and startups, Gupta could sense winds of change. “What energises me is a lot of ambiguity and a lot of flux,” he says. A lot did happen over the next few years, both in terms of funding and growth for VerSe. While in 2009, the startup grabbed $14 million, the amount increased to $18 million in 2014. Next year, it jumped to $50 million; another $40 million came in 2016.

Along with funding came valuation and scale. VerSe turned unicorn last December, and is now valued at $3 billion. While Dailyhunt has 350 million MAUs (monthly active users), Josh has 124 million MAUs and 60 million DAUs (daily active users), claims Gupta. “It is still day zero for us. We have barely scratched the surface,” he says.

Back in 2016, it was literally day zero for Gupta. An explosion in the local language market, and users, stumped the founder. Reason: VerSe had been growing steadily, and slowly. “I was conservative and always capital efficient,” says Gupta, who dipped into his internal accruals to buy Newshunt in 2011. The idea was to build a sedate business and scale it the right time, when the market grows.
The market didn’t just grow. It exploded, “Suddenly, the local language market became the sexiest in the world,” says Gupta, adding that Indian and global companies of all kinds started pouring money to grab a slice of Bharat. Gupta was found lagging. “I was not prepared. That was my big failure,” he says.

The failure, though, led him to discover Umang Bedi, the former Facebook India head, who joined Gupta in 2018 and went on to become a co-founder. “We took a lot of bold decisions and the growth has been phenomenal,” he points out. The company, he adds, is firing on both the cylinders: While Dailyhunt has found a perfect product-market fit and has been aggressively growing and monetising via online advertisements and subscriptions, short-video app Josh too has been galloping. In FY20, operating revenue of Dailyhunt reportedly increased to ₹267.6 crore from ₹152.7 crore in the last fiscal. Losses during the same period jumped from ₹298.9 crore to ₹401 crore. Gupta declined to share the financials of FY21.

Though a clutch of Bharat-centric startups has been struggling to make money from Tier III and beyond, Gupta seems to have cracked the code to a large extent. The reason lies in identifying what to target, he says. VerSe zeroed in on the belly of middle Bharat, which has a huge disposable income, is aspirational and speaks the local language. “It is the fastest-growing market,” he stresses. Though the ARPU (average revenue per user) might not be as high as an English-speaking user, if one multiplies ARPU with the volume, the total addressable market becomes huge. “If your service acquires people for the wrong reasons, you will never make money,” reckons Gupta. Back in 2007, Gupta believed he had the right reasons to start his entrepreneurial journey. He was not intimated by the energetic 20-something founders with a massive headstart. Gupta preferred to look at the silver lining. “How many were taking the plunge when they were 36?” he asks. Age can either bog you down or make you more energetic. The point is, he explains, not to get bogged down. “Zoom in, zoom out and stay focussed,” he says, adding that entrepreneurship can’t be narrowly confined to lofty valuations. “It’s also about how do you manage yourself by striking a balance between the mind and body,” says Gupta, who turned 50 in November.

How does it feel to be roaring in the golden 50s? “I don’t feel 50 at all,” he says. “I used to feel like 60 when I was 40,” he laughs, adding that what matters to him is having a sound mind, a sound body and taking sound business decisions. After all, one can be high on josh in any age.