As a second-time founder, Sheth got a first-hand experience of the highs and lows of entrepreneurship. He's built an enterprising company in GupShup 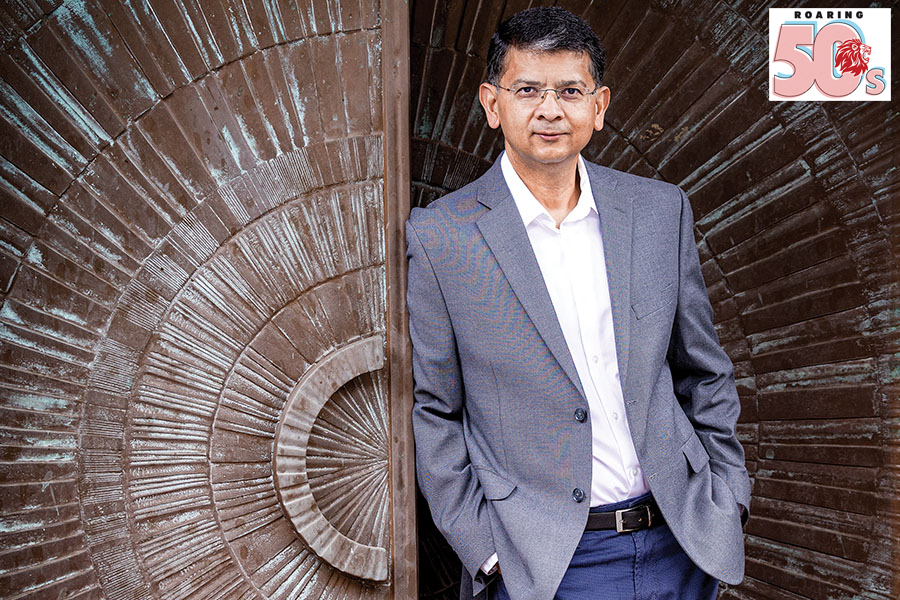 I am not euphoric when great things happen. Nor am I depressed when bad things hit us. This is what age does: Beerud Sheth, co-founder and CEO, Gupshup
Image: Robert Houser

Beerud Sheth had all the reasons to succeed from Day 1. That is what a bright 28-year-old thought when he dumped his lucrative Wall Street jobs—stints at Citibank and Merrill Lynch for four years—to start Elance in 1998. The IIT-Bombay grad, who went on to complete his master’s from MIT, was building an online marketplace for freelancers. All that mattered to him was intellectual stimulation, which, unfortunately, was largely missing in his previous jobs. “It was a lot of buy low and sell high,” he recalls, alluding to the nature of his profession. Though there was big money to be made, Sheth was not lured by the dollars. “Money alone never pushed me,” he says.

What pushed him out of his job was a disruptive idea. Over two decades back, working from a remote location was almost an alien concept. The young founder, with his big-bang revolutionary startup, was set to take the world by storm. Buoyed by a high-adrenaline rush, the rookie entrepreneur was ready to gallop.

With Elance, the Wall Street high-performer was trading comfort for a promising future. For the first year, his salary was zero. “I was living on my wife’s income,” says Sheth, explaining why it was hard for him to take a risk. A part of the blame, he lets on, goes to his high performance in school, college and then a high-paying job. He came first in the National Talent Search, a national scholarship programme at the secondary school level to identify students with high intellect and academic talent; was ranked third in the Indian Math Olympiad; was a top ranker in the IIT entrance exam; and went on to crack MIT.

A flawless track record, and a bright past, only meant one thing: A bright future. “It makes you think that you can succeed at everything,” he says. With a feeling of invincibility, the lines between the real and reel got blurred. 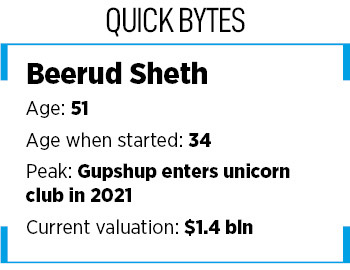 Meanwhile, in December 1998, the young prince made a fairytale beginning. Angels handed over a million dollars in funding next March. Then came the bigger cheques: $12 million and $50 million in October 1999 and August 2000, respectively. “It was like wow, awesome. We will be the biggest company in the world,” recounts Sheth, who is now 51.

The euphoria was not hard to understand. When you are a rookie entrepreneur, he explains, you are bound to be more elated when great things happen. In his enthusiasm to make it big, the founder pumped all money into the business. It was a big risk. “I don’t know if I was being brave, foolish or maybe a mix of both,” he quips.

In three years, he got the answer. It was 2001, the world was plunging into recession, money suddenly got sucked out of the system, and Sheth’s world came crashing down. Over the next few years, he braved the storm, worked hard and moved away from the leadership role at Elance. The dotcom bubble burst gave Sheth his first real message in entrepreneurship: Things can go horribly wrong due to external factors. “There are things you can’t control,” he says.

What, though, was under his control was to dream again. In 2005-06, he co-founded SMS Gupshup, a Twitter-like community site that enabled users to join groups of their interests and get updates through SMS (short message service) on mobile. After a few years, Sheth was about to experience a new high.

SMS Gupshup grew at an astounding pace. In 2010, it had amassed 70 million users in just three years since April 2007. “It was then the largest social network in India,” he claims, adding that the company raised $12.3 million in 2008, just a few days before the global financial meltdown. In January 2010, it raised $12 million. The next year, in August, came another $10 million. SMS Gupshup was cruising.

Little did Sheth know that he was about to hit another low. In 2011, the company was fast running out of cash. SMS Gupshup was spending crores in subsidising messages sent to all its users. The premise to foot the bill was simple. The second-time founder presumed that the cost of SMSes would come down. It didn’t. Second, the company failed to monetise. It planned to put footer advertisements at the bottom of the messages, but couldn’t do that because of regulatory issues. For Sheth, it was a sense of déjà vu. “At times, it’s not your fault when bad things happen to business,” he rues.

To avert an imminent death, SMS Gupshup made a B2B pivot. The name changed to Gupshup and the platform was now for enterprise messaging, which means that businesses could build conversational experiences across marketing, sales and support system, and send messages to consumers such as OTPs (one-time passwords), balance checks, payment confirmations, sales support, booking confirmations, delivery-related messages and discount information.

Fast forward to April 2021. Gupshup raises $100 million and enters the unicorn club—privately-held companies with a valuation of $1 billion or more. Three months later, it raises another $240 million and takes its valuation to $1.4 billion. The company now powers over 6 billion messages per month, has posted a revenue of ₹760 crore and an Ebitda of ₹77 crore in FY21. It’s now a profitable unicorn.

Sheth, for his part, is not excited. In fact, the reaction is muted. And the credit largely goes to the wisdom gathered over the last two decades. “You can’t go through this euphoria and depression cycle. You need to stay balanced,” he says. When bad things happen, they are not permanent. “And when great things happen, you never know things might go wrong,” he adds.

What he has also realised is that one must have a realistic perspective about business. He explains. If one fails because of external factors, then it’s not one’s fault. By the same logic, he underlines, one can’t take credit if the business succeeds because of such reasons. Humility, he reckons, is the only way to graduate from the school of hard knocks.

If it’s tough being an entrepreneur when one is in their 40s, 50s or 60s, it’s equally daunting and mentally draining for those who take the plunge for the second, third or fourth time. For founders like Sheth, what this means is keeping the fire in the belly intact. In fact, they need to keep stoking it every time it starts to die down. “I am still hungry. My peak is yet to come,” says Sheth, who flashes his wrist watch to show the time. It’s 12.30 am in the US. Sheth is wide awake, and has two more calls till 3 am. “This shows nothing but my hunger,” he smiles.

While for most, 51 might be a stage in life when one starts taking things easy, for Sheth, it’s a hard grind. And age has neither dragged him nor killed his passion. “Look at Elon Musk,” he says. The maverick founder has accomplished a lot, but still there is a lot that keeps him going. 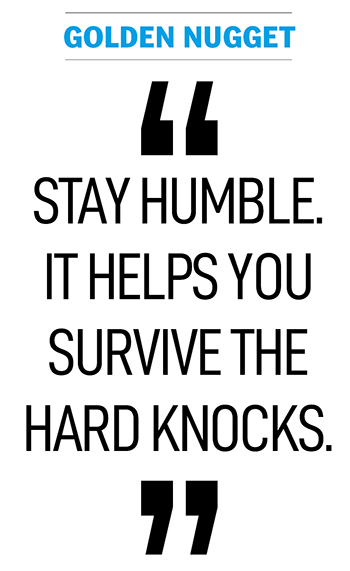 Ask him how he is different from a 20-something or a founder in their 30s, and he flashes a broad smile, and one-word reply: Maturity. It’s just like cricket or chess. “You only get better if you play a long innings. You can see the patterns, and you can spot the nuances,” he says. As a seasoned entrepreneur, he has also learnt to spot the difference between urgent and important. He explains. “I no longer reply to every mail instantly,” he smiles, adding that time management is an asset that one learns over the years.

After over two decades of toil, Sheth reckons that he feels more like a superman. There is a difference, though. His superpower is not a realisation that he can do everything.

“Now I know what I can’t do, and what I can,” he says. The power to know the difference is what the founders get in their roaring 50s.

Tweets by @forbesindia
Ubisoft launches 'playable' NFTs in its video games
Photo Of The Day: The final journey