How third-time entrepreneur Srikanth Iyer got it right

It took the founder of HomeLane, India's biggest home interiors brand, 20 years to realise what he didn't want to do—and that the lesson was as important as recognising what he did want 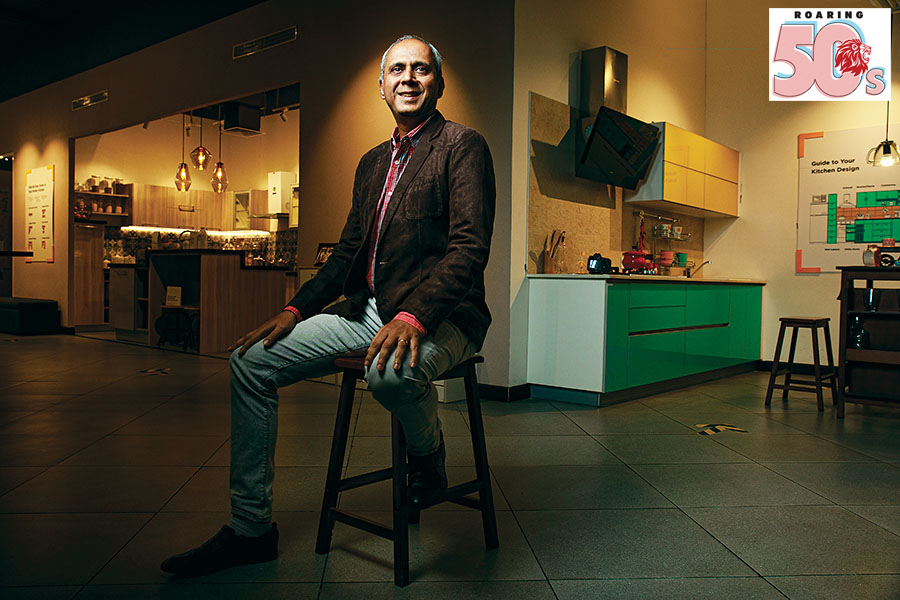 What matters most is to decide what you don’t want to do rather than what you want to do: Srikanth Iyer, co-founder and CEO, HomeLane
Image: Selvaprakash Lakshmanan for Forbes India

As a 23-year-old, Srikanth Iyer had amazing clarity about what he wanted to do in life. In 1993, when the computer science engineer joined the software product development team at Wipro, he dumped his maiden job after 90 days. Reason: He realised he wanted to work for himself. “I felt I would be better off spending time on myself than work for anyone else,” he recalls.

If quitting was easy, turning entrepreneur was like a morning breeze. Iyer knew he had to do three things. First, make nice and quick money. Second, stay away from taking risk. And last, find an industry which fulfilled the first two criteria. As it turned out, it was a no-brainer for the techie to find his sweet spot: Assembling and selling computers. In 1993, he started Total Solutions.

The business of unbranded computers then made ample sense. Indians were warming up to desktops, but it was largely confined to offices and large business establishments. For a major chunk of the working population, though, the bulky device was prohibitively expensive. The cost difference between branded and unbranded computers was steep due to high duties. And for Iyer, there was good money to be made. A computer priced between ₹35,000 and ₹40,000 used to give a profit between ₹5,000 and ₹6,000. “It was more than my one month’s salary at Wipro,” he laughs, adding that the business didn’t carry any risk as consumers used to pay in advance.

Over the next six years, the business scaled. Revenues touched a peak of ₹6 crore, Total Solutions managed to get a bunch of institutional users and the venture stayed immensely profitable. “Back then, there was no concept of angel funding or venture capital,” he says. Around 1997-98, Iyer spotted red flags. The cost difference between branded and unbranded computers had shrunk alarmingly, which meant that an earlier profit of ₹5,000 on each device came down to ₹500.

Sensing stagnation, Iyer diversified. He started managing the IT maintenance contract of big companies. Though there was money, the future looked bleak as the space was getting crowded, and the business could not be scaled. “It was too much of a risk to continue,” he says.

In 2000, Iyer again changed gears. He became the co-founder of edtech solutions provider Edurite Technologies, along with Jawahar Doreswamy. This time, too, the vision was clear. “We wanted to use technology to bring the best teacher to the last student,” he says, adding that he ran the venture as chief executive officer (CEO) for seven years. In 2007, the company was bought by TutorVista. Iyer got to run the India business of Edurite and TutorVista, along with the leadership team, which included Meena Ganesh. After four years, in 2011, Pearson bought the combined entity for $200 million. “It was an all-cash deal,” he says, adding that he continued working for the new owner and became CEO of Pearson India in 2013.

After a year—in fact, 20 years since turning founder—Iyer discovered what he didn’t want to do. “I worked as CEO for a year and I was a miserable failure,” he confesses. In 2014, he decided to quit. It was a flashback moment for him. Two decades ago, he left his first job to build something of his own. It was time to change lanes, again.

In mid-2014, Iyer founded HomeLane along with Rama Harinath, who left in three years. If in 1993, Iyer played an ‘unbranded’ game, 20 years later, he didn’t want to do so. This time it had to be a ‘branded’ play. After buying a house, he explains, consumers used to go through a harrowing experience in getting the interiors done. There were thousands of mom-and-pop dealers charging exorbitant rates, the market was unorganised, quality of service was pathetic, and consumers felt cheated.

Iyer spotted an opportunity. He knew the pain points of consumers who were looking for three things: Predictable quality, budget and timeline. “If I could offer these things,” he thought, “I stand a good change of building a pan-India brand.” There were two more pluses in the business of home interiors. First, there was no competition as no branded player existed across India. Second was scale. “I always think scale,” says the compulsive entrepreneur who couldn’t scale his first venture. Though the next—Edurite—scaled massively, by then, Iyer was not the captain of the ship.

With HomeLane, the 44-year-old Iyer wanted to be the captain of his fate again. “This is going to be either my success or failure singularly,” he resolved.

Over seven years later, Iyer finds himself in the fast and success lane. Revenues have jumped from ₹3 crore in FY15 to ₹268 crore in FY21; valuation has touched half-a-billion-dollar mark; HomeLane has emerged as India’s biggest home interiors brand; it has expanded to 19 cities and roped in former India cricket captain MS Dhoni as brand ambassador to further push its expansion and brand awareness. On an average, it delivers 25 homes every day. “We are the only ones who are profitable,” he claims. HomeLane, he informs, is now clocking a revenue run rate of ₹500 crore for FY22 and has a target of ₹1,800 crore for FY24.

Though HomeLane has grown at a fast clip, the beginning was excruciatingly slow. “It was a nightmare,” recalls Iyer. The reasons are not hard to fathom. The third-time founder was getting into a business in which he didn’t have any knowledge, forget expertise. “I was neither an architect nor an interior designer,” he says. The worst part, though, was that Iyer forgot what he didn’t want to do. He focussed on what he wanted, which was business and more business. In the first six months, his wish was granted. Contracts did come at a fast clip, and Iyer gleefully accepted all.

But there was a small problem. Iyer’s umbrella had big holes. “It was very tough to execute,” he rues. The execution was slow, and since HomeLane was doing everything—from civil work to designing—it resulted in chaos. Plumbers and carpenters were religiously at loggerheads and got into blame games. “Assemble all kind of workers at the same site and your project has a high chance of failing brilliantly,” he reckons. There was another collateral damage: Scale went missing.

Miraculously, Iyer realised what he didn’t want to do. “Doing everything was not an option,” he says. HomeLane decided to shun all civil work which involved breaking of walls. The focus shifted to doing a few things but executing them brilliantly. “We said yes to modular furniture,” says Iyer, who kept on narrowing the choices by striking off things he didn’t want to do. “We decided to have finite options for consumers, not infinite,” he says, explaining how having lesser SKUs (stock keeping units) helped. Instead of having 2,000 colour options for laminates—which any local contractor would pride himself in—Iyer offered just 163. “Even today, we don’t have a 164th,” he smiles. Lesser SKUs meant more control, which, in turn, meant better quality, better execution, better chances of sticking to the timelines and the budget. The move worked, and there was no looking back.

Having clarity of deciding what not to do, Iyer reckons, is something that people underestimate. “It actually narrows down your choice and makes your life much simpler,” he contends. At times, he lets on, knowing what you don’t want is more important than knowing what you want.

Back in 2014, Iyer didn’t want two things. First was business without scale. And second was not getting it wrong for the third time. “In entrepreneurship, there is no failure,” he says. Either one succeeds or learns.

Iyer, though, had to unlearn. The first big lesson in unlearning was to shun the old-fashioned way of growing. Iyer only knew one way of building businesses, which was brick by brick. On this lane, it might take 10-15 years to reach the destination. “There is a faster lane though,” he says. And Iyer discovered this route when TutorVista bought Edurite in 2007. The company grew from about ₹5 crore to ₹150 crore in about three years. “It was a hockey-stick growth,” he says. The new learning was to leverage equity, and put your foot on the accelerator. “Now I tell everyone to raise equity capital and go fast. Even if you fail fast. It doesn’t matter,” he says.

The second unlearning was to learn that, at times, loss is not a dirty word. For Iyer, this lesson was the most difficult. The reason was his background. His father was into a small-scale business of chemicals. “I never saw him talking of loss,” he recalls. Back in 1993, when Iyer started, he ingrained this learning in his DNA. “If you are not making money, then what are you doing business for?” was the argument of the young founder.

Now the 51-year-old has a new learning to offer. Build a business model, which might lose money in the short term because one is scaling fast, but in the long term it must be profitable. “Take five or 10 years, but business at the end of the day needs to be profitable,” he says. There is a difference, he explains, between building a valuable company and a company that actually gets you valuation. “They’re very different things,” he underlines.

What would be his advice to the ones who want to turn founders in their 40s or 50s? “Get started while you still have 10 years left,” he says. One must not give up, he adds. “There is no point cribbing about the cards you have been dealt with.”

Tweets by @forbesindia
Awais Ahmed, co-founder and CEO of Pixxel, on getting ready to launch Anand, the space startup's first satellite
Amazon fined $1.3 billion over antitrust violations in Italy