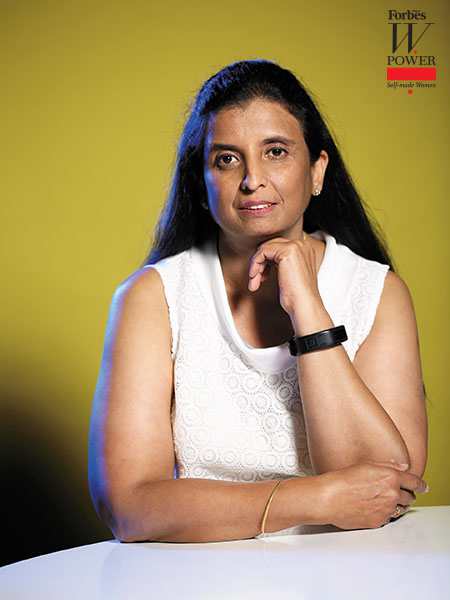 Early on in our meeting, Padma Parthasarathy self-deprecatingly refers to herself as the least qualified in a family of PhDs and “near PhDs”. The youngest of six siblings, she studied maths and physics, and chose to carve out her career in the tech world after an MBA from IIM-Ahmedabad. Her series of roles over the last three decades has seen her consult in the BFSI space, work on the software behind superannuation plans in Australia, and also play a key role in integrating scandal-ridden Satyam into Tech Mahindra. Her work has seen her spend time at marquee names like Ross Perot’s HCL Perot Systems (as it was then known) and Citicorp Overseas Software where she started her career.

At Tech Mahindra, Parthasarathy leads the consulting practice and works with clients to enable digital transformation. At present, digital contributes to 40 percent of its ₹34,000 crore March 2019 revenue and Tech Mahindra aims to make it a key differentiator in its offering. “We realised that the move [to digital] was more of a business change than a tech change and [we worked on] how we can model the business change,” she says, adding that Tech Mahindra has a tight definition of digital and so simply migrating a client to the cloud wouldn’t cut it.

Instead, as Parthasarathy explains, Tech Mahindra is working on getting customers to upgrade their businesses with them. It uses its knowledge of existing client businesses, where the consulting team works on how the client can upgrade its offering or customer experience, and then sells the idea to the client. There is now an increased use of artificial intelligence and process automation in their offerings.

For instance, a leading telecom company in the UK wanted to see what more it could offer customers. Some of the ideas that Tech Mahindra offered were connected homes, smart metering and usage-based insurance, allowing the client to significantly up its customer revenue. “We are no longer waiting for a customer purchase order to start work,” she says.

Then there are routine legacy businesses where Tech Mahindra is able to upgrade its offerings to its clients. For instance, customers calling a telecom company with a complaint for a malfunctioning router may be able to fix it themselves, saving the need to send a technician over. If this trouble-shooting guide can be automated, it can result in considerable savings. A digital service offering at Tech Mahindra would offer and monitor this solution for the client. These business pitches to customers are now done proactively. This also allows the company to grow revenue more rapidly in a non-linear manner. Parthasarathy oversees 2,000 employees across two consulting teams.

In getting to her present role, Parthasarathy spent considerable time in getting Satyam integrated into Tech Mahindra. It is a story she tells with aplomb. In 2008, she had decided to take a break. She had worked for various companies and spent time in China setting up a sales office for Tech Mahindra. She was interested in sustainability and had planned to work with companies and their sustainability projects. But corporate spending on sustainability was cut back after the global financial crisis and her plans deferred. At the same time, Ramalinga Raju admitted to fudging Satyam’s books in January 2009. Next month, Satyam was up for sale and CP Gurnani, managing director at Tech Mahindra, needed a trusted hand to look into the business and see if it was worth bidding for.

“This was an interesting time as neither bankers nor lawyers were willing to underwrite the numbers,” says Parthasarathy. She recalls many hours of spreadsheet analysis on clients, the contracts they had entered into, and the work Satyam had performed to get a sense of what the company was worth. On her visits to Hyderabad, she was shown mainly real estate and most of the number crunching was done in Bengaluru.

Based on her team’s analysis, Satyam had a revenue potential of $900 million to $1.3 billion (₹4,500-6,500 crore then). Her numbers accounted not only for cancelled contracts but also for clients that were likely to renegotiate as well as those that would be forced to cancel in future. There was also the threat of lawsuits that the company would have to negotiate. The Tech Mahindra top brass was clear that it wanted to place one final bid and not renegotiate. In the end, their bid edged out bids by L&T Infotech and a US-based private equity firm.

“I have known Padma for 20 years, and to me she is a quintessential change maker. She is a central pillar to the ‘Run, Change, Grow’ strategy at Tech Mahindra, leading the change in digital and consulting. I look up to her in critical times and her contribution towards integrating Satyam seamlessly into Tech Mahindra remains a cornerstone of her professional journey,” says Gurnani.

As she enters her fourth decade in the IT business, Parthasarathy has seen it evolve from offshore centres in India to capitalising on the Y2K opportunity, to writing cutting-edge software as well as helping clients on their business needs. Parthasarathy, who likes to unwind with a good book—Atul Gawande is one of her favourite authors—and yoga, expects the digital transformation at Tech Mahindra to grow manifold in the next decade.