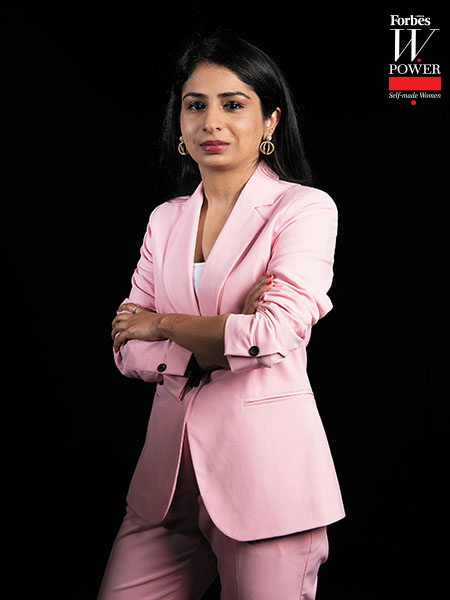 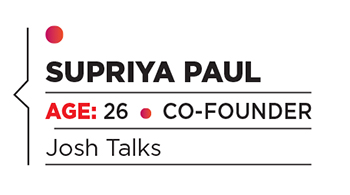 Supriya Paul always exhibited disdain for the ‘herd’ mentality. As a child, when her friends in school opted to learn violin, Paul went for Hindustani classical music, the only student in her class to do so. “I learnt and enjoyed it for 13 years,” she says. Paul stayed true to her DNA in college as well. When most of the students enrolled themselves in a chartered accountant course or decided to pursue MBA after graduating in commerce, Paul, 26, did neither. “While my friends settled for a corporate job with hefty pay packages, my parents wanted a stable life for me,” she says. Instead, she co-founded Josh Talks, a startup that uses storytelling as a tool to inspire and motivate the youth to reach their full potential, with Shobhit Banga in January 2015.

The decision to turn an entrepreneur—and that too by starting a business that didn’t make much sense to most—bemused friends and family. Josh Talks was looked upon as an NGO. “I pleaded for a year from my parents to prove that it was a money-making venture,” she says. Though her wish was granted, the going was tough. There were not many takers for the business idea and the model. While venture capitalists couldn’t figure out investment potential, Paul struggled to explain ‘revenue run-rate’ to them.

Undeterred, she persisted. What kept her going was a conviction in the business model. While Josh Talks made a sedate beginning—revenues of ₹40 lakh by March 2017—it picked up steam soon and closed FY19 with ₹5.58 crore; it is set to close the current fiscal at ₹13.5 crore. From just one Hindi YouTube channel in October 2017, it is now available in eight vernacular languages: Hindi, Marathi, Bengali, Tamil, Punjabi, Gujarati, Malayalam and Telugu. It currently has some 8.5 million subscribers, most of them from Tier II cities and beyond. It has organised over 1,500 talks and boasts of 45 million monthly views and over 800 offline events (including workshops) attended by 1.5 lakh people. “When you don’t follow the herd, it takes time for people to accept what you have carved,” says Paul.

What has immensely helped the entrepreneur in living her dream is perseverance. “You have to hang on when the odds are heavily stacked against you,” she says about her success mantra. When nobody gives you a chance, she adds, you need to give yourself a chance. “It starts with you. Trust yourself and your capabilities,” she says, adding Indra Nooyi, who Paul met at a conference last year, is her inspiration. She lets her work do the talk, says Paul.

With an explosion in mobile consumption of data in India, Paul, reckons Anil Joshi, managing partner at Unicorn India Ventures, has found her sweet spot. “She is in the right space, at the right time and with a right offering,” he says. Digitisation has given immense power and choice in the hands of people to consume rich content, which was earlier not accessible. Paul, adds Joshi, is making most of this trend by monetising her business model. “She selected a unique venture, took a risk and has made a successful start.”

“ You have to hang on when the odds are heavily stacked against you. Trust yourself and your capabilities.”


Paul, for her part, wants more women to take risk. As a society, she points out, we are conditioned to think and perceive failure as a stigma. “It’s not. It’s okay to fail,” she says, adding that one must quickly learn from failure, and keep trying. In some of her early pitches to venture capitalists for funding, Paul recalls, she failed badly. “I came across as a complete idiot. But it’s okay. I learnt a lot,” she says.

If there are not enough women entrepreneurs in India, Paul believes it can be due to the attitude of following a herd mentality. “Step out of your comfort zone, and don’t look for easy options,” she says.

Though she has been in the limelight at such a young age, Paul feels every woman who steps out of home to work needs to be applauded. “It’s not easy to work,” she says, citing an example of a domestic abuse victim who recently mustered enough courage to end her marriage and find a job. Though drawing a salary of ₹15,000 is not a big deal, what is massive is the courage to start afresh on one’s own terms and conditions. “These are real inspirational stories that Josh Talks is narrating to Indians across the country,” she says.