Consure Medical: Towards a clean bill of health 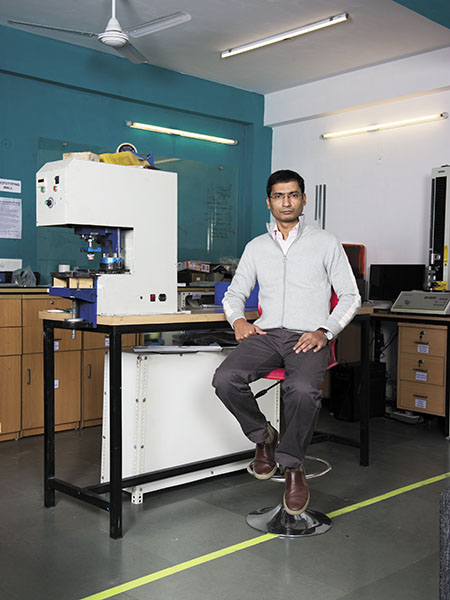 Amit Sharma, co-founder and chief technology officer at Consure Medical
Image: Amit Verma
For over five decades, health care providers everywhere have banked on the Foley catheter to drain urine from the bladders of patients who cannot do so normally. It is also used to treat urinary incontinence—a condition marked by excessive urination. The device comprises a tube that is passed through the urethra and into the bladder to drain urine into a bag.

While the catheter has now become a workaday device for medical care givers, a comparable tool in faecal management has eluded medics.

More often than not, nurses or bystanders are forced to change soiled bed sheets by hand, particularly in the case of bedridden patients who are immobilised by medical conditions such as a stroke. On other occasions, patients are forced to spend days on their unclean beds or use adult diapers, which leads to bed sores and cross infections.

Now, a little-known company is revolutionising the field of care giving with its faecal incontinence therapy device. New Delhi-based Consure Medical—the brainchild of Nishith Chasmawala, 37, and Amit Sharma, 34—has been selling its stool management device, Qora, across 50-odd hospitals in India and the US.

Qora is an applicator inserted into the anal cavity to provide a pathway for stool diversion with very little leakage. The stool is diverted to a collection bag before being disposed of. “Stool management is such a ‘yucky’ problem and an assault on the dignity of people,” Amit Sharma, co-founder and chief technology officer at Consure, tells Forbes India. “A lot of times, family members or the women in the family have to do the cleaning. In bedridden patients, faecal contents lead to a 22 percent increase in bed sores. That’s how we came up with a product that is clinically better and reduces the cost for hospitals.”

From Stanford to India
Consure Medical started out when Chasmawala and Sharma met during the Stanford-India Biodesign Programme—a collaboration between Stanford University, the New Delhi-based All India Institute of Medical Sciences (AIIMS) and the Indian Institute of Technology Delhi. The project is funded by India’s department of biotechnology.

Chasmawala, Consure’s CEO and a medical engineer, had worked with US-based medical devices manufacturers Cordis Corporation and Kyphon before opting for the programme. Sharma, on the other hand, had worked with India’s largest carmaker Maruti Suzuki and CryogenX, a design consultancy firm, before coming on board.

The duo spent countless hours as part of the programme trying to identify medical products before they chanced upon the need to address the shortcomings in faecal management. A programme teammate’s relative had taken critically ill and was struggling with incontinence. 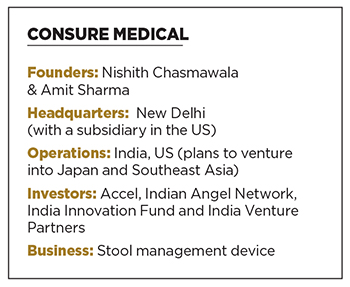 Back then, like today, adult diapers were the mainstay while managing faecal incontinence, leading to dermatitis and skin breakdowns. “Adult diapers have a lot of related complications,” says Sharma. “In women, for instance, stool could go into the urinary tract and cause urinary infections. We wanted a technologically different and intelligently designed product that could help these patients.”

In 2012, the duo started Consure Medical with seed funding from Indian Angel Network, India Innovation Fund and India Venture Partners. The name Consure, Sharma says, is short for ‘continence assured’ and much of the company’s differentiating factor is the technology applied in their product. “Many of the products that are in the market aren’t designed considering the physiology and anatomy of the patient,” Sharma explains. “Qora uses an ergonomically-designed, self-expanding latex that makes it easier for the patient [to deal with faecal incontinence].”

Perhaps, Qora’s superior design is also the reason why the early stage investors, along with US venture capital firm Accel, participated in another round of fundraising and invested an undisclosed amount in the company.

Currently, Consure’s competition include Danish multinational Coloplast, the UK-based ConvaTec and US-based Hollister that market their own stool management kits.

India and beyond
Consure sells its Qora units through prescriptions and although the manufacturer believes an untrained professional can insert them, the company doesn’t want to risk injuries. “Getting clearance from the authorities for an OTC [over-the-counter] product is tough, and even though the device is easy to use, any injury can spell trouble,” says Sharma.

Consure sells three variants of Qora. The cheapest, priced at ₹6,000 and intended for a single use, includes the applicator and a non-replaceable collection bag. “That product is aimed at those suffering from diarrhoea, when doctors know the patient will recover in a few days,” says Sharma.
The second variant is priced around ₹14,000 and Consure is revamping it with a replaceable bag; the unit can be used for up to 29 days. The most expensive variant, priced at ₹18,000, can be used even during MRI scans. So far, the company has sold a combined 1,000 units.

“My sense is that the demand for such products is going to rise,” says Dr Govind K Makharia, a professor at the department of gastroenterology at AIIMS. “Compared to the products in the US, Consure’s device is cheaper. It is a boon as the entire process is hygienic. Maybe now, they can look at new designs aimed at people who aren’t bedridden and yet struggling with incontinence.”

The company started sales in India last year and for now, much of Consure’s business is spread across the US and India’s metropolitan cities, including Delhi, Bengaluru, and Mumbai. It is now firming up plans to enter the Japanese market and other Southeast Asian countries. “The global market continues to be our focus area,” adds Sharma. “We want to build an ethical and credible business.”

With faecal incontinence affecting nearly 100 million bedridden patients across the world, Consure has before it a massive market waiting to be tapped.