Drunken Monkey's on a high

How Samrat Reddy's smoothie brand, Drunken Monkey, is carving a niche in a country dominated by tea and coffee chains—and what challenges lie ahead 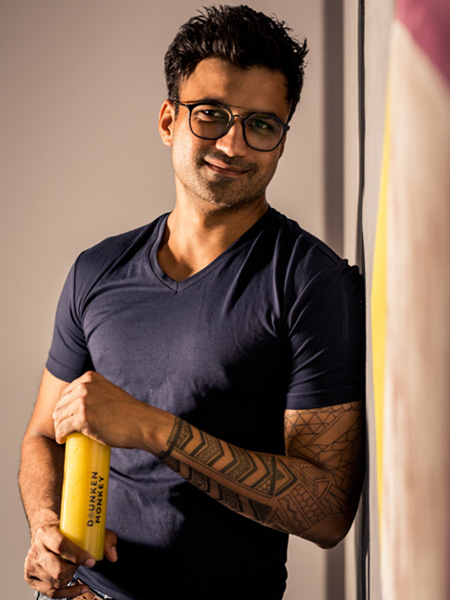 Samrat Reddy has lived with the expression ‘Are you drunk?’—after all, the 34-year-old first-generation entrepreneur has heard people utter the three magic words umpteen times, whenever he has done something seemingly absurd to get a ‘high.’ A software engineer from Chennai, Reddy, who is the founder of smoothie chain Drunken Monkey, worked in Australia for a year in 2007 at a handsome salary of $50,000, got promoted within nine months and received an offer to stay back Down Under for another four years. Reddy not only declined the offer, but quit to pursue an MBA from Scotland. Reddy’s professor parents, as expected, were shocked. “Are you drunk?” came the verbal volley. Reddy’s employer too resonated the same emotion. “Why would you do so?” was the obvious question. Reddy said the job didn’t give him “a kick”; and returned to India in 2009 after his MBA.  Now, the engineer decided to turn entrepreneur. For his parents, it was a déjà vu ‘Are you drunk?’ moment. “I want to do business. I don’t know what but it has to be business,” was Reddy’s defense. The challenge of exploring unchartered waters, where the chances of failing as well as possibilities of striking gold were high, seemed mentally stimulating. So he got into the business of 3D innovation by starting a studio in Chennai, ran it for five years with his friends, and then began his hunt for new high. After a year of brainstorming, Reddy plunged into the business of smoothies by rolling out Drunken Monkey in 2016.  “Who sells smoothies? In fact, who knows smoothies?” were some of the jibes he got. Cut to 2019. Reddy closed the March 2019-ended fiscal at a revenue of Rs 20 crore, with 65 outlets across 20 cities. Contrast it with the company’s performance in its first year: Rs 1.8 crore, and five outlets across Hyderabad. “This is what keeps me naturally high,” he says, alluding to the tagline of his smoothie brand, ‘Naturally high’. But why the name Drunken Monkey? The name and the product, he says, should give you a high. Monkeys, he explains, live on fruit. Moreover, a quirky name could break the perception that healthy products must also be boring. Drunken Monkey, say branding experts, has navigated two extremes successfully: the boon of market penetration possibilities and the bane of category awareness costs. “What Chaayos did to tea, Drunken Monkey is doing to smoothies,” says Abhik Choudhury, founder of Salt and Paper, a brand consultancy firm. Success, though, is sweeter for Drunken Monkey, Choudhury says. While tea has been in India’s DNA, smoothies are still confused with milkshakes.
Monkey business
The beginning, indeed, was confusing, and challenging. Market research experts, roped in by Reddy to prepare a blueprint, were the first ones to press the panic button. “Don’t do smoothies. It will not work with perishable fruit items,” they cautioned. Others pointed to the unorganised nature of the market. Some didn’t believe a company could try to turn a healthy product into a lifestyle brand. “India is not the US. Try opening a dosa or biryani store,” was some unsolicited advice. But Reddy was adamant. “I was stubborn because I knew the challenge of doing something that others couldn’t was a real high,” he smiles. The first big challenge was to create awareness for the product and clear confusions. Reddy had a tough time explaining the difference between a milkshake and a smoothie, but that wasn’t the only source of confusion. The monkey logo on the product bore similarity to that in a beer brand: Bira. “People started coming to us asking for beer,” he says. “We flipped this challenge into opportunity—‘Go and have your beer, and come back to us to kill your hangover’.” The trick worked. The next challenge was to create a category in a largely unorganised market. Reddy charted out an ambitious expansion plan: 700 outlets over the next five years. The plan, it turned out, was over-ambitious. Reddy realised and set the course right a year ago. “ The game is no longer about the number of outlets, but making it convenient for people to buy,” he says. The expansion plan was halted and the business model rejigged to focus on online and smaller company-owned stores, reducing operational costs. A wise monkey, it seems, is better than a wild one. Reddy, however, still hoards the animal instinct. “What’s the worst-case scenario? You hit rock bottom. That’s it,” he says. Rather than being overwhelmed by fear, Reddy says he is excited by the opportunity to create India’s first big smoothie brand. “People might call me drunk for harbouring such ambitions, but it’s okay,” he smiles.

Tweets by @forbesindia
Comic: Akshay Kumar is slaying it...for Bollywood's ageism debate
How ethical hacking boosts cybersecurity and what it means for your firm