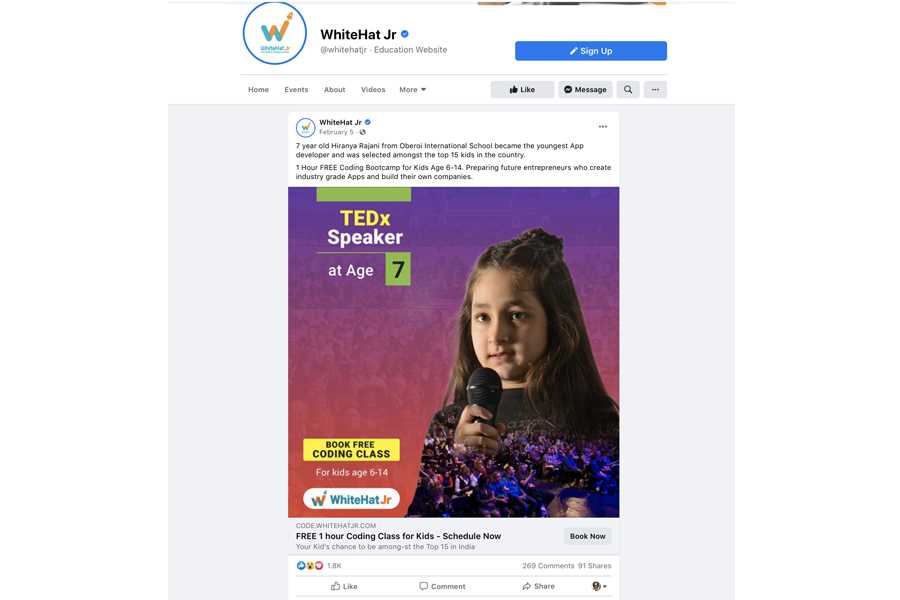 In a major blow to WhiteHat Jr, the Advertising Standard Council of India (ASCI) has asked Byju’s-owned kids coding startup to pull down its advertisements that it says made dubious and unsubstantiated claims.   “ASCI has processed 15 complaints against seven advertisements of WhiteHat Jr,” Manisha Kapoor, secretary general of ASCI, the advertising self-regulatory body, tells Forbes India. Five of these advertisements, she points out, were in potential violation of the ASCI code. The advertiser, she lets on, agreed to immediately withdraw the advertisement when ASCI asked them for their response. “One such advertisement was taken up suo motu by ASCI as well,” says Kapoor. For two advertisements, ASCI didn’t find any violation, and complaints against them were not upheld. One of these advertisements, could be in potential violation of The Emblems and Name (Prevention of Improper use) Act, and the complainant was directed to approach the government for this potential violation, she adds. The aggressive claims made by WhiteHat Jr on social media have also come under the scanner. “In recent times, some advertisements have come under scrutiny on social media, and ASCI has been tagged,” she says. The ASCI team connected with the advertiser, and was informed that some of the advertisements on social media are old and have already been withdrawn. “The advertiser also has assured ASCI of their cooperation to adhere to the ASCI code going forward,” Kapoor adds. Rabbit out of the Hat WhiteHat Jr has been on an aggressive marketing spree, with ubiquitous TV and social media ads pushing coding classes for kids. Some of the messaging in these advertisements has been questioned. For instance, a testimonial on the company’s website until early this month shows a child touted to have built the world's first eye testing app. “It's taking him to Silicon Valley, where he will meet top scientists, engineers,” proclaimed the promotional messaging. Another message was addressed to parents: “Your kid will be on the next flight to Silicon Valley, USA,” it read, alluding to a programme that handpicks passionate early coders and sends them to meet scientists from tech giants such as Google and Waymo. “This (will) shape their future destiny as tech creators,” the message underlines. It exhorts the parents to kickstart their ‘kid's journey to create the next billion-dollar idea of the tech world.’ Forbes India tried to cross-check all the claims made by WhiteHat Jr, which was bought by India’s biggest edtech company Byju’s in April this year. All the apps claimed to be made by the kids do exist on Google Play. However, many of the apps have a few thousand downloads and sub-par reviews, and most interestingly, are registered in the name of WhiteHat Jr, not in that of the child who developed them.  WhiteHat Jr did not reply to an exhaustive list of questions sent by Forbes India early this month about these claims. WhiteHat Jr has also come under fire on social media for allegedly censoring dissent—as a recent Forbes India story shows, multiple people who have criticised the company’s campaigns and/or product have found their posts swiftly wiped off the internet, on grounds such as ‘copyright infringement’. This was observed across platforms including YouTube, Quora, Reddit, Twitter and LinkedIn. After Forbes India contacted both WhiteHat Jr and YouTube for this alleged censorship, one of the complainants, Pradeep Poonia, had all of his 16 videos made about the company reinstated after being blocked for weeks. However, other complainants such as Jihan Haria have not had their blocked videos reinstated yet. Covid-19 and the pandemic of misleading ads A week ago, the advertising self-regulatory body issued an advisory to counter the pandemic of misleading claims made by advertisers, especially post-pandemic. While the pandemic, ASCI stressed in a media release, is a difficult time for everyone, it cannot be a platform to mislead consumers.

“We want advertisers to be more mindful in creating advertisements and making claims related to Covid-19,” says Kapoor at ASCI. Given the extended lockdowns, the official added, people are concerned. “But we want products and advertisements to stick to claims and promises that are well backed by adequate substantiation,” she says. The advisory to advertisers is meant to safeguard consumers as well as to ensure the highest standards for advertising, Kapoor says. The advisory directed brands to stay away from making misleading claims. During the pandemic, the advisory noted, it is advised that advertisements avoid claiming destruction or removal of any virus other than coronavirus (Covid-19) in order not to violate provision of ASCI code’s clauses 1.4 (Advertisements shall neither distort facts nor mislead consumers by means of implications and omissions”) and 1.5 (Advertisements shall not be so framed as to abuse the trust of consumers or exploit their lack of experience and knowledge”). “In case advertisers choose to claim removal of any other virus in their advertisement, they should include a disclaimer such as “claim not applicable to coronavirus (Covid-19)” or a similar message with the disclaimer size and position as per the disclaimer guideline of ASCI,” the advisory underlined.   The pandemic, as it turns out, has seen a flood of brands from all walks of life—soaps, disinfectants, paints, herbal and ayurvedic products, and even fabric—making unsubstantiated claims of curing Covid-19 or killing 99.9% of viruses. In April, the ministry of AYUSH sought ASCI’s help to alert it about misleading advertisements. Since then, ASCI has processed 250 advertisements and reported 233 from the healthcare sector to the ministry. In June and July, ASCI investigated complaints against 363 advertisements, of which 76 were promptly withdrawn.

Tweets by @forbesindia
Capital Ideas: The rags to riches journey of A.Velumani in building the Rs 4,000 crore Thyrocare
How 'filthy' is India's air? Take a look