Monetary Repression: The End of Trust 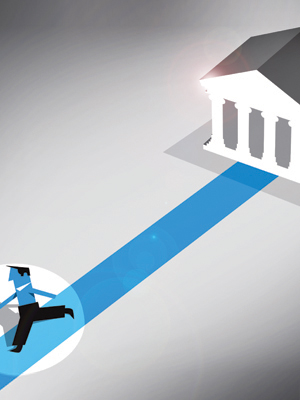 Policy makers are now systematically undermining trust in instruments and institutions, and are turning to financial repression in trying to deal with the current economic crisis.

Financial repression, a term coined in 1973 by Stanford economists Edward Shaw and Ronald McKinnon, entails a variety of measures to channel funds to governments to help liquidate otherwise unsustainable debts. It can take the form of higher taxation, manipulating interest rates, regulations to force purchase of government bonds, controls on the free movement of capital and nationalisation of businesses or seizure of savings. Ironically, financial repression is generally packaged as measures to ensure the stability and solvency of the economic and financial system.

Current government policies focus on low interest rates, with returns artificially set below the true inflation rate. Where interest rates are near zero, governments print money, manipulating the amount rather than the price of money.

These measures reduce borrowing costs, allowing borrowers to maintain high levels of debt. Rates below the rate of inflation help reduce the value of the debt, effectively decreasing the amount that must be paid back in economic terms. The policy subsidises borrowers at the expense of savers.

These policies debase currencies, undermining money’s function as a mechanism of exchange and a store of value. Investors in government bonds, once an unquestioned store of wealth, are now threatened by the risk of sovereign defaults or destruction of purchasing power. Some nations have used regulations and political pressure to force banks and investors to adopt patriotic balance sheets. This entails institutions purchasing government bonds and prioritising lending to domestic borrowers.

More aggressive financial repression is also evident. In the restructuring of Greek debt, retrospective legislation was used to deliberately prefer official creditors including European Central Bank (ECB), allowing them to avoid losses at the expense of other creditors. Unsurprisingly, investors are now reluctant to finance some governments, fearing adverse future changes to their legal status.

Governments have seized private savings or have directed it into approved investments. In Spain, the approximately €60 billion Fondo de Reserva was created to guarantee pension payments in times of hardship. The fund’s investments now constitute primarily (97.5 percent) of Spanish government bonds.

In India, tax authorities retrospectively imposed a large tax liability on UK telecom firm Vodafone. Raghuram Rajan, head of RBI, commented: “A government that changes the law retrospectively at will to fit its interpretation introduces tremendous uncertainty into business decisions, and it sets itself outside the law. [It] has missed a golden opportunity to show its respect for the rule of law even if it believes the law is poorly written. That is far more damaging than any tax revenues it could obtain by being capricious.”

The ECB has implemented programmes that entail ‘monetary financing’, that is, central bank funding of governments prohibited under European Union treaties. As Jens Weidmann, president of the German central bank, the Bundesbank, warned in November 2011: “I cannot see how you can ensure the stability of a monetary union by violating its legal provisions.”

The financial crisis revealed numerous instances of financial institutions placing their own interest before that of clients and exploiting unsophisticated customers for egregious profits.

On April 14, 2012, a former Goldman Sachs executive director, Greg Smith, published a letter criticising “toxic and destructive” practices within Goldman Sachs, one of the world’s largest investment banks. The letter followed a series of damaging disclosures about Goldman Sachs, labelled by Rolling Stones magazine journalist Matt Taibbi as “a great vampire squid wrapped around the face of humanity, relentlessly jamming its blood funnel into anything that smells like money”.

The criticism highlighted practices focussed on getting clients to invest in securities or products that Goldman was interested in getting rid of. The letter highlighted the use of complexity to confuse clients and the focus on highly profitable and (sometimes) unsophisticated clients who did not fully understand the risks of the transactions that they were being encouraged to enter into.

In the lead up to the financial crisis, finance executives received high salaries and bonuses, based on dubious, often manipulated, profits. Even in the aftermath of the crisis, after governments were forced to support ailing banks, bankers’ voracious desire for large bonuses has continued. The inability or unwillingness of governments to rein in an industry which Martin Wolf of the Financial Times described as “a risk-loving industry guaranteed as a public utility” remains a point of contention.

To preserve the value of their savings, savers are reversing the historic trend to ‘the abstraction of property through paper currency’. There is a trend to switch from financial instruments to real assets—real estate, gold, commodities, farmland and fine arts.

There is growing interest in alternative paper money, such as the Bavarian Chiemgauer and England’s Lewes Pound. Alternative currencies have limited acceptance within a small area and (sometimes) a finite expiry date. They are designed to encourage local business.

Interest in digital currencies such as Bitcoin also reflects, in part, increased concern about the monetary system and a currency that cannot be readily manipulated by policy makers. Irrespective of whether these alternative currencies succeed, they are testament to a growing distrust of governments and the financial system, representing a challenge to the authority and apparatus of states.

In the US, on Bank Transfer Day, an online phenomenon launched by an unhappy Bank of America client, disgruntled customers withdrew money from traditional banks, transferring it to not-for-profit credit unions owned by members. The growth of peer-to-peer lending, which facilitates the matching of savers and borrowers for small consumer loans, also evidences this trend.

Loss of trust even extends to dealings between central banks. In early 2013, Germany’s Bundesbank announced that it would move around 674 tonnes of its holding gold bullion from foreign central banks (the Federal Reserve Bank of New York and the Bank of France in Paris) to Frankfurt. While the move only affects about one-half of the Bundesbank’s gold reserves and officials stressed that there was no question of “mistrust”, Bill Gross, a founder of investment firm Pimco, tweeted the obvious inference: “Central banks don’t trust each other?”

Reviled and mistrusted, money and banks throughout the world are losing legitimacy.

Satyajit Das is a former banker and author of Extreme Money and  Traders, Guns & Money

(This story appears in the 07 February, 2014 issue of Forbes India. You can buy our tablet version from Magzter.com. To visit our Archives, click here.)