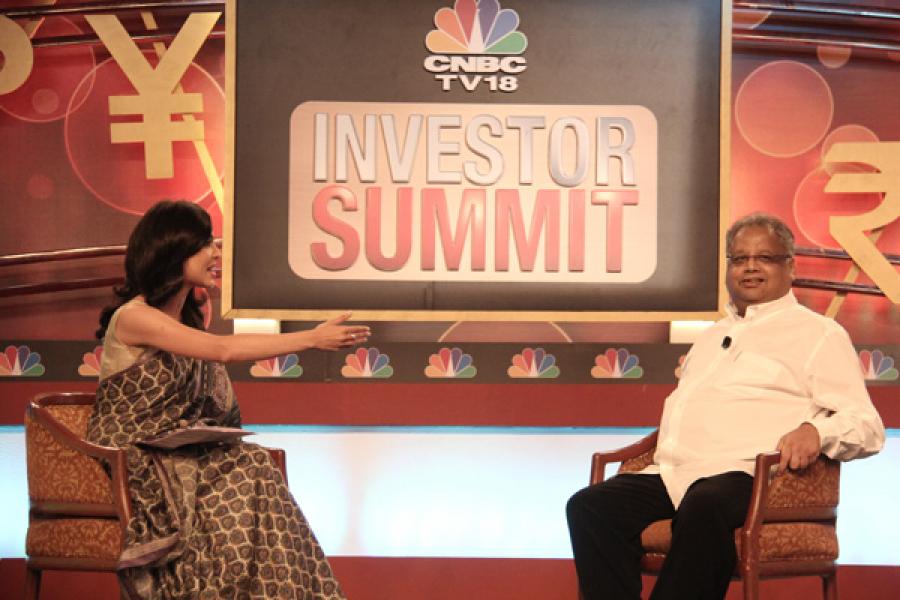 Brace yourself for some startling forecasts. The Nifty index, currently hovering around 8,540, could touch the 1,25,000-mark in the next 15 years, says billionaire investor Rakesh Jhunjhunwala. He also believes that India could witness economic growth at a rate faster than China in three four years. The savvy investor expects inflation – which has been a cause for concern for Reserve Bank of India governors in recent years – to fall to four percent in the next few years, as global oil prices remain sluggish.

Speaking at an CNBC-TV18 Investors Summit to celebrate the 15th anniversary of CNBC TV18, Jhunjhunwala said: “I see no reason why the Nifty cannot grow more than what it has in the past ten years. It could grow at least 10-12 times and be at 1,25,000 in 2030.” If earnings grow at 18 percent, in 15 years they would grow 15 times.

Some of India’s most successful investors and market experts from India and the Asia Pacific region expressed confidence in the revival of India’s economic growth story and a continuation of the current bull run.

India, which witnessed near double digit growth in the previous decade, grew by 4.7 percent in the year to March 2014. But investor and business confidence has started to build in the past few months, riding on the optimism that Prime Minister brought with his ascent. The benchmark BSE Sensex index hit a record 28,822.37 points last week and the Nifty rose to its lifetime high of 8,623 points this week.

“We Indians cannot envisage the kind of change which can occur in the coming ten years,” Jhunjhunwala, partner at asset management firm Rare Enterprises, told a packed room of investors.

His confidence came from India’s positive demographics and being a balanced economy. “We have the vegetables, ghee, vessels, the masala and gas. We only need someone to cook it. [Prime minister] Modi is the instrument for change. He has decided to do things at a measure and pace, which is possible. He is making dots, which will become a circle. He is the perfect instrument,” he added.

Jhunjhunwala, who has made his fortune by spotting undervalued stocks in previous decades, however, declined to identify multi-bagger stocks. “Everything looks good. It is like a buffet, eat what you want, but do not overeat,” is all he said.

Manish Chokhani, well-known former investment banker, was a tad more candid when he said investors should spot companies led by young leaders. He said it would not be wrong to bet on large conglomerates like the Tata and Aditya Birla groups being recast (in coming years), which are both being led by people in their 40s.

Morgan Stanley India’s managing director Ridham Desai agreed with Jhunjhunwala’s forecast of inflation dropping to four percent in the next few years. “India could see a disruptive positive shock from oil. The country will get a big inflation surprise on the downside,” he said.

RBI governor Raghuram Rajan, on Tuesday, kept interest rates unchanged, much to the disappointment of business leaders, stating that he wanted to be sure that the lower trajectory of inflation “was real”.

What could possibly halt India’s bull run? A nuclear war with Pakistan, says Jhunjhunwala. “From a government perspective, I want faster, more transparent and easier disposal of government decisions,” he added.

Abhay Laijawala, managing director and head of research at Deutsche Equities India said the markets may correct in March-April next year. “Between now and February, there are macro catalysts, like possible rate cuts and a sovereign ratings upgrade. These drivers are compelling today. But if earnings season and the macro-economy is not stabilising, we could see a period of indigestion and a first real correction in 12 months,” Laijawala said.

Jhunjhunwala, however, argued that India’s ínterval in the market rally was “still some time away”.

Ridham Desai stressed that earnings growth would continue to lead India’s future market trends. “The next four to six quarters India could see 20 percent earnings growth.” Morgan Stanley has forecast the Sensex to hit 32,500 points by December next year.

Most experts were confident that mid-cap indices could give better returns than benchmark market indices, but the downside risk was equally high.

Madhusudan Kela, chief investment strategist with Reliance Capital urged investors not to be swayed or influenced by external factors while making investment decisions. “Hold on to your conviction,” Kela said.