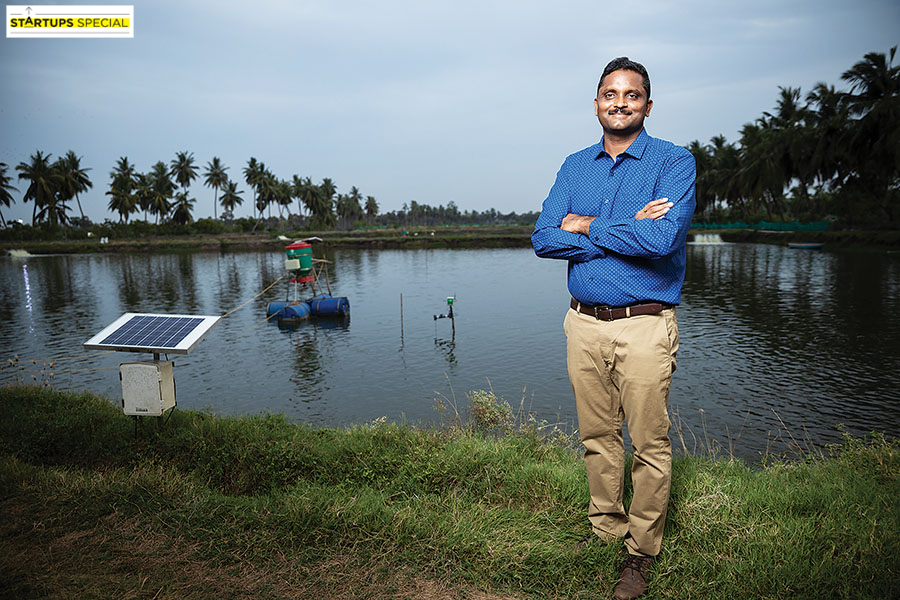 Electrical engineer Sreeram Raavi spent the early years of his career at a fab-less semiconductor design company in Bengaluru, designing chips for wifi routers and broadband equipment. Born and raised in Pedanandipadu village in Andhra Pradesh’s Guntur district, around chilli and cotton farms, his heart was always in farming.

“My passion was in applying technology to agriculture, and I was applying to various universities overseas to study agriculture robotics,” says Raavi. “I didn’t make it, so I decided to quit my job and follow my passion.”

In 2011, a freak change in the water quality of a pond owned by an uncle wiped out its entire population of fish overnight. They suffered a monetary loss. This propelled 36-year-old Raavi to think about what could be done to use technology to keep track of the water quality so that farmers can take preventive measures.

His uncle told him that aquaculture farmers had no scientific tools or methods to keep track of the vital parameters of their ponds, especially the volume of dissolved oxygen. If that oxygen level goes down beyond a point, the fish die. His uncle’s predicament, coupled with Raavi’s knowledge of sensors, triggered the idea behind his startup, Eruvaka Technologies. The name ‘Eruvaka’ refers to a festival that celebrates the onset of the sowing season, particularly celebrated by some coastal farmers in Andhra Pradesh.

Raavi started Eruvaka in April 2012 in Vijayawada, Andhra Pradesh, and his first product PondGuard was ready by March 2013. By October, he raised his first round of venture capital (VC) funding from Omnivore, an agri-tech-focussed early stage VC fund in Mumbai. It helped him put together a small team.

“I had zero knowledge of aquaculture prior to what happened at my uncle’s pond,” says Raavi, founder and CEO of Eruvaka. He met several farmers, and because he came from a similar background, it was easy to understand their problems and apply what he learnt from them in his product development process.

Aquaculture is a high-risk, high-reward sector, explains Raavi. It’s an industry in which India is a large exporter, especially Andhra Pradesh. Unlike farming poultry, cattle or crops—where you can see the progress or the onset of a disease or a problem—in aquaculture, “everything is under the water and there is a lot of guess work and intuition that farmers have to rely on” he adds. “What we are trying to do is provide the tools and science to eliminate that guess work… give them some peace of mind.”

PondGuard is aimed at measuring the level of dissolved oxygen in aquaculture ponds. This is a critical parameter for the growth of shrimp and fish, says Raavi. The product monitors oxygen level in real-time and sends updates to the farmers’ mobiles. When it falls below a certain level, PondGuard also sends an alert to the farmers so that they can take steps to restore the oxygen levels.

The oxygen levels can go down due to weather conditions; for example, when it is too sultry. It can also fall due to excess feeding of the shrimp, which leads to a build-up of ammonia in the pond, explains Raavi. Farmers also use aerators in the ponds, which may not work during power outages and lead to a dip in oxygen levels.

PondGuard’s sensors measure oxygen levels, and a telemetry system pushes that data to Eruvaka’s cloud servers, and then onto the farmer’s smartphone, on Eruvaka’s app PondLogs. The sensor uses light beamed onto a membrane coated with chemicals and captures the reflected light. The membrane interacts with the oxygen in the water; variations in the oxygen level cause changes in the reflected light. Eruvaka has built the technology to make this process sensitive enough to measure changes in the oxygen levels.

The value of PondGuard is enhanced by the fact that oxygen depletion often happens in the early hours of the day, between 2 am and 7 am. For now, there aren’t any sophisticated or sure ways of increasing oxygen levels. The farmers usually use chemicals such as hydrogen peroxide to try and generate some oxygen in the ponds.

Flagship Products
Eruvaka’s flagship products are PondMother, an automated feeder for shrimp, and ShrimpTalk, an Internet of Things device. Farmers need to only fill PondMother with the feed and can program it via a smartphone app to dispense it the way they want.

ShrimpTalk is a more sophisticated “hi-tech device”, says Raavi. Its name comes from the fact that it listens to the sound made by shrimps when they eat. By analysing the sound, Eruvaka’s tech is able to determine if all the feed has been consumed. If not, the farmer can delay the next feed. At the core of the tech is the ability to translate the intensity of the sound measured to the corresponding level of feed consumed. “This way, we can ensure almost zero wastage, make the pond environmentally healthy, and reduce its ammonia content,” adds Raavi.

PondMother was released in 2015, while it took four years, from 2014 to 2018, to develop ShrimpTalk as a commercial product.

In April 2018, Raavi raised $5 million in a series B round from investors, including Nutreco, a Dutch animal and aqua-feed company, and Omnivore. Eruvaka has been profitable from FY19, with revenue growing over 100 percent year-on-year since then.

The effort in developing ShrimpTalk was worth it. “It became a big market hit,” says Raavi. “I always say I was the first VC to ever do a deal in Vijayawada,” says Mark Kahn, co-founder and managing partner at Omnivore. Eruvaka has become really global and sizeable; 90 percent of its sales are from outside India, he adds. “It’s a kind of a dream of Make-In India, right? You’ve got a company that’s employing people in coastal Andhra Pradesh, with 90 percent of its products being exported to Latin America and Southeast Asia.”

Raavi has a team of 120, including engineers in mechanical, electronics and computer science. “We do everything in-house,” he says. Nutreco’s backing also helped, he adds, because it had a strong research team and deep expertise in aquaculture. The hardware is manufactured at Tangutur, about 150 km from Vijayawada. PondMother is sold as a hardware product while ShrimpTalk involves a subscription.

Alongside developing ShrimpTalk, Raavi and his team worked with shrimp farmers to understand how they grow the shrimp. This led to certain interventions from Eruvaka that increased the shrimp yield. For example, one farmer implemented a few recommendations from Eruvaka in some of his ponds as an experiment. This involved a more scientific way of determining how much feed could be given, based on Eruvaka’s measurements. The experiment yielded 50 percent more shrimp, claims Raavi.

“ShrimpTalk gives us the pulse of the pond,” says Raavi. Another important need is to estimate the volume of shrimp in a given pond. “Using our algorithms, we are able to predict this with 80 percent accuracy,” he says. This is critical because it helps farmers avoid overfeeding, and gives them a good estimate of how much money they can make once the shrimp mature.

Advisory and marketplace
Over time, Eruvaka has also developed a rich knowledge base on shrimp farming with valuable nuggets of information; for instance, shrimp eat nearly 60 percent less when there is a cyclone. “We were decoding a lot of what was happening under water and doing away with the guess work. We have embedded this knowledge into our algorithms,” says Raavi. “Today, there is a lot of mutual trust between the farmers and us, which is the strength of the company.”

Raavi has customers also in Latin America, his largest market region, including Ecuador, Peru and Mexico. Eruvaka entered Latin America in 2018. In India, Andhra Pradesh is his biggest market, which provides about three-quarters of the shrimp produced in the country. Globally, this industry is worth some $20 billion and India accounts for 20 to 25 percent of it.

Tweets by @forbesindia
Novavax may come to India; Windows 11 leaks; Apna raises $70 M; and Piyush Shah of Glance InMobi discusses the Shop101 acquisition
Twitter may soon let you choose who mentions you