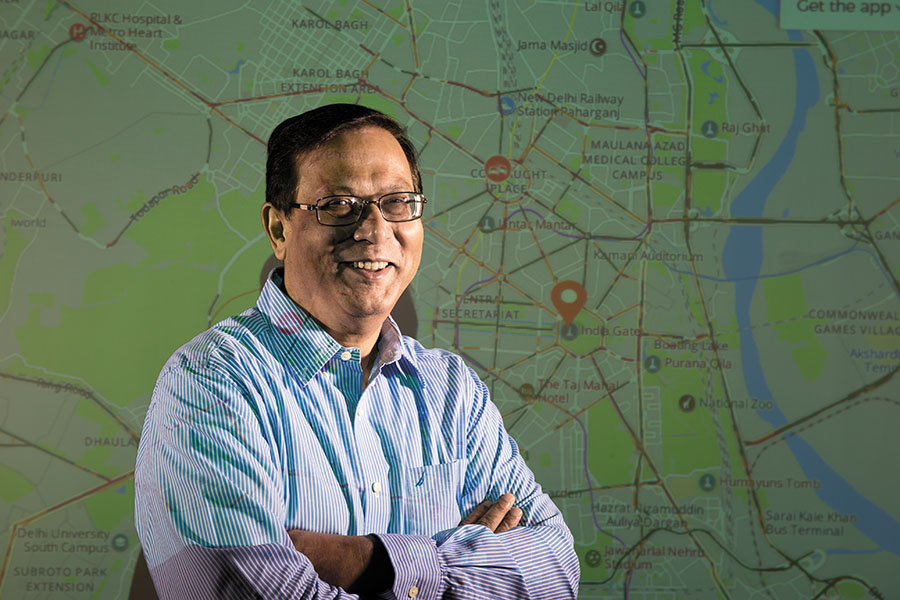 Rakesh Verma admits that Google is a dominant player but does not feel it is better than MapmyIndia
Image: Amit Verma

A long-drawn battle for supremacy is under way in India’s online navigation space and the country’s oldest mapmaker, MapmyIndia, is busy readying its war chest to slug it out.

MapmyIndia, owned by CE Info Systems that was founded by the husband-wife duo of Rakesh and Rashmi Verma in 1995, is plotting strategies to take on the growing dominance of Google Maps in India as smartphones and data become cheaper by the day. Already, over the past few months, the company has begun to roll out initiatives—like a revamped app and digital addresses for properties across the country—that the company hopes will help restore its lost ground.

Over the past few years, maps and navigation devices have become wildly popular as consumers turn to them for travel, local search features and daily commute. For companies too, maps provide a revenue opportunity as businesses flock to pin their locations while ecommerce companies need them to identify remote locations for deliveries as well as areas of growth. Even the government needs maps in its attempt to roll out projects. Estimates peg the Indian location-based services to be worth over $310 million in 2017 from $7 million seven years ago.

For long, MapmyIndia, the Delhi-headquartered company, had relied on its B2B business to drive growth. It now controls over 80 percent of the automobile map space. MapmyIndia’s maps often come pre-loaded in vehicles, including Hyundai and Jaguar, and also offer the back-end technology for ride-sharing apps, including Ola. While it has been fairly successful on that front, with annual revenues clocking ₹200 crore, the company is aiming for more.

“I would say a new thinking has come about,” Rakesh, chairman and managing director of MapmyIndia, tells Forbes India. “We said we want to ultimately go to the consumer. When we started, it was meant for customers, then we went through the B2B business route since the focus was on revenue. We have 80 percent of business in automobiles, and the future looks good since we have long-term contracts. Our core strength is building the best quality maps. But now, we want to focus on the consumer more.”

In February, the company launched a new app to take its maps directly to consumers. The maps, Rakesh reckons, are “better than whoever”. With Google Maps, the company’s core competitor now readying plans for its B2B segment, Rakesh says he is ready to slug it out. “They (Google Maps) had encroached our space, we are saying we will get back. Now we are planning our full foray into the consumer space.”

Google did not respond to Forbes India queries till the time of going to print.

A long journey
Before they launched MapmyIndia, the Vermas spent a considerable time in the US from where they picked up the idea of digital maps from a local stall. Soon, Rakesh flew down to New York to strike a deal with MapInfo, the company that developed the digital maps, and struck a deal with it to distribute its software in India and build maps using it.

In 1995, as Coca-Cola set out its plan to enter India, MapmyIndia helped the company with mapping towns and cities across the country. Since then, MapmyIndia has built up a steady consumer base of enterprise clients and automobiles, while investing over ₹200 crore on technology to develop 3D data visualisations, telematics, and navigation systems. In 2007, the company also launched the MapmyIndia Navigator, a GPS-enabled in-car navigation device that soon paved the way for providing large-scale enterprise solutions for automobiles.

Yet, despite all its success in the B2B category, it had lost out significantly in taking its business to the consumers directly. That was also partly due to the phenomenal success of Google Maps and Apple Maps, which often come pre-loaded in phones.

“Ideally, they should have come into play a few years ago,” says Sanchit Vir Gogia, founder and CEO of Greyhound Research, a research and advisory firm. “They have not been aggressive enough and have lost their first-mover advantage.”

Rakesh agrees they lost out much in the past few years, particularly when smartphones and data became cheaper. “We were weak and over a period of five years, we have gone away from people,” he says. “We didn’t know how to get into that space. We have figured that now.”

New Thought
The new thinking at the MapmyIndia headquarters includes an aggressive marketing campaign. But, before that, Rakesh and his team are working on offering a seamless experience with their newly-launched app. “We are pinning our hopes on the fact that we can offer an experience that the others can’t. We know India better than anybody else,” he says. And, despite Google, which is armed with heavy pockets, MapmyIndia is ready to take on the challenge.

“You have Flipkart and Amazon in India. The same concept applies here. We are a natural claimant to the maps space. But we have to go with a good product. We have figured technology-wise and otherwise what Google cannot offer. We looked at the pain points, and that’s what we have fixed. Let people also figure where we are better,” says the 67-year-old Rakesh.

At the same time, MapmyIndia has also built a tool that could pose some difficulty for Google. Over the past few years, the company has begun to provide e-locations (eLoc) to digitally map physical property and addresses. That means, many properties in the country are given a six-digit code, and upon entering the eLoc, the map identifies the best route to that building. “Unless somebody can physically map all this, it will be a big entry barrier,” says Rakesh.

The addresses have already managed to create a database of over 2 crore such properties across some 7,000 towns and 6 lakh villages in rural India. “So you can just put the eLoc in your cab and it will take you to that location,” adds Rakesh, who acknowledges, though, that it will be a huge challenge to get the idea across to the people.

That’s why he is all set to spend more aggressively on marketing the company’s maps and reach out to more consumers. “We want to spend on the marketing campaigns,” he says. “The market is evolved, and the consumers know what they want. While the product is getting more meaningful, we will ensure that we have better reach.”

MapmyIndia’s edge over its rivals also comes from its ability to map remote areas of the country, having ramped up its ground coverage, going lane by lane across cities and villages. “They certainly have the accuracy and a good product at hand,” says Gogia of Greyhound. “What also works is that the company has an Indian face. That’s a huge advantage with government projects as maps are sensitive entities.”

Mapping the future
Meanwhile, apart from the eLocs and consumer play, the company has also begun to aggressively build up more business. It sold a stake to Flipkart recently, although it didn’t disclose the numbers. The other investors include Qualcomm and Zenrin. In all, investors have put in over $30 million in the company so far.

The company also tied up with The Weather Company (TWC), owned by IBM, to jointly offer users across sectors such as agriculture, automotive and logistics hyper-local weather information that would help them plan activities better and insure against weather-related eventualities.


That’s not all. In an unprecedented move, MapmyIndia has also joined two-wheeler companies to offer location and navigation technology in the vehicles. In the four-wheeler segment, Rakesh pins his hopes on car companies soon rolling out vehicles that will have internet available on them to provide real-time data.

“For a consumer, it’s all about the data use and companies are interested in the data that is sent back,” Gogia says. “However, when it comes to ecommerce companies or others, it’s about ramping up a presence across the vast terrains of India. That’s where MapmyIndia has a definite role since they know the country very well. Perhaps, they need to become more aggressive in building the brand.”

Rakesh and his team are also hoping that Prime Minister Narendra Modi’s Make in India programme will stimulate their next phase of growth. “We have two advantages here. One is our products are made in India and we provide employment here,” he says. “The second advantage is that we don’t have to share our data back to California. So we aren’t a threat.”

But how does he compare MapmyIndia’s technology with Google? “Are they better than us? I don’t think so,” says Rakesh. “They are a dominant player. We have very good technology here. We aren’t getting a level-playing field here and if the government is serious about building big companies in India, it must ensure that.”

But government help or not, Rakesh is gearing up for the battle. And he is confident he’ll have the last laugh.

Tweets by @forbesindia
Can consumers be saved from their misguided decisions?
Thumby Aviation: A leap of mobility