Thumby Aviation: A leap of mobility

With its city-to-airport helicopter shuttle service in Bengaluru, the startup is giving a new meaning to taxi hailing 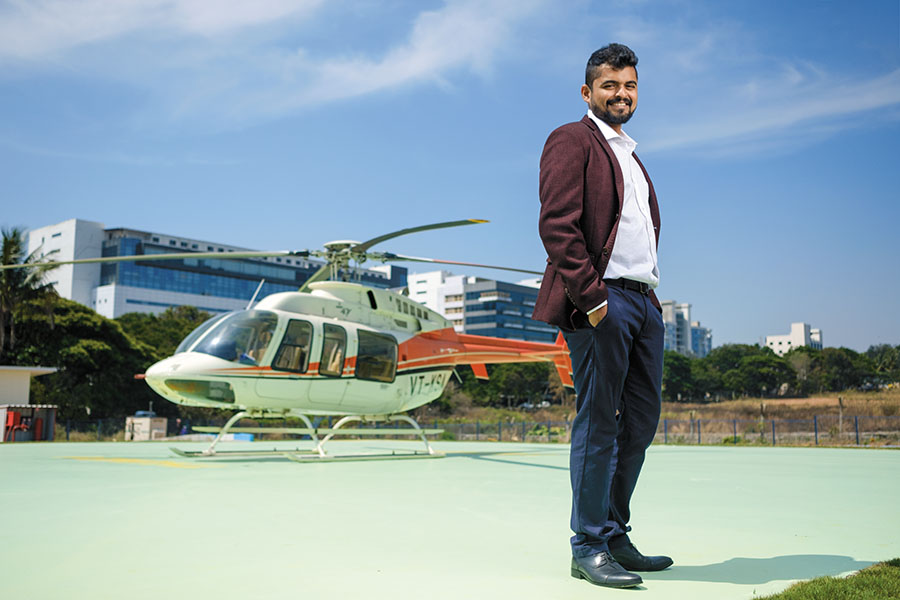 Govind Nair, head of business development at Thumby Aviation. He plans to expand the heli-taxi service to other Indian cities like Mumbai and Delhi
Image: Nishant Ratnakar for Forbes India

A few years ago, Govind Nair, then a sales consultant with the personal care products maker Colgate-Palmolive, was caught in the egregious traffic snarl that India’s Silicon Valley, Bengaluru, has become infamous for. He had thought little of the problem that day and underestimated the commute time to the airport from Electronic City, an IT hub.

As his chances of making it to the airport on time dimmed, a distressed Govind dialled his father KNG Nair and informed him of his misery. In jest, he added that Nair, who operated the Kerala-based helicopter charter service company Thumby Aviation Private Ltd, should send a chopper to airlift him. While the plea didn’t quite yield results, and Govind missed his flight, the wearying experience gave the father-son duo the germ of a business idea.

The idea took wings on March 6 this year as Thumby Aviation’s (and also India’s) maiden heli-taxi took off from Electronic City and landed at the helipad in Kempegowda International Airport (KIAL), flying over serpentine snarls and covering the 65 kilometre distance in under 30 minutes.

The company’s heli-taxi service is now a daily affair. It currently shuttles just one helicopter, a US-made six-seater Bell 407, with services being offered every half hour during two shifts: The first one between 6 am and 9.30 am and the second between 3.30 pm and 6 pm. A one-way seat on the chopper costs ₹3,500, excluding the 18 percent goods and services tax.

“It costs anywhere between ₹1,500 and ₹2,500 to hire a cab between Electronic City and the airport,” Govind, 29, tells Forbes India. “If you choose the luxury cabs offered by Uber or Ola, it costs even more. Cabs booked from hotels cost ₹3,500. So we have priced it reasonably and it takes less than half-an-hour, compared with two hours by road.”

For now, the bookings are being made through the in-house app HeliTaxii available for Android and iOS devices and the company is offering discounted fares for corporate bookings. The app has been downloaded over 13,000 times and so far, the response has been positive: Thumby Aviation flew over 90 people in the first two weeks. “We are operating the services [only] during peak hours now. Eventually, we want to take up more services and deploy bigger helicopters,” says Govind.

Thumby Aviation is the brainchild of KNG Nair. In 1998, shortly after quitting as a Group Captain in the Indian Air Force, where he had clocked over 13,500 hours of flying, KNG Nair joined the private sector. He began by flying helicopters for companies engaged in offshore oil drilling.

By 2004, Nair founded King Rotors & Air Charter Pvt Ltd while working with private companies such as Global Vectra as their chief pilot. King Rotors mainly focussed on private contracts, particularly from travel and tourism and the offshore sector. Nair floated the Thiruvananthapuram-based Thumby Aviation in 2009, with a specific focus on flying choppers over the often-inaccessible terrain of India’s northeastern states.

Thumby (Malayalam for dragonfly) soon expanded to Telangana, Karnataka and Chhattisgarh, finding clients in police, corporates and political parties who hired the services during election campaigns. By 2015, it emerged as one of the most formidable helicopter charter companies in India. “But, it was over the past 2-3 years that we decided to scale up and started exploring the commercial space,” says Govind, who is now head of business development at Thumby Aviation.

Soon after his ordeal of commuting from Electronic City to the airport, the company had set in process a plan to explore the opportunity in heli-taxi services. Employees spent almost a year interviewing people and researching, to assess the potential for a heli-taxi service in Bengaluru.

“We found that on an average, people spent over two hours to reach the airport and there are over 60,000 people who use the airport a day,” says Govind. Around the same time, the company was also offering joyrides on their helicopters in Hyderabad for ₹3,500 and it had found many takers.
“That’s when we realised we have a pain point which can be easily fixed,” says Govind. “For a long time, we had focussed only on the business-to-business segment. Now we want to scale up the business to the consumer space too.”

So far, Govind says the customers of the heli-taxi can be categorised into two groups—families, or those travelling to catch a flight or to receive someone at the airport, and corporates along with a fair share of foreigners.

Circumventing road traffic by flying over it has already been successfully implemented in Brazil and Indonesia, though it is a new concept in India, which currently has just about 284 helicopters being used in civil aviation. The American multinational conglomerate Honeywell has suggested that demand from Asia’s third-largest economy for helicopters isn’t expected to rise significantly.

This is in sharp contrast to the country’s aviation sector as a whole, which is buzzing with activity. India is one of the fastest growing aviation markets in the world with the domestic sector growing over 17 percent annually and requiring over 1,600 aircraft in the next 20 years, compared with nearly 500 aircraft currently, according to aircraft maker Airbus.

So, will India’s new-found love for flying spill over to heli-taxis services? “Heli-taxis as a concept isn’t something new. They have existed from the 1950s in the US,” says Mark Martin, founder of Dubai-based Martin Consulting. “But in India, I see this having a huge potential and catching on like wildfire. That’s because each mode of transportation serves a purpose and here the purpose is to save time. It’s not that helicopters are uber luxurious. But if it [heli-taxi] can beat the traffic and save so much time, it is worth it. I would think this has a potential across India.”

Meanwhile, Thumby Aviation, a zero-debt company with an authorised share capital of ₹5 crore and owned by KNG Nair and his wife, has set its ambitions fairly high. Over the next few months, the company wants to increase its network in Bengaluru and also begin operations at night, while also connecting more helipads. Post that, the company also wants to begin services in other Indian cities, including New Delhi and Mumbai.

Alongside, it is also initiating talks with airlines and online travel agencies for a possible tie-up. “We have expanded our business mostly on profit accruals,” says Govind. “Now we see a big potential in the business, particularly with the response we have received so far. We want to go pan-India soon.” Clearly, he has a bird’s eye view of the future.