The first-standard student and gamer, VivOne is being approached by brands every day. Here's a peek into the life of the young gamer 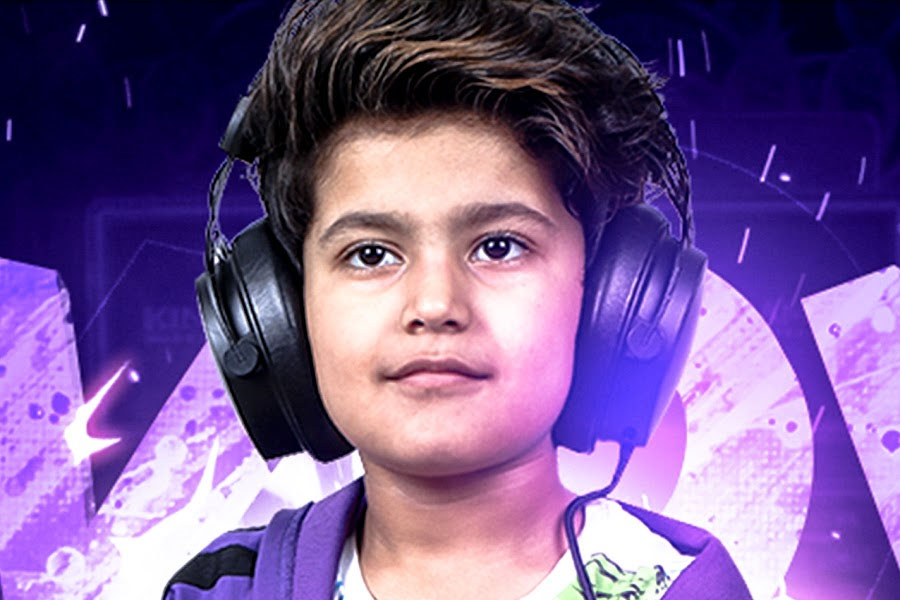 Aged seven, Akarsh Chaudhary aka Vivone, is one of the youngest online gamers in India.

At seven, which game did you play? Ludo or hide-and-seek, perhaps? And what did you get in return if you won? Maybe a chocolate bar or candy floss? If you're a 90s kid, this must be relatable. But this is 2022—the games have changed, and so have the rewards.
Akarsh Chaudhary aka Vivone, is one of the youngest online gamers in India. He is offered up to a lakh for two to three video collaborations of his gaming content. A seven-year-old from Mumbai, Vivone has a schedule like every other kid in his neighborhood that includes homework, meeting friends, and swimming lessons. But, what is different about his day is the three hours every afternoon he spends gaming online. He plays BGMI, Valorant, Call of Duty: Warzone, CODM, Pokémon UNITE and others, and also streams his content on YouTube and gaming streaming platform, Rooter.

Vivone has 56.3K followers on Instagram, 3.73 lakh subscribers on YouTube, and 22,000 followers on Rooter.
His father, Vivek Chaudhary, is focusing on sharpening Vivone’s skills and not looking for monetisation options at the moment. Chaudhary senior who used to play video games himself, says he wants Vivone to set an example of how online gaming can become a career and how like every other traditional athlete an online gamer can also represent their country at international tournaments.

Getting brand attention and life lessons

Chaudhary and Vivone’s new streaming platform partner Rooter is however, flooded with offers. From gadget brands to fantasy apps and even some FMCG brands are willing to offer up to rupees one lakh for a video collaboration. What do they get in return? Reach, access, attention, and rub-off from the influencer to the brand.
Some of the streaming videos on YouTube have touched 24 lakh views making Vivone a brand favorite in the segment. Content creators with a follower base like Vivone's can earn up to rupees five lakh a month from just streaming.
Read more: Much more than a game: How social media is changing the sports experience
But is all of this too overwhelming for a seven-year-old? For Vivone it isn’t, the family tells us. His parents think that balance is the most important factor and once someone perfects that there is no need to worry.
“Vivone does game streaming for three hours in a day. This has been his routine since he was five. He knows he cannot game for more than that and has other activities to look forward to. It is important for gamers too, to have other hobbies, so that they are not consumed with their gaming gadgets all day,” says his father.
Vivone also seems to be picking up life lessons from gaming.
His father tells us that it has taught Vivone to deal with down phases: “He is realising that that you win some and you lose some.”

Balancing is an important parameter. According to ‘Science, translated’, a science-based international publication, the term “problematic gamers” was coined to describe those who habitually spend long hours playing video games.
While the piece titled, ‘The effects of video games on children’s mental health and psychosocial behavior’, talks about the problems of excessive gaming, it also focuses on the possibility of positive effects on an individual’s psychosocial well-being. It highlights how a lot of games can boost the psychosocial development of a child by promoting interaction, confidence and also the ability to deal with failure.
While Vivone is living every child’s dream of dedicated screen time and gaming hours, he is being flooded with offers from esports organisations to be a streaming partner.
The kid, however, is untouched by the burden of monetisation. He just enjoys playing his games and his cute comments while streaming add that extra touch, making the content popular among fans and brands.

Esports is exactly how sports was looked at 20 years ago, says Piyush Kumar, founder and CEO at game streaming platform Rooter. “Two decades back, people were always skeptical about dedicated practice hours because that would hamper their focus on career plans but then the whole sports scene changed when the market for sports opened up. IPL came in and so did other opportunities. Esports will not take 20 years to change the way people think,” he says.
Read more: Fantasy sports industry in India is booming: Key numbers
According to Kumar, in a couple of years, players will make the country proud internationally and it will become a sought after career,” he says.
But there are challenges. Gaming and video games in general are still seen as recreational and too much of it is seen as detrimental, especially for young players and children. However, things are changing with initiatives to organise and new regulations being ushered in.
Read more: Urgent need to look at esports from a different lens: JetSynthesys' Rajan Navani
Gaming is a state subject and various stakeholder bodies are trying to have the industry regularised centrally to bring about uniformity. That apart, there is already a set of guidelines that gaming companies have to follow while pushing out marketing communications.
As Vivone signs off, we ask him what his favourite games are. "Valorant and BGMI are my favourite games,” he says. And what does he want to be when he grows up? Spoiler alert— a professional gamer. He tells Storyboard18, “I want to be known internationally and my parents tell me in another twelve years when I’m sixteen, I can represent India at global tournaments."

Tweets by @forbesindia
Cristiano Ronaldo to drive football fans into Web3 with Binance partnership
More than other generations, Gen Z believe they'll be rich one day