Can Voltas keep its cool?

Voltas posted its highest market share in air conditioners in June, weathering rough conditions. The big ask now is to replicate that success in its white goods segment, Voltas Beko, and become a brand for all seasons 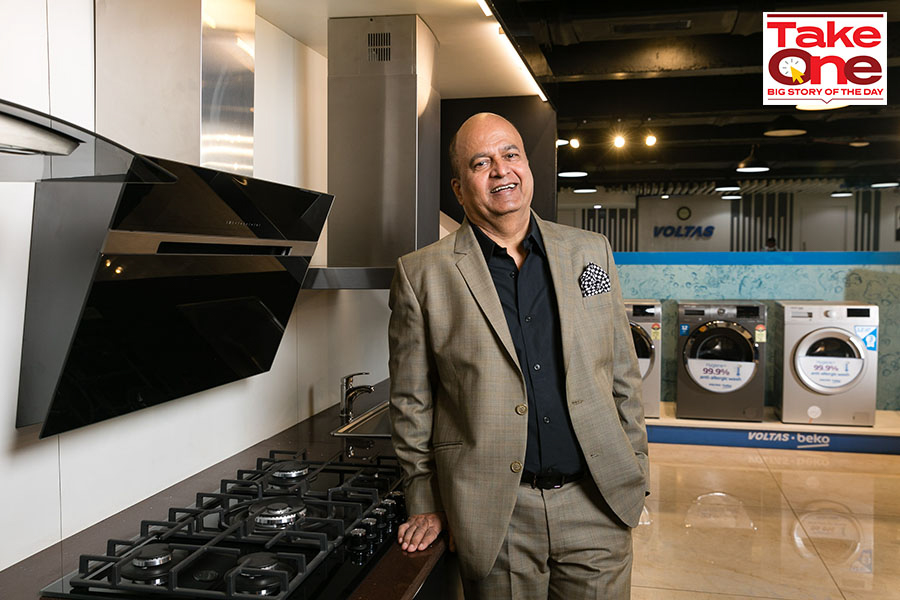 Pradeep Bakshi, MD and CEO of Voltas, is banking on the historic grit of the brand.
Photo: Madhu Kapparath “It was quite a turbulent phase for Voltas,” recalls Pradeep Bakshi, managing director and chief executive officer of Voltas, alluding to the period between 1993 and 2005. Bakshi, who joined the Tata-owned company in November 2001, recounts the horror story during the ‘second phase’ in the history of the 66-year-old firm. The company struggled, lost market share, and accumulated losses during 12 years starting 1993. In the early 2000s, it exited the business of refrigerators, washing machines and white goods. Though revenue increased from Rs811 crore in FY95 to Rs1,119 crore in five years, PAT (profit after tax) slipped from Rs22 crore to Rs5.5 crore during the same period. The heat was on. The devastating part, though, was that Voltas was fast losing the plot in the core business of air conditioners (AC). From a market share of over 40 percent in the early 90s, it slipped to sixth or seventh in the pecking order in 2000. First dethroned by American brand Carrier in the early 90s, the Indian company was subsequently aggressively pushed down by South Korean rivals LG and Samsung. “Voltas lost its leadership position,” rues Bakshi. A bunch of deep-pocketed multinationals, he points out, was able to buy market share at Voltas’s expense. Cut to April 2020. Voltas was entering the new fiscal with a massive tailwind. In spite of a muted consumer durable market and overall slowdown last year, the company managed to increase its revenues by 8 percent; in ACs, it was galloping at a staggering pace of 52 percent; in fact, in it, the company managed to sell over 2.5 lakh units in some months; overall, it was chasing a realistic target of touching the two-million mark. Then came the pandemic, and subsequent lockdown towards the end of March, which spoilt the party. “March, April and May contribute to almost 50 percent of our business,” says Bakshi. Summer, he lets on, got wiped out. In fact, 50 to 60 percent of the business for the AC industry comes between March and June.

But June and the months that followed brought a lot of cheer. Voltas posted its highest market share in ACs in June, at 26.9 percent; it ended the first quarter (March-June) of FY21 with a 26.2 percent share, which climbed a tad to 26.6 percent in the July-September period. “Strong performance of the air conditioner franchise in a challenging macro environment was the highlight of this quarter,” underlined Goldman Sachs in its research report early this month. Performance in the white goods segment, which Voltas re-entered by inking a joint venture—Voltas Beko with Turkey’s Arcelik in 2017—was also encouraging. In refrigerators, it increased its market share from 1.3 percent in FY20 to 1.7 percent at the end of the second quarter of FY21. In washing machines, too, it inched from 1.3 percent to 1.4 percent during the same period. In dishwashers, it sold over 20,000 units in the first six months of this fiscal compared to 400 units during the same period last year. In air coolers, it extended its share from 9.7 percent in FY20 to 10.8 percent by the end of the second quarter. “In the first half of this fiscal, we were two times the No 2 rival, LG, and sold more than three times the other brands,” claims Bakshi. This underlines the resilience of the brand and the team. “We have always bounced back.” 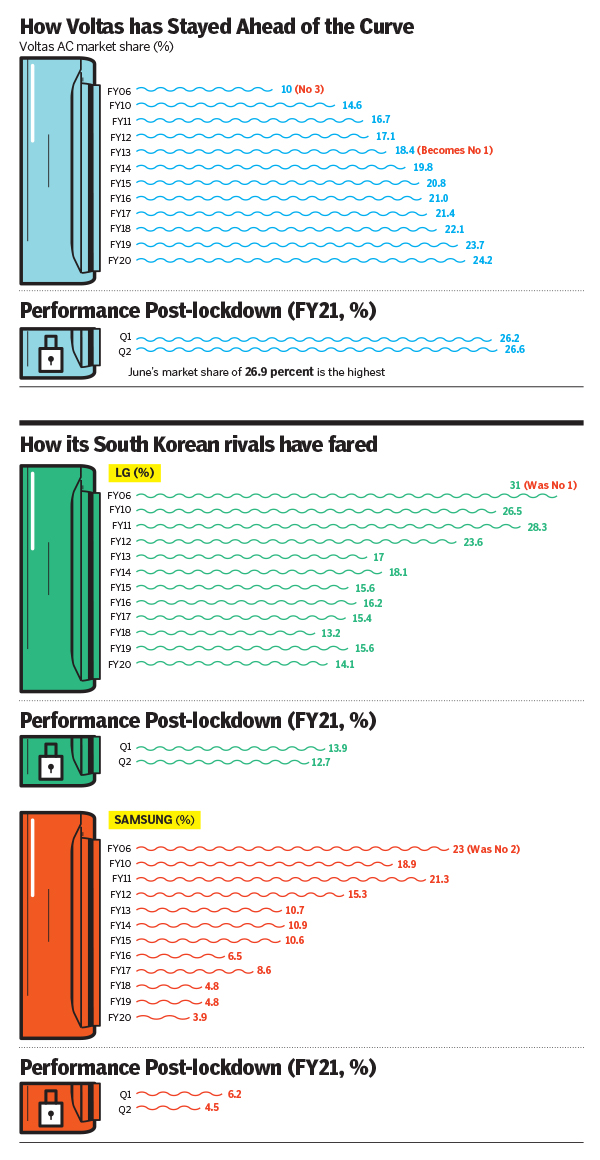 Ask Bakshi, who was appointed MD and CEO in October 2017, the magic mantra, and he swears by one factor. “We kept our cool,” he smiles. Whether it was the turbulent phase of the 90s, or coming from behind and reclaiming the AC throne in 2013 or now re-entering the white goods segment and quickly ramping up market share in fridges and washing machines—a segment now dominated by the same old rivals LG and Samsung—the brand has always stayed the course. “We have not only attained leadership but we have sustained it,” he says. “That's a big task.”   The big ask now is to replicate the success in ACs in the Voltas Beko JV. Bakshi sounds confident. “We will make our mark in this category as well,” he says. Conceding that competition is way ahead in the white goods category, Bakshi is banking on the historic grit of the brand. “I am confident we will emerge as one of the leaders.”

Voltas, reckon marketing experts, stands a bright chance of making a dent in the white goods segment. In spite of entering the game quite late, it has a good sense of this segment, and the needs of consumers, largely because of its history. “In fact, being a late mover gives it an edge,” says Ashita Aggrawal, marketing professor at SP Jain Institute of Management and Research. She explains. When all the players in the washing machine segment are moving towards fully automatic versions—which makes up 35 percent of the market—Voltas Beko is putting its eggs in both baskets: Semi- and fully-automatic. Reason: Semi-automatic is what introduces most of the middle class to the concept of washing machines. Similarly, introduction of countertop dishwashers makes sense as Indian kitchens do not have inbuilt spaces for huge dishwashers. “Being an Indian brand, it knows the pulse of the Indian buyers,” she says, pointing out another example. When the Korean and American players were exiting the window AC segment, or focusing heavily on split ACs, Voltas kept its game intact in the former, which is still the preferred mode in North India. “That again came from an understanding about the structure of houses in North India,” she adds. 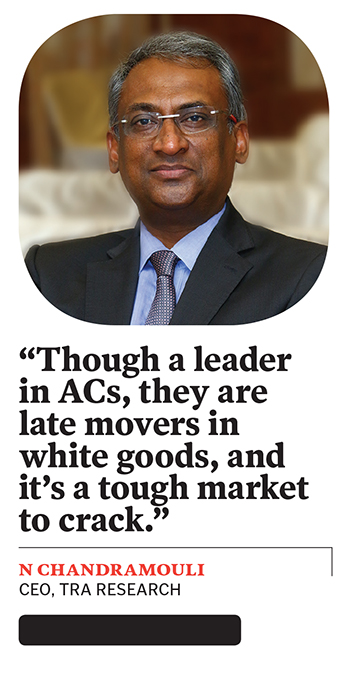 Keeping a close tab on the pulse of the consumers, and positioning itself as an Indian brand, helped Voltas come back into the AC game from 2006 onwards. In that year, Voltas had a 10 percent market share. LG and Samsung, during the same period, had 31 and 23 percent, respectively. The fight began by trying to understand the psyche of the Indian buyers, and the first play was emotional. “India ka dil, India ka AC’ was the positioning taken by the brand in 2006. The television (TV) commercial shows a young village girl, who locks cold air from an AC into a glass bottle and takes it to the field where her father is working. The father-daughter relationship works, and the brand makes the most of the emotional connect. “It's an Indian brand to the core. Trust, reliability, and durability are inherent in the brand,” says Deba Ghoshal, vice president and head of marketing at Voltas.   The next priority was to highlight the functional aspect. Voltas took the lead in talking about energy efficiency by rolling out star-rated ACs. After a few years, post 2010, came all-weather ACs. Then came adjustable ACs. “We created stories around technology, which were accepted from a consumer perspective,” says Ghoshal, alluding to the popular brand mascot of Murthy, who stayed with the brand for almost seven years. With Voltas Beko, he underscores, Voltas has transformed from a brand for one season to a brand for all seasons. “And for all reasons,” he adds.
The going, though, might not be easy, and grabbing sizeable market share may take years. For two reasons: First, old rivals LG and Samsung are deeply entrenched. Add to that the aggression from other players such as Lloyd and Kelvinator. Lloyd, especially after the buyout by Havells, has become hyper-aggressive in not only the AC segment but also in the white goods space, with washing machines and refrigerators. “It is still a long way for Voltas,” says N Chandramouli, chief executive officer of TRA Research, a Mumbai-based marketing and branding agency. In ACs, he points out, Voltas has had the advantage of a head start, and focussed firepower, without having to diffuse energy and resources to other white-goods products. Spreading itself wide, and thin, might take a toll on its focus. Take, for instance, LG and Samsung, which have lost their dominant positions in ACs. While LG’s play in smartphones bombed, Samsung has struggled to keep its low single-digit share in ACs intact. Can Voltas keep its focus intact in all the segments? Bakshi, for his part, is betting big on the cool quotient of the brand and his team. “So far we have done well in the new categories,” he says. “This is something which keeps me cool.”

Tweets by @forbes_india
Amitt Sharma:Tech prodigy turned trend setter in digital advertising
A Man Who Leads By Example in All Spheres: Mario Schmidt