Dawn of 2023: A cautious world economy

The global economy finds itself in choppy waters with new Covid variants, ongoing geopolitical tensions and the fear of recession. Analysts say India is relatively stronger in comparison to other large economies 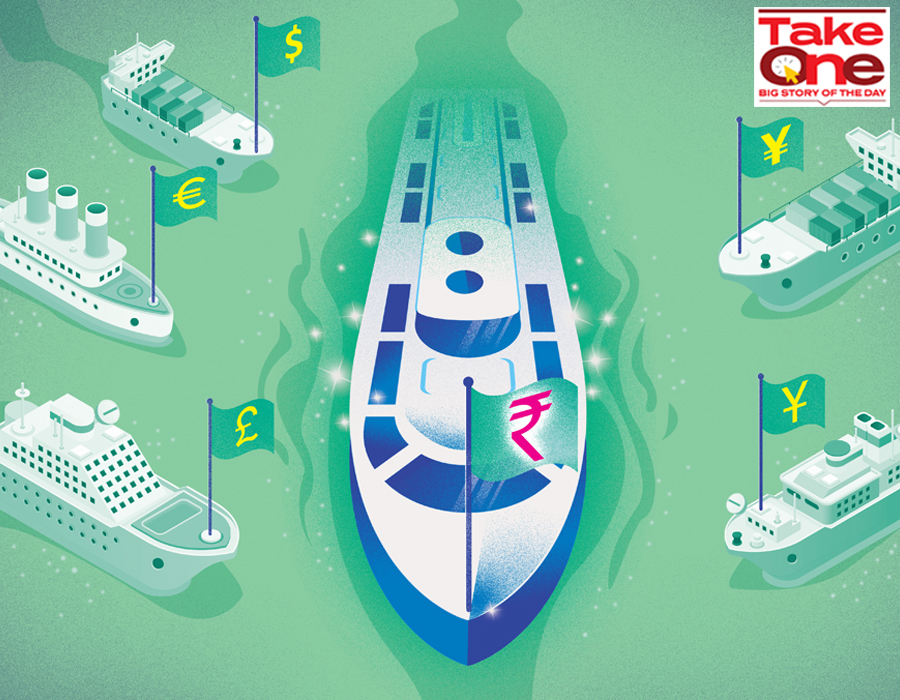 As we prepare to welcome the New Year, the global economy finds itself in choppy waters: a third of the world is fending off recession while battling high inflation, and the Chinese economy is on a slide. Illustration by: Chaitanya Dinesh Surpur

A lot has changed over the past one year, and yet so much remains unchanged. Take the degree of volatility and uncertainty as examples. We ushered in 2022 amidst a worrying wave of rising Omicron infections. The chatter around financial tightening grew louder as the US Federal Reserve stared at record-high inflation levels. The first couple of months threw the world in chaos as the military conflict in Ukraine intensified.

As we prepare to welcome the New Year, the global economy finds itself in choppy waters: New Covid variants pose fresh concerns for governments, geopolitical tensions have not eased, a third of the world is fending off recession while battling high inflation, and the Chinese economy is on a slide.

Fitch Ratings, in line with many global banks, cut its world growth outlook to 1.4 percent for 2023 from 1.7 percent in its previous forecast in September. Its chief economist, Brian Coulton, says taming inflation is proving to be more challenging. “Central bankers are having to take the gloves off. That won’t be good for growth,” he explains.
Russia’s invasion of Ukraine has stoked inflationary concerns as supply chain disruptions remain a threat. Food and energy prices are likely to be volatile even as interest rates in most parts of the world are on the rise. The International Monetary Fund believes the worst of the economic pain is yet to come. 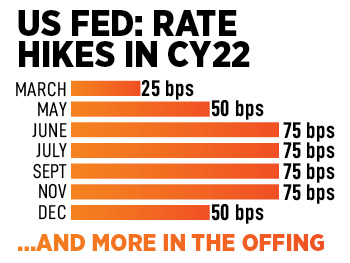 After its last rate hike in December 2018, the US Federal Reserve raised rates by 4.25 percent in 2022 to cool off inflation (see table). Inflation has come down to around 7 percent but the battle is far from over. Federal Reserve Chair Jerome Powell and Fed policymakers have been clear about the need to stamp out inflation even at the cost of plunging the US economy into a downturn, suggesting that the rates will be "higher-for-longer”. 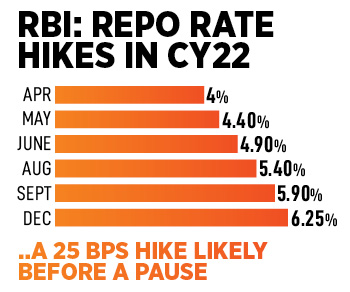 Rate hikes in the US have a far-reaching impact worldwide. Most central banks have taken measures to suck out the unprecedented liquidity of the earlier years. The Bank of Japan’s move to widen the 10-year bond yield to move 50 basis points versus the previous 25 basis points band jolted global equity and debt markets, and roiled investor sentiment. Most indices ended the trading session in the red.
“The surprise move by the Bank of Japan has caused higher volatility in other countries’ bond markets. The Bank of Japan may create higher volatility in overseas financial and capital markets, and Bank of Japan’s policymakers’ take would be important to keep an eye on,” says Madhavi Arora, lead economist at Emkay Global. 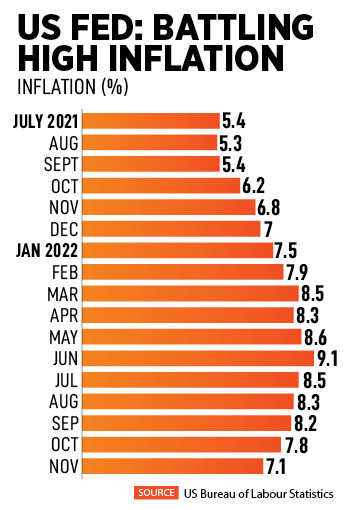 In December, Fitch decreased its China growth forecast for 2023 to 4.1 percent from 4.5 percent. The surge in Covid cases in the country has alarmed the world. Many companies are facing production issues due to the ensuing lockdowns in the region and margins are under pressure.
Other than a weakening economy, further hurt by the collapse of its property market and regulatory crackdowns of technology companies, China is also keeping the world on the edge with its shift towards Mao-era policies of controlling the economy and its rising hostility towards Taiwan is causing geopolitical concerns.
“As a growth engine, China is clearly weakening and I think that will have an impact on the rest of the world,” says Sonal Varma, MD and chief economist, India and Asia ex-Japan at Nomura. 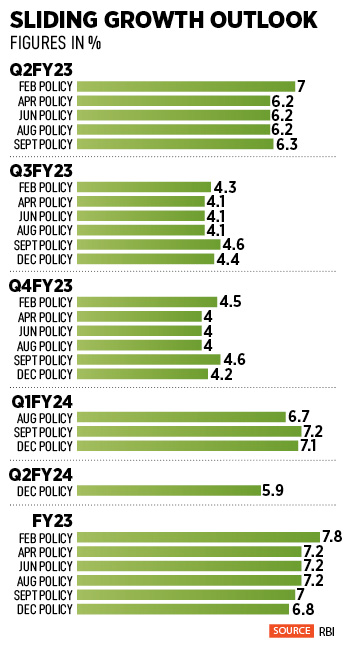 Over the past few weeks, most global agencies have revised their growth outlook for India with marginal cuts in GDP estimates for 2023. Despite the downgrades, India is expected to grow between 6.5 percent and 6.9 percent in FY23, which is relatively stronger in comparison to other large economies and its emerging market peers. In its latest credit policy meeting in December, India’s central bank reduced its growth forecast for FY23 to 6.8 percent from its earlier estimate of 7.8 percent in its February policy.
However, the economy is not on the growth track yet and inflation is expected to remain beyond the Reserve Bank of India’s 4 percent target in the next calendar year.
Motilal Oswal Financial Services’ research head Gautam Duggad says this year, markets witnessed the sharpest interest rate hikes by global central banks in the past four decades. “It was captivating to see the tug-of-war between central banks and financial markets, with the latter shrugging off the former’s actions. We believe that growth concerns will emerge across the world, including India, in CY23/FY24, limiting rate hikes and reversing the current narrative,” Duggad adds. 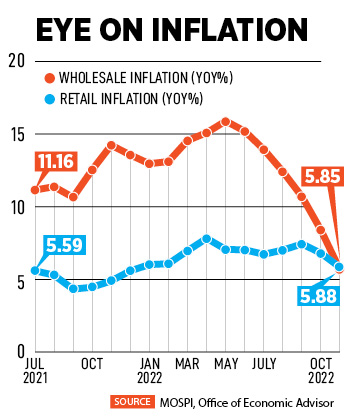 Nomura’s economists have cautioned that India’s growth rate cycle has peaked and a broad-based slowdown is underway. The foreign brokerage firm expects GDP to decline from 6.8 percent in 2022 to 4.7 percent next year.
Bank of America says India is likely to be more resilient to a recession in the US. Its analyses of the past three US recessionary cycles over the last three decades suggests that India’s GDP growth contracts lesser at -190 basis points versus -280 basis points for the US. Its research indicates that Indian markets deliver higher returns than the US a year after the recession.
“Economic growth contraction is less protracted for India at one to three quarters versus two to seven quarters for the US, and India recovers faster in two to three quarters versus three to eight quarters for the US,” its analysts say.