The makers of Ludo Star crossed $100 million in lifetime revenue last November. The bootstrapped company claims to be profitable from the first year of inception, and it is currently beta-testing two games in the word and board games categories 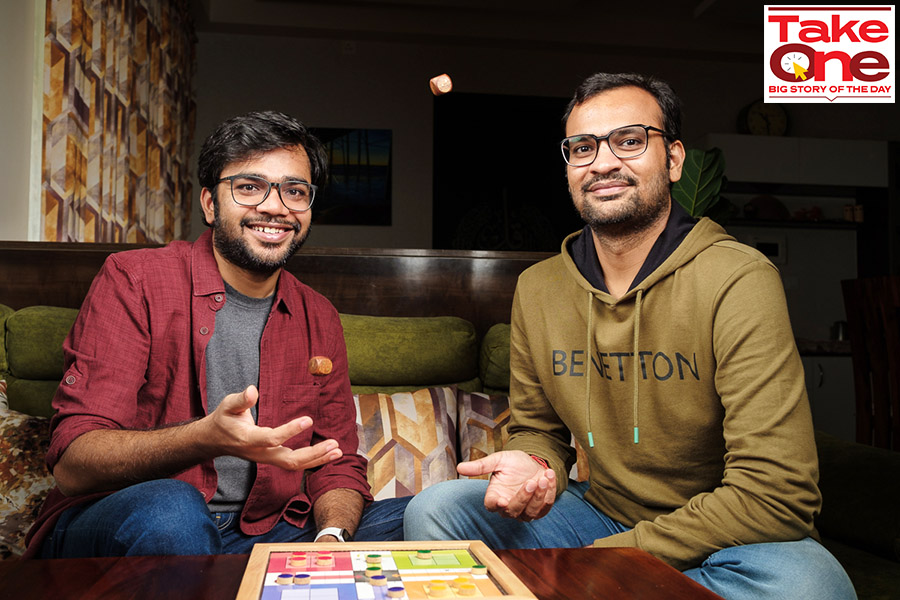 When Sanjiv Mehta, 57, a government employee, reached the peak of boredom during the first phase of the lockdown in 2020, he unknowingly got into an addictive recreation activity—playing Ludo Star on his mobile. The online version of his favourite childhood game was not only a great stress buster but also helped his family spend quality time together. “During the lockdown, passing time, especially during afternoons, was proving to be incredibly difficult. Online Ludo was a blessing for my family and me. We would not even realise that we’ve spent hours playing the game,” he says.

From the time of Mahabharata to date, the game of dice has brought families and friends together, and been a preferred pastime for many. Banking on this, Gameberry Labs, the makers of Ludo Star, headquartered in Bengaluru, and helmed by IIT graduates Afsar Ahmad and Govind Agarwal, started its journey into the world of mobile gaming. “From the time we were studying at IIT-Kharagpur, Govind and I had a shared passion to build great mobile games… games that people would love to grow old with. Games that were simple but deep enough to keep players engaged,” says Ahmad, co-founder.

Gameberry Labs started operations in 2017 by launching Ludo Star. Ahmad and Agarwal witnessed the growing craze for Ludo in the country and saw it as an opportunity to make their mark. “We quit our jobs and started developing the game. We wanted to bring classic board games to mobiles with a rich social experience layer that helped friends and family connect, even if people were miles apart,” says Ahmad, who along with Agarwal worked at Moonfrog Labs before starting Gameberry.

Ahmad heads the company's product, art and UX verticals, while Agarwal takes care of the engineering and technology divisions. Pradeep Gupta, another IIT-Kharagpur alumnus, who is a founding member, heads marketing and growth. 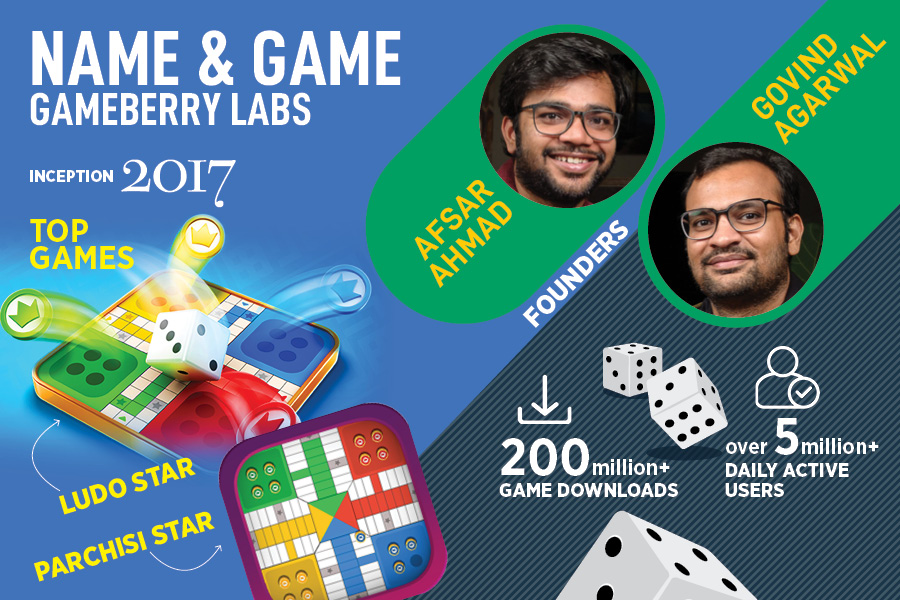 Five years since inception, Gameberry Labs today has two popular social multiplayer games—Ludo Star and Parchisi Star—with over 200 million downloads and more than 5 million daily active users. Two new games in the word and board games categories—Backgammon Friends and Word League—are currently being beta-tested in Turkey and the UK. “All the games in our portfolio are socially engaging and designed to enable players to break away from stress, connect and compete with others, while adding joy to their everyday lives,” says Ahmad.

“In the Indian gaming market, western developers were the leaders earlier. But then offerings from developers like Gameberry Labs and Gametion did something brilliant—they gauged the taste of Indian gamers. They are producing games attractive to Indians of all ages,” explains Roland Landers, CEO, All India Gaming Federation. “They are disrupting the gaming market landscape in ways that was not possible a few years ago.” 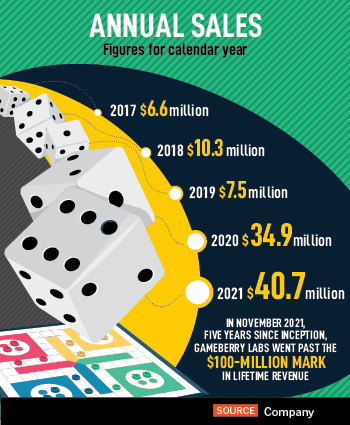 Gameberry Labs began operations with the savings of both the founders. The company has a free-to-play business model where players are not charged to play the game. However, they have the option to re-roll the dice using an in-game virtual currency called ‘gems’ which can be purchased from the ‘shop’ section. “This monetisation model has worked for us,” says Ahmad. The revenue is driven by in-app purchases (IAP) from the game and rewarded ads. “IAP monetisation drives the revenue model for us… 70 percent of our revenue comes from IAPs and the rest from rewarded ads,” he says. Saudi Arabia, the US and Spain are the company’s top revenue markets.Also read: Flushed with VC money, gaming and esports brands hunt growth beyond pandemic

The immediate competition to Ludo Star is Gametion Technologies’ Ludo King that became a household name during the pandemic. It has seen more than 700 million downloads and claims to be ‘a record-breaking casual game in the history of mobile gaming’. Capturing the online-Ludo-playing audience from such renowned games in the market is Gameberry’s biggest challenge.

According to a report by the IBEF (Indian Brand Equity Foundation?), the Indian gaming industry has recently overtaken the US in terms of user base that exceeded 300 million. Mobile phones dominate the Indian gaming industry, with phone-based gaming apps accounting for 86 percent of the total gaming apps in 2021. India also experienced a 22 percent rise in the adoption of mobile games in 2021.

According to Landers, online gaming in India had a CAGR (compound annual growth rate) of more than 28 percent even after the Covid restrictions were lifted. He believes that along with games such Ludo King, multiplayer and single-player hyper casual games made in India have taken the Indian market by storm. “The entire online gaming industry is currently valued at $2 billion and aiming at $5 billion by 2025. So, yes, the growth in revenue terms and distribution-wise is tremendous. There is enough headway for Indian mobile-first games to capture the global market,” says Landers.

Despite the stiff competition, Gameberry Labs claims to stand out from the rest. “Both our flagship games—Ludo Star and Parchisi Star— have helped us understand player versus player (PvP) in mobile gaming really well. In the last five years, we have deeply understood both the retention and monetisation sides of PvP games,” says Ahmad.Also read: There will be a complete change in how people perceive real money gaming: Deepak Gullapalli

During its market research on existing Ludo games, the Gameberry team discovered that a similar board game named Parchis/Parchisi was deeply rooted in Spanish culture. People in Spain, Morocco, Colombia and Mexico had a similar connection with Parchisi as Indians had with Ludo. “While Ludo still had some competition and a few games in the market were doing well, Parchisi had an untapped potential market. So, we decided to launch Parchisi and then work on Ludo Star. To leverage the development efforts, we designed a structure in which both the games were running from the same codebase,” says Ahmad.

Gameberry’s games are designed to appeal to the core motivations of players behind playing table-top games in a PvP manner, with a monetisation layer that does not hamper the retention of players.

“The evolution and extension of our games into a mini social platform that is being extensively used to connect with new people and develop connections is one of the differentiating factors that has made our games so popular. Each board in our games has a story. Our games have helped people find life partners, reconnect with lost friends, and bond with family members,” explains Ahmad.

For Raja Sahu, a 40-year-old watchman working in a housing society at Jabalpur, Madhya Pradesh, Ludo Star was a blessing in disguise during the lockdown. “During the lockdown, I was here and my wife was in our village. For months, there wasn’t a way for me to visit her. Ludo on our phones was a great way for us to spend time. We would bet on defeating each other and later tease each other on call,” he says.

The founders of Gameberry assert that Ludo Star has evolved into something more than just a game. It has become a platform for connecting and bonding. “We envisioned exactly this, and we are delighted that it has become a reality. From players finding their life partners on the game to Pakistani celebrities bonding with their in-laws, Ludo Star has changed the way people look at Ludo,” says Ahmad. In the next 12-14 months, Gameberry Labs is looking at doubling its team size, and investing more in technology creation. Also read: Why gaming companies are acquiring adtech firms and capabilities

The mobile gaming sector is the fastest-growing segment among all the sectors in the media and entertainment industry. With access to affordable mobile handsets and internet across the country, the number of mobile gamers is expected to reach over 500 million by 2023-24. “We believe that in the next 10 to 15 years, gaming and metaverse will be the core of the media and entertainment economy in India,” says Landers.