India's richest give less than 1% of their wealth to philanthropy, but there is a ray of hope

Younger philanthropists, with tech entrepreneurs in the lead, are making thoughtful social investments, says the India Philanthropy Report 2022. While the country's super-rich need to push the envelope of giving, we also need to build an ecosystem that incentivises philanthropy 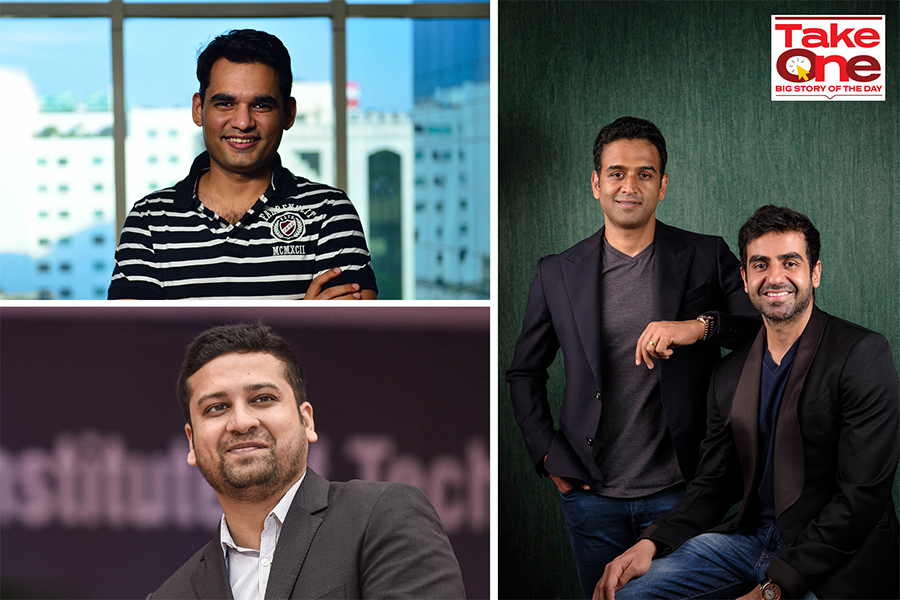 Nikhil Kamath says the reason philanthropy makes sense in today’s world is because the wealth disparity among people is high and is constantly growing. Kamath, 35, the co-founder of stock brokerage company Zerodha, is India’s youngest philanthropist—according to the Edelgive Hurun India Philanthropy List 2021—and has pledged to donate a quarter of his wealth. He plans to give back Rs750 crore over the next three years along with his brother Nithin, the co-founder and CEO of Zerodha. “We are in a position to effect change, so philanthropy is prudent and necessary for us to undertake,” says Kamath.

India’s billionaires and the super-rich, however, seem to be some way off from reaching their philanthropic potential. As per the India Philanthropy Report (IPR) 2022 released on Tuesday by Bain & Company and Dasra, as the economic disparity among the top first percentile and bottom 50th percentile of people in India continued to widen, and Covid-19 pushed more than 20 crore people into poverty, overall family philanthropy [giving by ultra high net-worth individuals (UHNIs) and high net-worth individuals (HNIs)] actually contracted.

The volatility comes largely from the UHNI segment. There are over 1,000 UHNIs in India in FY21, up from 828 in FY20. Their cumulative net worth increased by approximately 50 percent, from about Rs60 lakh crore in FY20 to about Rs90 lakh crore in FY21. Relative contributions as a percentage of wealth among UHNIs in India, however, range from 0.1 percent to 0.15 percent, which is low in comparison with countries like the US, UK and China (see box). 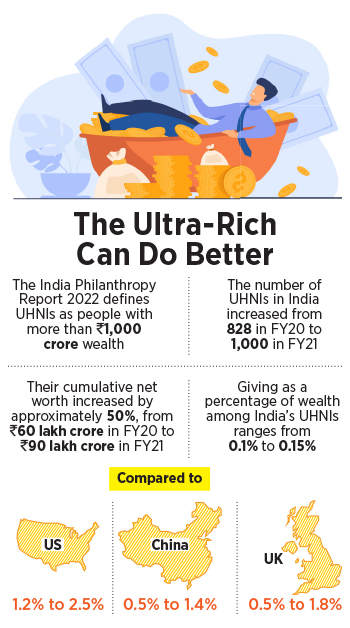 Funding in FY21 was at 8.5 percent of the Gross Domestic Product (GDP). This is lower than the 13 percent outlay that government think tank Niti Aayog estimates the social sector will need if India has to meet its United Nations Sustainable Development Goals (SDG) by 2030. The IPR plugs the deficit at Rs8 lakh crore in FY21 and Rs10 lakh crore in FY26 if the same trajectory continues.

Neera Nundy, co-founder of Dasra, says one of the biggest challenges in tracking philanthropic funding has been the lack of disclosure on outlays and spending. In the wake of the pandemic, there was a lot more ad-hoc giving that the data could not capture. “But the numbers do reflect that there is a gap and a lot more potential,” she says. “I hear from families that they want to do a lot more, and just anecdotally, we have seen an increase in people wanting to participate in philanthropy during this crisis.”

She says the next generation is participating far more in the direction that family philanthropy can take, even though they may not be the ultimate decision-makers. “But in the next three to five years, they will be more involved,” Nundy says, explaining that the mindset will be that of being more open around disclosures and transparency.

The report also says that the philanthropic potential of UHNIs is being steered by the emergence of startups and young tech entrepreneurs. UHNIs from the technology sector, for instance, have donated more generously than other sectors (see box). While tech constitutes about 8 percent of total UHNI wealth of around Rs85 lakh crore, the sector contributes 35 percent of the total philanthropic donations of Rs4,500 crore in FY21. 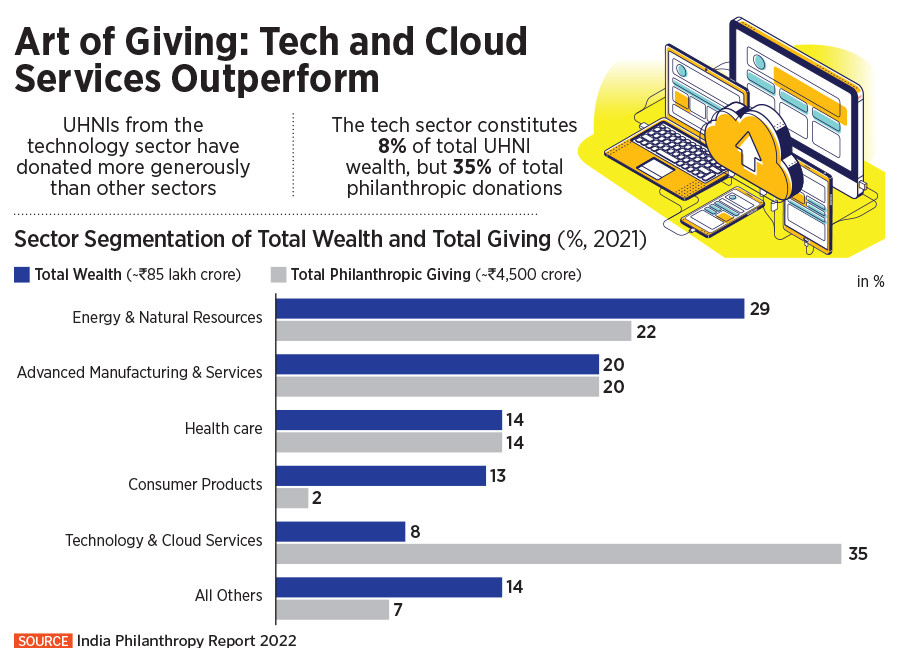 Apart from the Kamath brothers of Zerodha, examples of philanthropists from the tech industry include Flipkart co-founder Binny Bansal, 38, who, according to the Edelgive-Hurun India Philanthropy List 2021, increased his annual donations by 155 percent and donated Rs14 crore, primarily toward education. There is also the ACT Grants, a Covid-19 relief fund formed by a group of venture capitalists, private equity investors and startup executives, who contribute their personal money, time and expertise to steer philanthropic efforts centred around new-age technological innovations.

Other people from the industry involved with the ACT Grants include Mukesh Bansal, CEO of Cure.fit, Vani Kola, managing director of Kalaari Capital, and Tarun Davda, managing director of Matrix Partners India. “We started as a single-focus platform around Covid relief in 2020, but now, learning from that experience and engagement, we have extended our commitment to the impact sector by supporting efforts across health care, education and environment,” says Prakash, adding that the team has so far successfully deployed more than Rs500 crore across 100-odd grants.

Younger philanthropists, especially those who come from the tech sector, are more risk-taking and agnostic about form, says Ingrid Srinath, director, Centre for Social Impact and Philanthropy (CSIP) at Ashoka University. They do not care about whether one takes the non-profit, for-profit or social enterprise route to achieve the desired impact, she explains. “They get more excited with solutions that have a tech element to them, than those that don’t. They are also more diversified into areas like mental health, climate research etc.”

Compared to Corporate Social Responsibility (CSR), which is more diversified across social sectors, about 60 percent of funds go to education and health care alone in family philanthropy and retail (community giving) respectively, as per the report.

There is room for youngsters to uphold a range of social causes that the previous generation might not have found relevant or urgent, says Kamath, who launched the Young India Philanthropic Pledge (YIPP) last year, where signatories, all under 45 years of age, pledge 25 percent of their wealth with a minimum spend of Rs1 crore per year. The efforts are going to be focussed around addressing climate action, education, hunger and malnutrition. Members of the YIPP include Gaurav Munjal, co-founder of edtech platform Unacademy, Sujeet Kumar, founder of B2B unicorn Udaan, and Amitabh Shah, founder of non-profit Yuva Unstoppable.

Srinath says the younger lot of philanthropists have a larger vision than traditional philanthropists. “They also want to be co-creators of social interventions rather than just passive cheque-writers, so they bring to the table their expertise and network to have more agency and achieve more scale.”

Prakash of Accel, who is also an advisor to the YIPP along with Biocon CMD Kiran Mazumdar-Shaw, agrees that it is a combination of time, money and effort. He says the leadership team of ACT Grants meets every week and they have a platform-level catch-up every month to keep the momentum going.

Based on projections, CSR, retail, and family philanthropy are set to grow by approximately 10 percent to 14 percent in the next few years. “There continues to be an information-expectation-priority asymmetry in the sector: Investing in strengthening ecosystems will help address that asymmetry and unlock greater, more equitable philanthropy,” the report says.

India’s ultra-rich have the potential to increase their philanthropic giving by eight times (Rs90,000 crore to Rs100,000 crore) if they have to match the percentage of giving of their UK and Chinese counterparts, and by 13 times (Rs160,000 crore to Rs170,000 crore) to match their US counterparts. In order to unlock this potential, it is important to remove barriers to giving by establishing formal mechanisms and infrastructure for philanthropists to donate more efficiently, says Radhika Sridharan, partner, Bain & Company. Data to track philanthropic trends, like the IPR, also helps to identify, measure and plug gaps, she says.

Srinath of CSIP points out that younger philanthropists tend to be impatient with the pace of change. “They come with a logic of disruption—which is how they earned their fortune—and similarly look to disrupt systems in the social sector to achieve impact rather than work within systems.” Nundy of Dasra says it is important to hand-hold philanthropists, particularly youngsters or those who are new to the sector, “to help them understand that social change is not fast”.

For younger philanthropists, the challenge is also that of collaboration, philanthropist Rohini Nilekani told Forbes India in a recent interaction. “We or philanthropists one generation above us did not collaborate so much. Now, I feel, young people have to learn how to collaborate in their philanthropy from the get-go, because nobody can do it alone. Not even the world’s richest foundations.” When everyone wants to have their own stamp on something and do philanthropy differently, “how do we find common ground?” asked Nilekani, stressing that the wealthy also owe it to society to be transparent about what they are doing with their wealth.

Kamath of Zerodha calls for government support, saying that without incentives, philanthropic contributions have to be driven just by the innate motivation to effect change. Srinath agrees. She points out that tax incentives might unlock greater philanthropic capital. Such incentives are not the underlying drivers for philanthropy, she explains, but “they send a strong social message from the government that philanthropic giving for the benefit of society is desirable behaviour”.