Over the last decade, India's largest private security company diversified its domestic play and opted for an aggressive inorganic route to expand overseas. The gambit seems to be paying off. But can it keep up the tempo? 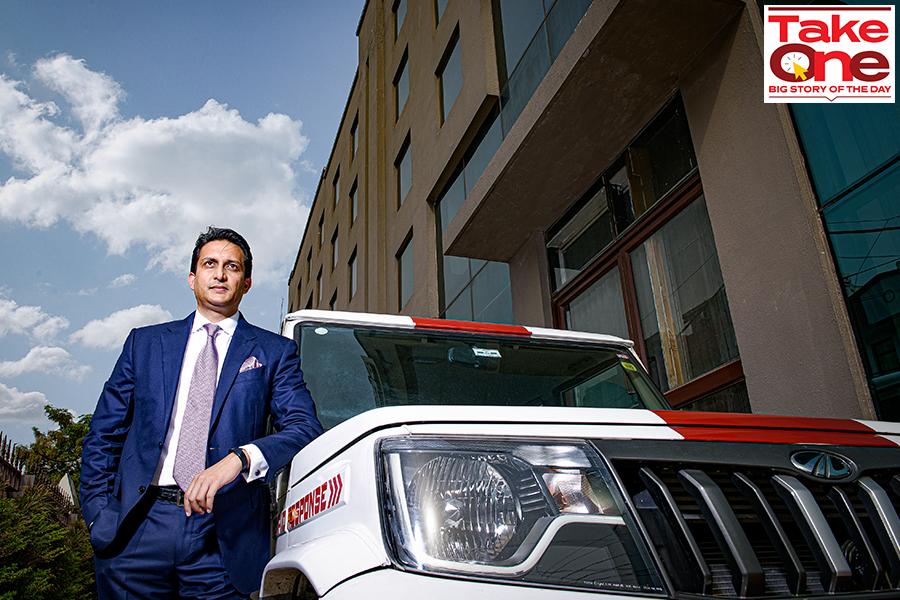 London, 2005. It was an audacious move. In fact, many labelled it as ‘outrageously reckless’, recalls Rituraj Kishore Sinha. Just three years into his stint at Security and Intelligence Services (SIS), the second-generation entrepreneur prepared a blueprint to diversify the private security business started by his father RK Sinha in 1974. Call it exuberance of the youth or brash confidence, Sinha, then 25, landed in London. The plan was to enter into the business of cash logistics in India, and the way to do so was to explore a joint venture with the best in the world: Securitas. “What do you mean by strategic alliance?” asked a baffled Thomas Berglund, the then president and CEO of Securitas. “Are you looking for a buyer?” The MNC honcho was a little bemused. “Do you want to sell your company?” he quizzed. “No,” came the reply. “I don’t want to sell. I want to build,” underlined Sinha. SIS, an obscure, tiny company from India, which did not even have $5 million in revenue, was trying to get into a joint venture with a global Goliath with over $12 billion in top line. Berglund didn’t entertain the idea, and the deal didn’t happen. Next year, Sinha ventured into the cash logistics business on his own. Two years later, in 2008, the young maverick was again getting ready to punch much above his weight. The world was in the midst of a deep financial crisis, but Sinha reckoned the timing was perfect to expand SIS outside India. “I was in talks to buy a guarding and patrol company in Australia, which was almost seven times my size,” he recalls. Back home, the reaction was along expected lines. “You are chewing more than what you can bite,” declared a few critics and business analysts. The company, they underlined, was spreading itself too thin. They were fair in their criticism. Just two years back, in 2006, SIS had made its first diversified bid. It was too early for the company to go global. The move could have been suicidal. 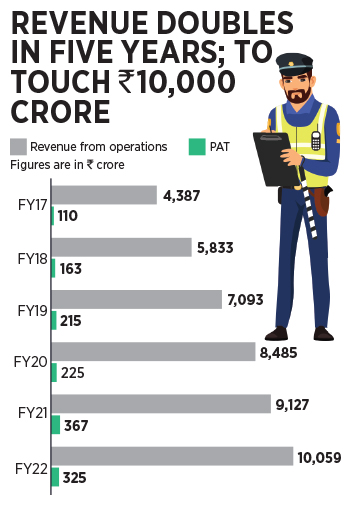 What, though, egged Sinha to act boldly was the war chest he had built. In 2007, US-based hedge fund DE Shaw reportedly picked up a 14 percent stake in SIS for around Rs300 crore ($75 million), valuing the company at about Rs2,150 crore ($525 million). A year later, SIS closed FY07 at Rs150 crore. Sinha was in a flurry of talks with private equity (PE) players to fund the deal. Everything was going according to plan. There was a postscript, though. Global recession battered the asset class, PEs stayed away from the deal, and nobody was willing to get bruised in the whirlwind of 2008. Stranded, Sinha somehow managed to convince SBI to back the acquisition plan. In 2008, SIS bought Chubb Australia for $238 million from US conglomerate United Technologies Corp. Over the next decade, Sinha stitched a string of acquisitions—two in Australia and the rest across India, Singapore and New Zealand—and a flurry of joint ventures. The gambit seems to be paying off. In FY22, SIS entered into the Rs10,000-crore revenue club by clocking Rs10,059.1 crore, a growth of over 10.2 percent over the last fiscal. At Rs2,648 crore, the revenue from operations in the fourth quarter was the best quarterly performance by the company since it got listed in 2017. What is most interesting is that the security services, facility management and cash logistics major took just five years to double its revenue.

Sinha, however, uses a long-term lens to make sense of the data. “From Rs25 crore in 2002 to Rs10,000 crore in 2022. That’s our story,” he says. He quickly qualifies his statement. “It’s a profitable and sustainable story,” he smiles. SIS has not only emerged as the biggest security player in India but is also the second-biggest in cash logistics and facility management. Interestingly, close to 45 percent of the revenue comes from outside India, largely from Australia. Apart from a strong footprint Down Under, Sinha has spawned his army of security guards across 350 districts dotting Tier II and beyond in India. “Bharat is rising and will continue to grow and shine,” he adds. What has inspired SIS in building and shining its story is McDonald’s. Sinha explains. “Have you ever wondered why the taste of burgers is almost the same across country?” he asks. Same taste, uniform quality and the speed helped the company expand furiously. The magic, he underlines, was in institutionalising a uniform system and culture. SIS too did the same when it came to training manpower. “McDonaldisation helped us scale,” he says. 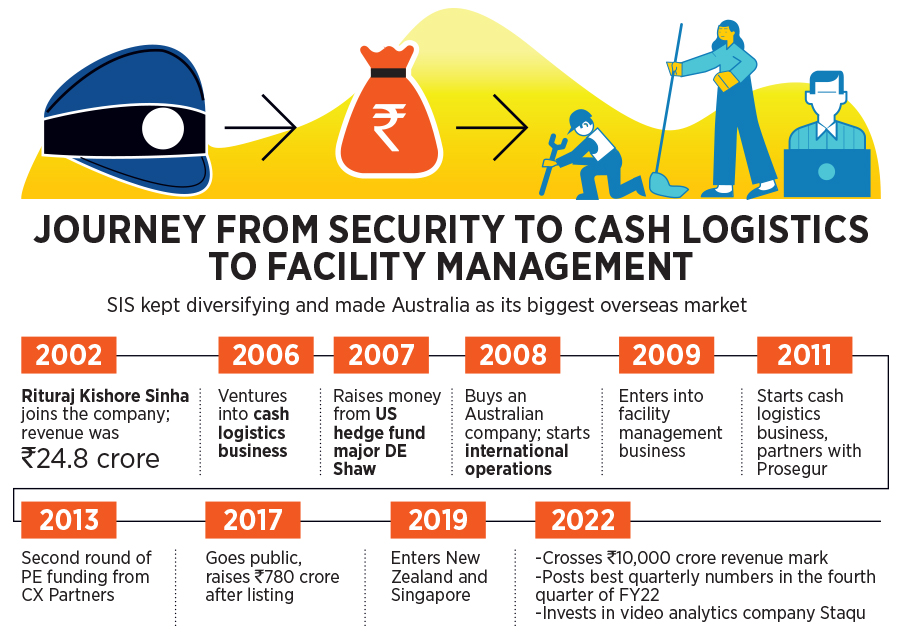 Despite the pandemic, the company kept on scaling over the last two years. Though the tailwinds did help and the tag of coming under ‘essential services’ also came in handy, having multiple sources of revenue turned out to be the biggest blessing. “The beauty of our business model is that we are not confined to one service,” says Sinha. The move to diversify the business is now paying off. The cushion of overseas presence also helped when the country was reeling under the first and second wave of the pandemic and lockdowns. The operations in Australia remained robust and kept the revenue machinery well-oiled.

Analysts are upbeat about the long-terms prospects of the company. With IT, retail and hospitality opening up and rebounding after the lockdown, SIS is well-placed to drive volume growth, underlines Motilal Oswal in its latest equity research report. The company, the note adds, will post strong revenue in the coming years on back of a strong order book and healthy pipeline. “Longer term tailwinds from sector consolidation will help SIS deliver 17 percent revenue CAGR during FY22-24,” it adds. Even though international business tapered off a bit in the fourth quarter as ad-hoc contracts faded away, the company is set to post double-digit growth on the back of a strong India security and facility management story, underlines Edelweiss in its equity report. “We continue to be bullish on structural growth opportunities that businesses of SIS offer,” the report adds. 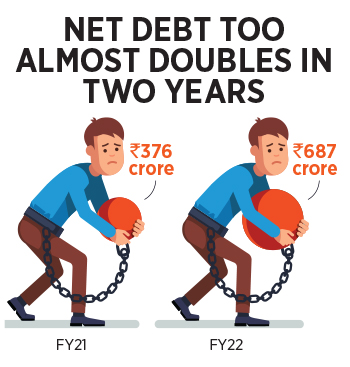 Sinha too is betting big on the India story. The world, he reckons, has changed during Covid, and the next decade belongs to the country. “India will be a $10 trillion economy over the next few years,” he says. With all the growth metrics on track, he argues, SIS is well placed to make the most of the opportunity. The going, though, won’t be easy. One of the big challenges would be to ensure that the debt doesn’t balloon at an alarming rate. It has jumped from Rs376 crore in FY21 to Rs687 crore in FY22.Another big task is to scout for new levers of IT growth to give the security company a tech makeover. SIS, Sinha points out, had made a beginning on this front. Early this year, it invested in video analytics startup Staqu. As video analytics-based security solutions are expected to transform the security industry worldwide, the idea is to ensure that SIS keeps pace with this transformative trend. But can the company be a bit more aggressive in its approach? In simple terms, the promoter family still owns over 71 percent. Is there room to dilute more, raise more capital and look for more avenues of growth? Sinha explains the game plan. SIS, he underlines, is a listed entity, the sector has a long runway and massive potential. The idea is to conserve equity and build a business that delivers over 20 percent return on equity over the next few years. “As and when the need arises, the promoters would be happy to dilute,” he adds. The vision for 2025, he lets on, is to double the market share in all categories. “We will still be bold in pursuing our dream,” he signs off.