As people have started working from offices, the number of such complaints rose by 27 percent in FY22 compared to the previous year, according to data analysis by Complykaro.com. Complaints in government-owned companies lag private peers in comparison 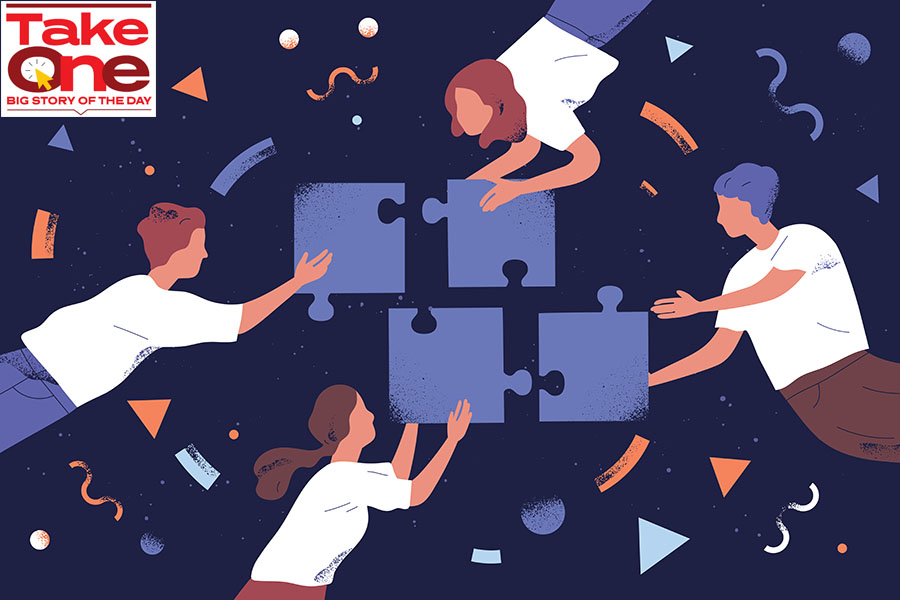 The total number of sexual harassment complaints at workplaces climbed by 27 percent in the financial year ending March 2022 compared to the previous year, according to data analysis compiled by anti-sexual harassment advisory Complykaro.com Image: Shutterstock

A rise in the number of sexual harassment cases in India’s top companies indicates the urgency for many organisations to address culture and conduct issues in creating a safer workplace environment. As workforce sentiment is changing dynamics following Covid, the increase of sexual harassment cases raises concerns about safety of employees as many offices have gradually opened up. Nearly a decade after the Sexual Harassment of Women at Workplace (Prevention, Prohibition and Redressal) Act was passed in 2013, sexual harassment cases continue to threaten women’s safety and dignity.

The total number of sexual harassment complaints at workplaces climbed by 27 percent in the financial year ending March 2022 compared to the previous year, according to data analysis compiled by anti-sexual harassment advisory Complykaro.com based on company annual reports. The analysis has considered only companies in the BSE 100 index which account for over 65 percent of total market capitalisation of listed firms in India.

Data showed that these companies registered 759 cases in FY22 compared to 595 reported in FY21. The number of cases has not surpassed pre-Covid levels. In FY20, these companies reported an aggregate of 999 sexual harassment cases amid the #MeToo movement gaining momentum, leading to employee activism in India. Typically, in such waves, employees feel empowered and confident to break their silence when it comes to reporting misconduct issues at the workplace.

“Work-from-home had resulted in considerable reduction in sexual harassment complaints, but they have again begun to rise due to the opening of offices. The higher cases are due to the partial lifting of lockdowns compared to last year,” says Vishal Kedia, POSH expert and founder, Complykaro Services.

As India Inc switched to remote and hybrid models of work during the lockdown, complaints in companies under review declined in FY21, while employee policies strategised to create a more encompassing mechanism to address and report similar issues.

Priyanka Sinha, partner at law firm A&P Partners, attributes increasing attentiveness and surveillance by companies in implementing the Sexual Harassment of Women at Workplace, Act 2013, to higher number of cases registered in FY22. “As workplace culture and conduct have now taken centre stage in most organisations’ employee policies, they are scaling up to increase and widen the surveillance for ensuring a safe and secure work environment. Employees are encouraged to raise concerns about harassment, and ensure complaints are addressed respectfully and responsibly,” says Sinha.

Also read: Making workplaces safer for women: Why companies can do better

However, she is concerned that there are rising cases of misreporting. “We have observed harassment cases filed with intention of causing malice to the ‘so-called’ abuser. There are several instances where we have found the cases to be falsely implicated for not getting favours etc. It is alarming,” adds Sinha.

According to Sinha, the internal complaints committee (ICC) has the responsibility of doing the due diligence to ensure there is no misreporting or no person is wrongly implicated. “After all, such cases also bear an economic cost to the company,” she asserts. Workplace sexual harassment imposes a range of costs that impact individuals, including victims, perpetrators and employers. 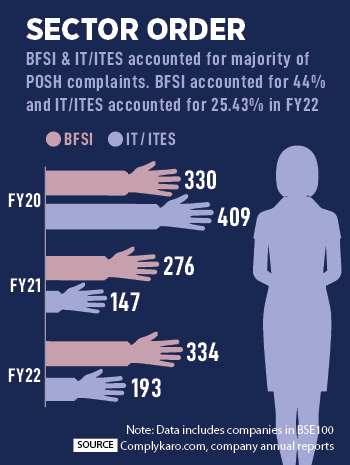 Analysis of the data indicates a dichotomy or stark contrast as the number of complaints received in government-owned companies lag private peers in comparison. Among 14 public sector undertaking (PSU) companies in the BSE 100, 12 reported complaints, mostly with one or two cases. Among PSUs, the State Bank of India with 43 complaints has the highest number of reported cases in FY22. However, that’s a decline from 45 in the previous year. Next among PSUs is Bank of Baroda which reported 25 cases in FY22 compared to 16 in the year-ago period, followed by Indian Oil Corporation—nine in FY22, from four in the previous year.

Among sectors, banking, financial services and insurance (BFSI) and Information technology (IT) and IT-enabled services (ITeS) accounted for 69.5 percent of all sexual harassment complaints in FY22. Out of the total, BFSI accounted for 44 percent or 334 cases in FY22, showing an increase compared to pre-Covid levels (276 in FY21 and 330 in FY20).

IT/ITES accounted for 25.43 percent (193) of the total cases in FY22. The number of complaints in the IT/ITES space is still 46.25 percent lower compared to pre-Covid levels though it inched up from ‘59 percent lower’ during the complete shut down a year ago in FY20.

BFSI and IT/ITES have a higher workforce compared to other sectors. Besides, experts feel employees in both the sectors are more aware of their rights and privileges.

How the numbers stack up?

Among all the companies under review, HDFC Bank with 51 cases received the maximum complaints in FY22, but those are just 8 percent higher than last year. Next are ICICI Bank (46), Axis Bank (45) and Tech Mahindra (45). Tech Mahindra showed the maximum increase in the number of complaints compared to 30 in the previous year. 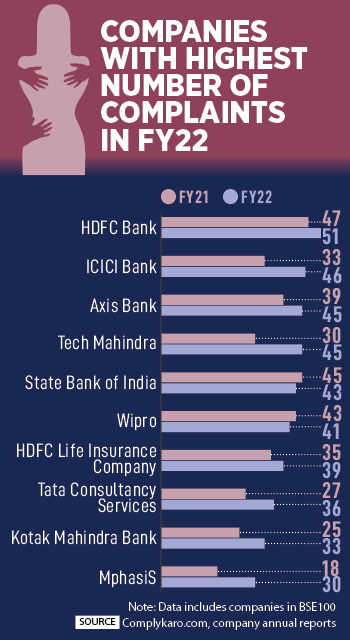 Another company which showed a big jump in the number of cases is InterGlobe Aviation, which operates airline company IndiGo. It reported 29 cases in FY22 compared to 15 in the previous year; the number was 36 in FY20.

He says the airline company has zero tolerance towards any acts of sexual harassment and has a robust prevention of sexual harassment policy. It has set up an internal committee comprising over 150 dedicated employees who are focussed on ensuring a safe working environment. “In addition, we have set up an independent reporting channel for complainants. These awareness initiatives have instilled faith in the minds of employees that they can report matters of sexual harassment at workplace without any fear, and that, no concern will go unnoticed or unaddressed,” the spokesperson adds.

Infosys showed the maximum decline in the number of complaints—11 in FY22 from 16 in the previous year. The IT major has continued the reduction trend even post lockdown, resulting in 81.66 percent fall from pre-Covid levels, according to the data analysis.

Email queries sent to a few companies mentioned in the story remained unanswered till the time of filing the story.

What about the informal sector?

The Annual Review of the State of Sexual Harassment in India, a report by the Women’s Indian Chamber of Commerce and Industry’s Council of Ethics, said that most women who faced sexual harassment decided against reporting the incident to appropriate authorities. The report released in May said that over 50 percent of respondents experienced sexual harassment at least once at the workplace. Of the people who faced such incidents, 55.2 percent decided not to file a complaint. 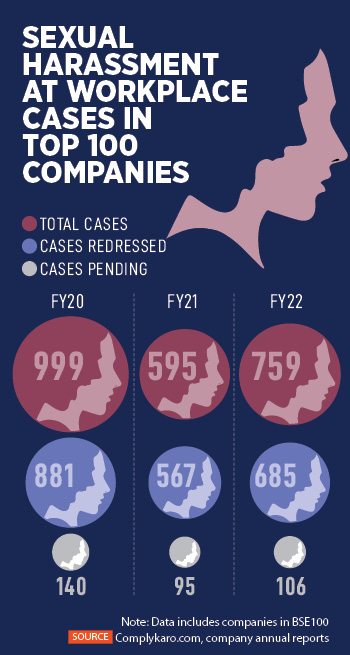 What is the Posh Act?

The Sexual Harassment of Women at Workplace (Prevention, Prohibition and Redressal) Act, 2013, has criminalised offences such as sexual harassment, stalking and voyeurism. The Posh Act has been enacted with the objective of preventing and protecting women against workplace sexual harassment, and to ensure effective redressal of complaints of sexual harassment. As per the Posh Act, sexual harassment includes unwelcome sexually tinted behaviour, physical contact and advances, demand or request for sexual favours, making sexually coloured remarks, showing pornography, or any other unwelcome physical, verbal or non-verbal conduct of a sexual nature. The Act also mandates companies to establish an ICC that is responsible for grievance redressal.

Under the Companies Act, 2013, and Sebi (listing obligations and disclosure requirement) LODR 2015, companies are mandated to report the number of sexual harassment cases in the annual report.

Experts believe that the regulatory push toward effectively addressing concerns about sexual harassment at the workplace has driven a noticeable change within corporate India, but there are ambiguities that still need to addressed.

According to Nishith Desai Associates, although the law preventing sexual harassment at workplace has been in force since 2013, there remains lack of clarity on various aspects. “Many are also not fully aware of the criminal consequences of sexual harassment. Lewd jokes, inappropriate comments etc are dismissed as normal, with women being hesitant to initiate actions due to apprehension of being disbelieved or ridiculed, which underpins the need for greater awareness and greater enforcement,” the firm said in a research paper released in December 2020.

A landmark inquiry unveiled shocking cases of abuse of women workers at companies, including BHP Group and Rio Tinto Group in Australia’s mining industry, according to a Bloomberg report. The inquiry revealed that BHP recorded 91 reports of alleged sexual harassment or assault in the year through June 30, 2021, of which 79 were substantiated. Rio Tinto, from January 2020 to August 2021, received 51 complaints of sexual harassment or assault. The number of reports of sexual harassment in the workplace that were filed to the US government peaked at about 13,000 in 2018. The number has decreased every year since, with about 10,000 filed in 2021, according to reports.

Despite increased public awareness and efforts by companies to sensitise employees, sexual harassment continues to plague Indian workplaces, striping people of their dignity. Though companies are taking efforts to make workplaces diverse, harassment, violence, exploitation and bias based on gender do not make offices safe and pose a threat to the equal participation of women in the workforce, thus bringing disparity in the economic and social norms.