Uttkarsh Mehta: Meet the man behind the razing of Noida's Supertech twin towers

Uttkarsh Mehta might not be Rohit Shetty, the Bollywood filmmaker known for explosive stunts in his movies. But the Mumbai-born entrepreneur behind Edifice Engineering does what not many in India do for a living: Demolish buildings 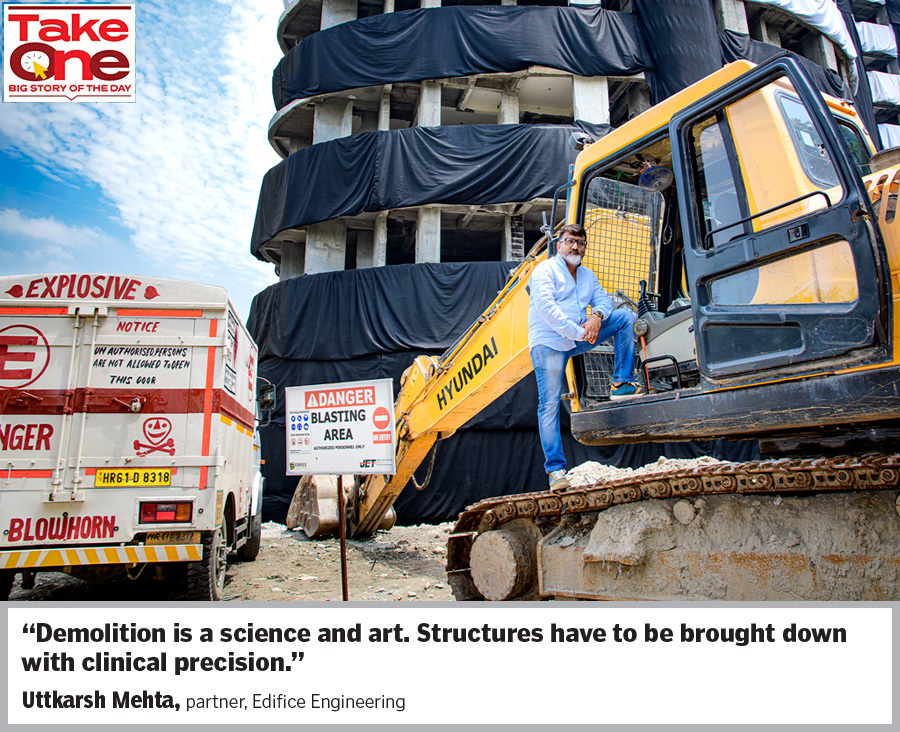 Sector 93A, Noida, Uttar Pradesh. “Doctor sahab operation ki taiyari kar rahe hain (The doctor is preparing for the operation),” stresses Mayur Mehta, as he leads us to the hyper-sanitised zone. The road leading to the OR (operating room) has been blocked for weeks, unauthorised people are not allowed inside the heavily barricaded perimeter, and the ones who can enter are minutely frisked by police personnel. The project manager takes off his yellow helmet, wipes his brow and takes a deep breath. “It has been a long day,” he says with a smile.

It’s an hour past noon on a dead Sunday. The sun is beating down relentlessly on skyscrapers Apex and Ceyane which are wrapped in wired mesh and black and white geo-textile cloth; the adjoining housing societies—Emerald Court and ATS Village—wear a sombre look; and a vibrant lush park just opposite the towering structures is playing host to a bunch of motionless cars. The silence around the area is jarring. “Imagine if you have to live with this loud silence continuously for six months,” says the project manager who has been away from his home in Mumbai since February 20. “I just shadow the doctor,” he adds smiling.

Just 500 metres away from the OR is a signboard planted on the road. It reads: ‘Danger: Blasting Area. Authorised personnel only’. “Are these guys with you?” quizzes one of the security staff. The project manager’s colleague Chetan Dutta nods. “They are here to see the doctor,” says the certified blaster from Haryana in an assuring tone. As we enter the doctor’s den—a 20-ft iron container—Dutta faces the heat. “You were supposed to go and check the wirings. What are you doing here?” asks the bespectacled ‘surgeon’. He then gazes at the project manager. “Where are the tools I ordered?” asks Uttkarsh Mehta, who is unofficially known as ‘doctor’.

Officially, Mehta happens to be a partner at Edifice Engineering, a Mumbai-based company that has been assigned the task of razing down the illegal twin towers built by real estate player Supertech in violation of a bunch of regulatory norms. “We are doing this in collaboration with our South African partner firm Jet Demolitions,” says Mehta, a mechanical engineer from Maharashtra who completed his post-graduation in finance, marketing and foreign trade. “Demolition is a science and art. Structures have to be brought down with clinical precision,” says the man who spent over a decade across industrial engineering and construction companies such as ThyssenKrupp and Hilti.

In 2012, Mehta joined hands with Jigar Chheda and the duo started Edifice Engineering, a company that brings down structures of all kinds—factories, dams, stadiums and buildings. “I won’t label myself as a Demolition Man,” he says, explaining the logic. Demolition, he underlines, has a negative connotation. “That’s why the name of the company is Edifice Engineering,” he says with a smile.

Okay, if razing buildings is not demolition, then what is it? Mehta explains his nature of work. “We are in the business of constructive destruction,” he contends. “It’s not as simple as bomb laga do aur uda do (plant a bomb and destroy it),” he adds, alluding to the wide perception that people have about the job of bringing down structures. “It’s not a Rohit Shetty movie where you see cars and buildings flying in the air,” he says with a laugh. Every structure doesn’t need to be brought down by explosives. But wherever there is a need—as it is now in the case of the Noida twin towers or the 19-storey building in Cochin that Edifice and Jet razed down in January 2020—it is done by using controlled implosion. “And it has to be done perfectly,” he says. Imagine what will happen, he asks, if a surgeon’s knife misses the target by an inch or even less than it. If one does an operation, he continues, that results in heavy loss of blood, then the objective is defeated. “Similarly, demolition has to be done with maximum impact and negligible collateral damage,” he says.

A decade ago, Mehta saw maximum advantage in entering into the niche business. “I am a Gujarati. I can spot where money and opportunities are,” smiles Mehta who was not fascinated by the spare parts’ business of his father. His mother, a tutor, ensured that her son continued with his studies and pursued whatever he was passionate about. “I always loved engineering,” says Mehta who rates himself as an average student during school days. After completing his engineering and a decade as a professional, Mehta and Chheda wanted to do something that not many were doing. “All wanted to build. We decided to destroy,” he says with a smile. Back then, the industry was highly unorganised and dominated by mom and pop contractors who lacked technical skills.

The first year, though, was not a breeze for Edifice. There was ample work but the size and scale remained small, which in turn meant not much money. “We posted Rs 50-lakh loss in the first year,” says Mehta. The loss didn’t dampen the spirits of the enterprising duo who slogged hard over the next few months. Gradually, the word spread about the existence of professionals in the demolition business, and there was no looking back. Over the last decade, Edifice has executed a wide range of challenging projects ranging from demolishing an 11-kilometre bridge in Patna, Bihar, to bringing down the Telangana secretariat and the old Motera cricket stadium. Talking about his South African partner, Mehta points out that Jet Demolitions safely brought down the 108-metre-tall Bank of Lisbon building in Johannesburg in 2019. “People think it takes minutes or seconds to flatten a structure,” he smiles. “It doesn’t,” he says, adding that a lot of sweat and blood goes in behind the scenes. 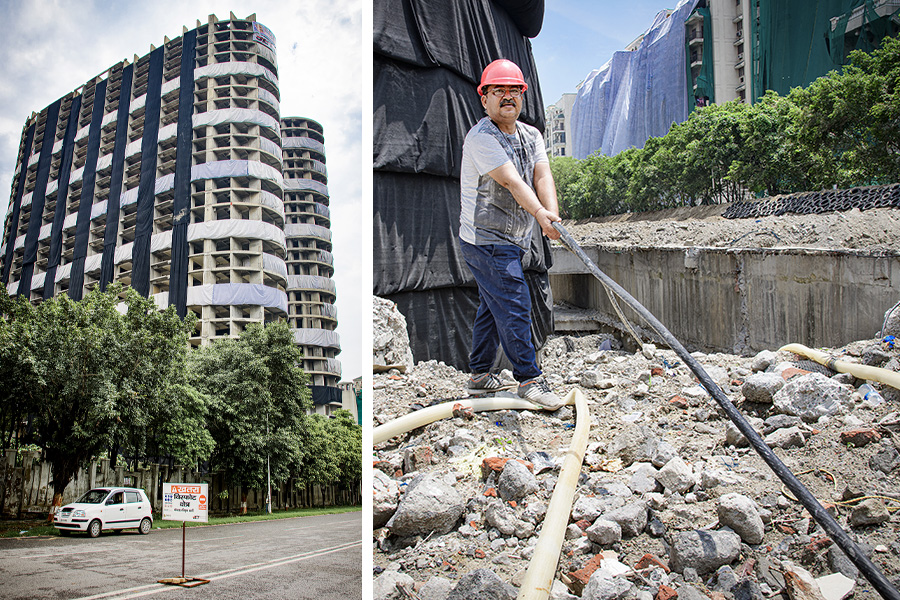 In the case of the twin towers, the preparation started in February this year. “Log bolte hain 6 mahine mein aapne kya kiya. Kuchh to dikha nahin (What have you done in six months? We can’t see anything),” says Mehta, explaining the various stages of detailed planning that went behind creating the blueprint. Master blaster from South Africa Joseph Robert Brinkkman, his team and the Indian partners spent hours analysing Apex (32 floors) and Ceyane (30 floors)—the towers to be demolished. Around 14 kilometre length of holes were drilled by 300 workers, more than 3,500 kg of explosive was filled in around 9,400 holes, and shear walls—they keep structures from blowing over by resisting the lateral forces of wind and seismic activity--and lift shaft have to be taken care of. Every brick, partition and small structure inside the towers has to be dismantled and staircases weakened. “These things can’t be done overnight,” he says. What helps keep Mehta glued to the business of ‘destruction’ is his passion. “There is no creation without destruction,” he says with a smile.

The business of ‘destruction’, though, doesn’t hand you a pot of gold. Ask Mehta, who is happy with the effort and satisfaction that comes with the job. “Edifice is now a Rs 150 crore company. It’s not a joke,” he says. Is there a flip side to this profession, and he shares a golden nugget: Don’t enter the kitchen if you can’t handle the heat. The business of demolition, he underlines, is a high-pressure job. “There are sleepless nights. You miss by a micro-inch and everything changes,” he says. What, though, gives him confidence and has helped him so far is faith in his engineering skills and the track record of his foreign partner when it comes to ‘implosive demolition’.

Tweets by @forbesindia
Photo of the day: Boundless joy
Dollar stores are a favourite again