Eight years on, it is yet to return money to its investors even as it looks to raise its second fund 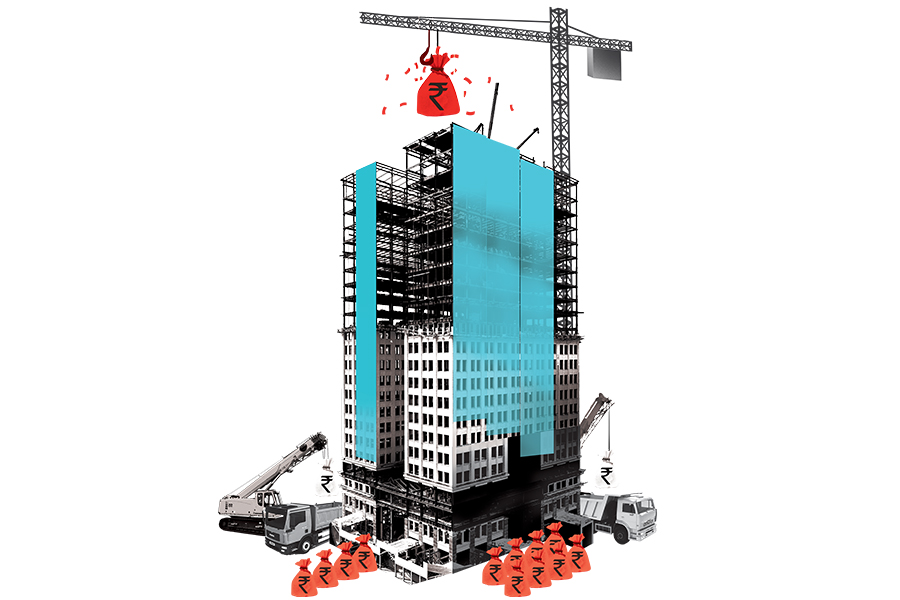 The year was 2009. Indian real estate was in a shambles, as were real estate private equity funds, especially foreign ones, which provided an opportunity for homegrown firms to launch their funds. One of them was the Aditya Birla Group-backed Aditya Birla Real Estate Fund (ABREF).

In 2010, ABREF raised ₹1,056 crore; but in August 2018, when the fund’s lifecycle came to a close, it was yet to exit most of its investments or return even the principal amount.

ABREF was raised by Aditya Birla Sun Life AMC Ltd, previously known as Birla Sun Life Asset Management Co Ltd. The fund’s documents show that it was primarily raised on the assumption that demand for residential realty would reach 7.5 million units by 2013, led by Mumbai, Bengaluru and Hyderabad.

By 2015, the fund had invested 44 percent of its capital in Mumbai and 28 percent each in the National Capital Region (NCR) and Chennai. It had a mandate to invest in equity, equity-related and debt instruments of companies engaged in construction and development of real estate assets, including residential, commercial, retail and other projects. It, however, invested only in residential projects.

Ironically, though, even as the fund’s private placement document says “residential realty—the juicy bit”, there is no juice for the investors of this fund.

According to documents accessed by Forbes India, ABREF’s life tenure was six years, with two one-year extensions, which ended this August. It was a close-ended fund, meaning the capital had to be returned by the end of its life. In August, ABREF notified its investors that due to the global financial crisis and subdued real estate markets, coupled with a liquidity crunch, the fund had been unable to liquidate its position and return capital to investors. And that they were seeking an extension.
*****

Fund extensions in the real estate sector aren’t uncommon, where exits have been difficult to come by. But the fund has been able to fully exit only three of its 13 investments. Besides, it has been consistently delaying returning capital to investors on committed dates since August, says an investor in the fund who did not wish to be identified.

“Only 19 percent of principal has been returned over an eight-year period, wherein both fund extensions have been exhausted. Normally, a fund reserves extension periods only to ride out the winners and maximise the internal rate of returns [IRR],” says the investor. “Several payouts were promised in August and September, which have not materialised and the delay has not been explained. Many projects are running one to two years behind on servicing debt, and the fund level IRR is not likely to be positive.”

The fund’s investor letter on August 7 says that till date it has returned ₹564.93 crore from all its exits, which include principal and gains from these projects. Over the lifetime of the fund it has made 13 investments of ₹1,056 crore, of which it has exited three investments fully and two partially.

“Till date we have returned 53 percent of the total amount raised. This includes a complete exit from three projects with returns in the range of 20 to 31 percent, and a partial exit from other two projects,” wrote A Balasubramanian, chief executive officer at Aditya Birla Sun Life AMC, in an emailed response to Forbes India.

The fund manager’s note to investors further said that of the remaining 10 investments they would exit four before August 30, and were hoping to return nearly ₹140 crore to investors. However, nothing has come of these expected returns.

It was looking to exit its investments in Godrej Tranquil (earlier known as Shivam Imperial Heights), a joint development between Godrej Properties Ltd and Shivam Realty; the Imperial Heights Project with Radius Developers; Signia Isles with Sunteck Realty Ltd; and Chennai-based BBCL Group’s investment in Thoraipakkam.

Apart from these, the fund manager sought an extension to exit its other six investments. These include its investment in Gurgaon Gateway/La Vida project with Sidhartha Group and Tata Housing; Altus Project with Ahuja Constructions; The Gateway (Varuna) project with Ozone Group and Vijay Raheja Design Construction, which is yet to be completed.

It has also invested in Kohinoor Group’s Altissimo project, where the fund’s exit has been delayed as the project was stalled due to proceedings for resolution under the Insolvency and Bankruptcy Code. The project has since resumed. Another investment, Golf Homes and Kingswood with the Amrapali Group, is under litigation in the Supreme Court. Its last investment, Eden Park project with L&T Realty and Pragnya Real Estate Fund, is under litigation too. The final decision on the case is yet to be awarded. Overall, one can safely assume these exits won’t happen in a hurry.

Regarding these cases, Balasubramanian, in the emailed response, says, “As on date, we have only one project, promoted by Amrapali Group in Noida, which is currently subjudice in the Supreme Court. The apex court has recently appointed NBCC, a government-owned construction company, to take over the project and begin the construction activities. We have been recognised as secured lenders with the Supreme Court.”

Over the years the fund has communicated to its investors that 54 percent of its portfolio had been invested in fixed-return transactions for a steady income. It invested 21 percent in structured equity, 25 percent in pure equity deals and the rest in debt. In its quarterly update in March 2018, the fund said that to unlock the full potential of its investments it had taken a final extension in 2017. Now, it has extended the fund again, without providing any timeline on final exits.

“The fund has now indicated final return timelines that stretch to March 2020 and it has been reducing the expected returns every time they communicate expected returns,” the investor adds.

Looking at the fund’s performance and its reasoning one would assume that real estate funds in general have found it difficult to return capital. However, according to data from NewsCorp VCCEdge, real estate fund managers have returned $2.7 billion to their investors in the last five years. In 2014 and 2015, fund managers returned $644 million collectively, whereas in 2016, general partners returned $703 million across 23 deals. In 2017, the amount exited by fund managers fell slightly to $574 million across 19 deals.

One can say that equity investments are subject to market environments and none of the investors were offered guaranteed returns. However, with only three full exits, the fund’s performance has been far from what investors would have hoped for. One of the reasons could be the high churn of fund managers at ABREF. It was launched by Shashi Kumar, who was one of the founding members of India REIT, a real estate fund promoted by the Ajay Piramal Group. Kumar stayed with it till May 2012, and deployed nearly 35 percent of the fund. Once he left, ABREF hired Apurva Muthalia to run the show. Muthalia quit in 2016, following which the group appointed Maneesh Yadav. Two years later, Yadav quit too. The fund is now led by Akshat Pandya who has been with the fund for the last five years.

“Real estate is a very involved play and if one is not actively engaged with the developers then the fund begins to struggle,” says a consultant requesting anonymity. “The fact that the fund managers kept changing impacted the fund’s relationship with these developers.”
*****

Over the last decade, real estate investing in India has changed substantially. In 2010, when the fund was raised, Indians still heavily deployed capital in Indian real estate. To top it, funds were still governed by Venture Capital Funds Regulations of 1996, wherein any investor could participate with a minimum of ₹25 lakh. It is only when small investors started defaulting and losing money that the Securities and Exchange Board of India came up with Alternative Investment Fund (AIF) guidelines in April 2012. AIF regulations mandated a minimum investment of ₹1 crore by investors and more participation by the fund manager. 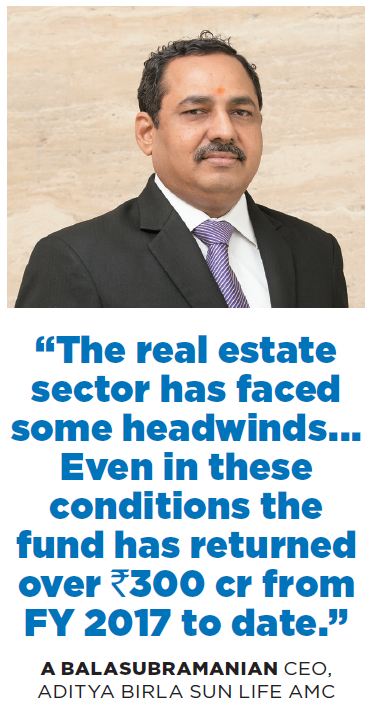 “A lot of investors in this fund are still small investors who are staring at losses. Moreover, the fund keeps extending its deadlines and the payouts are not on time. In fact, the fund has seen churn in terms of investors too as a lot of smaller investors were defaulting on their investments who were later bought out by large investors,” the investor adds.

Moreover, vintage funds from 2007 usually invested in larger projects and did equity deals, but as markets soared fund managers started investing in structured debt deals—where the developer raised money from investors at an 18 to 20 percent coupon rate but paid about 10 percent to begin with, while the rest would kick in after three to four years, or the developer would start paying the entire coupon after the third year of the investment. The developers also provided two to three times collateral against the loan.

“Over the last decade, investing in real estate has undergone a complete transformation, with risk mitigation taking precedence over returns. There is a high focus on project monitoring,” says Puneet Bhatia, director and head of real estate at Mirae Asset Global Investments (India). He refused to comment on the ABREF fund.  “The quality of data and information flow has improved and developers who have focussed to build professional teams, along with strong track records of execution, stand a much superior chance to attract capital,” he adds.

“The real estate sector has faced some headwinds, beginning with demonetisation in November 2016 followed by Rera and GST in July 2017. Even in these difficult conditions the fund has returned over ₹300 crore from FY 2017 to date. We are in the process of exiting the remaining investments and are confident that the inherent value of the investments is still intact,” Balasubramanian says.
*****

Meanwhile, even as the new fund manager struggles to exit the fund’s investments, ABREF is looking at raising a second fund, and is hiring junior resources.

“They have communicated that they are preparing to raise capital for their second fund as they see new opportunity in the sector. They have already raised some commitment on the back of the brand name,” says a person from the industry who was briefed by the fund managers of Aditya Birla Group.

On August 23 Business Standard quoted that the fund is raising $100 million. Forbes India could not ascertain the size of the fund and Balasubramanian did not comment on the fund raising activity.

As ABREF gears up for its second fund it remains to be seen how much money investors from its maiden fund will be able to make in the next two years, four years from its first extension.