Lessons for the global private equity giant from lending transactions that have gone sour in an era when governance levels have hit new lows. Two key takeaways: The need for more due diligence and a proactive, eagle eye on the debt portfolio 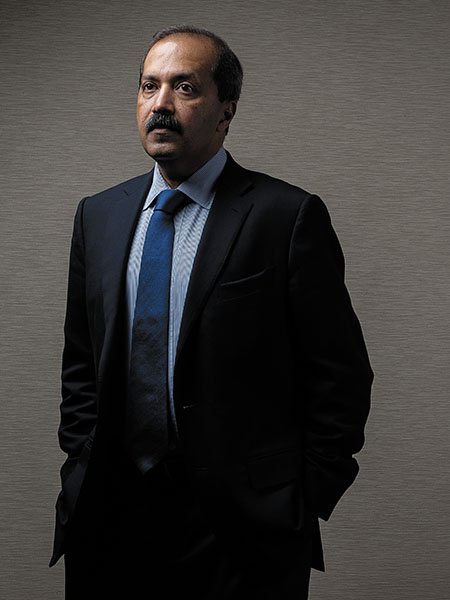 “Governance is a key area and, in this credit climate, we anticipate spending greater time looking at the governance aspects of a deal” - Sanjay Nayar, CEO, KKR India
Image: Vikas Khot

Over the last year, KKRIFS’s debt investments in companies like Kwality Dairy, CG Power and Industrial Solutions, and Coffee Day Enterprises Ltd have floundered. According to Forbes India estimates, the collective exposure to two credit investments—CG Power and CCD—stands at nearly ₹475 crore of KKRIFS asset book of ₹6,200 crore as of March 2019. It has completely written off its exposure in Kwality Dairy last year. The total number of loans and bonds on the books of KKR India Financial Services was under 50, with reported net non-performing assets at under 2 percent.

Last October, KKRIFS India took Kwality Dairy to the National Company Law Tribunal (NCLT), and has already written off the investment from its book. According to Kwality’s last publicly available annual report, for FY18, it owed ₹195 crore to KKR India.  In July 2016, the company had publicly announced that it managed to raise ₹520 crore from KKR India in a structured finance transaction for its consumer facing business. The debt-ridden company, which has eroded 98 percent of investor wealth in the past two years, is in NCLT awaiting its resolution. 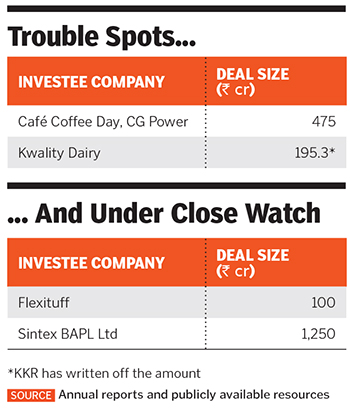 The Gautam Thapar-promoted CG Power and Industrial Solutions has also come under the scanner, with KKR India finally acquiring just under 10 percent in the company in mid-September by invoking its pledges. On September 17, the Securities and Exchange Board of India (Sebi) issued an order restraining Thapar from accessing the securities market.

Café Coffee Day, for its part, restated its debt in mid-August at ₹4,970 crore. It is in the process of selling non-core assets to reduce its debt obligations.

Other accounts on which KKR is keeping a proactive watch include Flexituff, Resonance Eduventures and Sintex BAPL Ltd. According to Flexituff’s 2018-19 annual report, it defaulted on ₹9 crore during the January-March period and has an outstanding loan of ₹100 crore, which is now payable till May 2021. The KKR NBFC had also invested ₹1,250 crore in Sintex BAPL, a subsidiary of the Ahmedabad-based textiles and plastics maker Sintex Group. Recently, the group defaulted on non-convertible debentures worth ₹112 crore to six undisclosed investors. The Sintex Group had earlier in June defaulted on an amount of ₹86 crore.

As the Indian economy struggles, the wholesale lending ecosystem has been facing a liquidity squeeze. With lending coming to a near standstill, companies are finding it difficult to refinance their loans. And with sales slowing down, their ability to pay off debt from operations is stretched.

For the past six months, KKR India CEO Sanjay Nayar has been setting aside time to keep an eagle eye on the NBFC’s credit book. This is in addition to his main responsibility of private equity. Clearly, there is a problem, but Nayar doesn’t think it’s time to ring the alarm bells.

In early January, Care Ratings rated KKR India Financial Services’ commercial paper worth ₹300 crore as A1 plus. The lending firm is a wholly-owned subsidiary of KKR Capital Markets India Pvt Ltd. In FY18, the parent infused equity capital of ₹640 crore, which resulted in a sharp increase in its capital adequacy ratio. 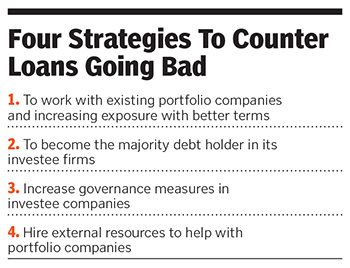 As the loan book grows, the provision and writeoffs also increased in FY18 to ₹22 crore from ₹9 crore in FY17 on account of additional provision of ₹17 crore on standard assets. The company reported profit after tax (PAT) of ₹196 crore during FY18 as against PAT of ₹213 crore during FY17, a drop of 8 percent.

In end-March, Crisil Ratings rated KKR India Financial Services’ bank loan facility of ₹3,400 crore as AA plus stable. According to Crisil, during FY19, there were three accounts that had turned delinquent. KKR India Financial managed to recover from one account and wrote off another during April to December 2018. Consequently, the gross non-performing asset (GNPA) metric stood at 2.4 percent (net NPA 1.33 percent) as on December 31, 2018. The company managed to recover from the third account in January post which, as on date, the GNPA ratio is nil.

Few of these PE giants would have foreseen what was to come. In recent times, related party transactions have become one of the perilous ways of siphoning capital from a company; this has caught investors off-guard and investors are now looking for ways to safeguard their interests. These incidences have also made global investors wary on the kind of due diligence investors needed before deploying capital in a company, especially debt, where they are a smaller participant in the entire pool of debt (vis-a-vis banks).

Nayar is now busy rebooting KKR’S corporate debt story that’s been a victim of fraudulent promoters and poor governance. But the turnaround isn’t going to happen in a hurry, and he needs to do more due diligence, and be more proactive with the portfolio.

To begin with, KKR is looking to change the way it does debt transactions in India. It now wants to be a significant lender in a firm. It wants to be more hands-on like a pure play private equity investor, far more involved and engaged including guiding the firms in capital expenditure assessments, alternate ways to raise capital, and monetisation of assets, among other areas.

As Nayar puts it, “We will move towards controlling debt stacks over time. And I think the banks will come along with us to sign up for inter-creditor agreements so that we are all in this together. I think we will do fewer deals but larger ones and control the debt stack.”

One of the reasons to become a senior creditor in the pool stems from the fact that if a company is headed to the NCLT, under the Indian bankruptcy laws it will have a say in the resolution process; most funds are not in such a position, especially special-situation and PE funds.

Then, there is the issue of governance, or the lack of it. “Governance is a key area and, in this credit climate, we anticipate spending greater time looking at the governance aspects of a deal,” Nayar says.

The firm is now looking at implementing similar measures for its debt investments that it usually practices for its equity transactions. Apart from heightening its due diligence processes, it is also looking to hire outside resources in terms of auditing, including forensic auditing and consulting, before offering large cheques in terms of debt.

Another strategy the firm is adopting for its existing deals includes recapitalising some of its existing portfolio companies with better terms in terms of both return ratios and increase in collateral and governance.

Nayar says that in credit businesses, market and business cycles are the norm, “as we have seen globally where we have $70 billion of credit asset under management. We consistently leverage our global expertise in order to structure credit investments in India through cycles. That gives us meaningful history and track record to shape our new investments.”

Nayar points out that KKR’s overall leverage levels have consistently been below 2x. “In terms of track-record, the firms has had stress in its portfolio in <10 percent of its executions life-to-date, by number and value.” The worry though is that, if the economic slowdown persists, the stress could well build up.

Tweets by @forbesindia
Chart: How the Saudi drone attack affected oil prices
The Auura : Creating a niche in luxury design