Sanjay Mehta: In bitcoins he trusts 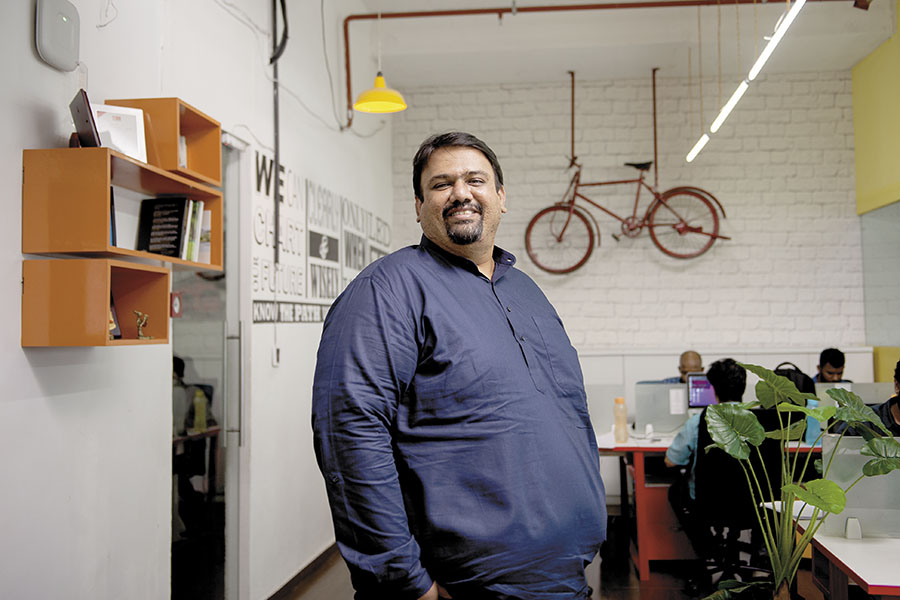 At a recent conference in New York, Jamie Dimon hit out at bitcoins. The CEO of JPMorgan Chase likened the volatility of the digital currency—which has fluctuated in value from just over $2 in 2011 to around $5,000 in September before dropping to around $4,300 at the time of going to press—to the tulip mania that raged across The Netherlands in the 17th century. At that time, the contract prices of the newly-introduced flower bulbs in the country reached extraordinarily high levels before crashing dramatically. “It is worse than tulip bulbs,” Dimon told a packed audience. “It could be at $20,000 before this happens, but it will eventually blow up. I am just shocked that no one can see it for what it is.”

Amid this drama, Sanjay Mehta remains unperturbed. The entrepreneur-turned-investor acknowledges the volatility around cryptocurrencies, but doesn’t believe that it is all fantastical hype. They, in fact, are the future of money, he says. Besides, that an investment-banking boss whose industry presided over the mortgage-backed securities bubble that led to the global financial meltdown in 2008 should say so is ironical.

An anonymous person invented bitcoin—the first cryptocurrency—in the aftermath of the financial crisis in 2009, spurred on by a lack of trust in traditional banking. Unlike fiat currencies that are minted by central governments, bitcoins are computer-generated and free from the control of any authority. So, by using bitcoins, people can bypass banks and traditional payment processes to pay for goods and services or transfer money to one another. Every bitcoin transaction is indelibly recorded on the blockchain—a kind of ledger or giant database that sits on tens of thousands of machines around the globe, managed by volunteers who track credits and debits.

“It’s still early days in crypto-investing and will be so till about 2020. So, this is the time to take risks and be bold,” says Mehta, who currently holds not just bitcoins but also a number of “altcoins”, or alternative cryptocurrencies, like bitcoin cash, peerplays, civic and EOS. His investment in the latter, done through an “initial coin offering” or ICO, where money for cryptocurrency-based projects is raised by selling digital tokens to investors in exchange for cryptocurrencies, has gone up by 300x. The “digital tokens” in this case are called EOS, which can be redeemed on Block.One, a platform that claims to provide end-to-end solutions to help bring businesses onto the blockchain.

We’re at a tony coffee shop in suburban Mumbai where Mehta has just wrapped up a meeting. The 46-year-old, who founded a series of startups, including his latest Maia Intelligence, a business intelligence provider that was acquired by Datamatics in 2015, is now a full-time angel investor. “It’s now all proxy-entrepreneurship for me,” he smiles, explaining that he gets to experience the thrills—and challenges—of entrepreneurship through the startups he has invested in. It’s also the kick of making a tangible difference that gets him fired up. “If I invest in listed equities or gold, all I can do is wait and see how the market reacts. But with angel investing, I can add value to startups and actually move the needle,” he says.

“ It’s still early days in crypto-investing. This is the time to take risks and be bold.

Take the case of AdStringO. The Mumbai-based startup’s compression software enables users to capture documents, images, audio as well as video content, and compress it by about 90 percent without any noticeable loss. The technology sits on a smartphone and works in low-bandwidth networks, making it especially suitable for banks and insurance companies looking to rope in rural customers through field salesmen. A technologist at heart—before Maia Intelligence, Mehta founded a software consultancy, a B2B commodity trade portal as well as Udyog Software to help users calculate their taxes—Mehta was quick to spot the potential in AdStringO’s algorithm, but found their pricing strategy faulty. When he put ₹5 lakh into the startup in 2012, he insisted that they switch from a fixed annual fee to a ‘pay per transaction’ model. The founder, Mohan Chandrasekaran, was initially sceptical because it would mean a loss of upfront revenue. “Pricing is crucial for making your product successful. We had a lot of discussions with Sanjay before arriving at the right price model,” says Chandrasekaran. Revenues trickled in initially, but as enterprises began to recognise AdStringO’s unique intellectual property (IP), money flowed in more predictably. The steady business model also helped AdStringO bag its next round of funding—$350,000 from the Indian Angel Network in 2015. Today, AdStringO is profitable and counts heavyweights like L&T Finance, Tata Teleservices and Reliance Capital as its clients.

“Angel investing is not just about money, it’s about smart money. You have to add value,” he stresses, adding that he got introduced to the concept through the Indian Angel Network (IAN) in 2011. Today, he’s not only a member of the IAN, but also a handful of other angel investing groups, besides taking on investments on his own. He looks for startups that have “a strong IP” so that a small amount of seed capital can go a long way in helping them scale. “Startups should not require large sums of money to become sustainable. The idea is to look for companies that can build businesses with that initial capital rather than going out to continuously raise funds,” he says.

The sectors he’s excited about include B2B tech-enabled businesses, medical device startups, media and entertainment, and the QSR space, among others. His average ticket size varies between $10,000 and $200,000, and he’s seen around 9x returns across his investments. One of the biggies was his 2012 investment in Oyo Rooms. Ritesh Agarwal’s room rental startup was called Oravel Stays at that time and was modelled on Airbnb, the online marketplace for vacation rentals. Mehta bandied together with other investors from Mumbai-based angel network Venture Nursery to put in the seed capital, which went up 280x by the time they exited in 2016.

Mehta’s penchant for picking the right startups—“I chose founders over markets and disruptors over differentiators,” he says—led LetsVenture, a marketplace that connects startups to angel investors, to confer upon him their ‘Best Angel Investor 2017’ award this March. “He’s a supportive investor. He thinks from the entrepreneur’s point of view,” says Shanti Mohan, co-founder of LetsVenture, adding that quantitative as well as qualitative metrics were used to arrive at a winner. Mehta also happens to be an investor in LetsVenture.

From giving a peek into his investing philosophy, he returns to the subject of cryptocurrencies. “I’m long and bullish on them. But never invest more than you can lose,” he cautions, adding that, for the moment at least, these alternative forms of money are more of an investment than a means to pay for goods and services. However, he believes that ICOs will change the way the venture capital industry works.

For instance, Filecoin, a blockchain-technology-based platform that offers decentralised cloud storage, raised $250 million earlier this year, making it the largest ICO to date. Based on a “white paper” that lays out the roadmap for the business—the equivalent of a prospectus in an IPO—investors bought digital tokens, known as “filecoins” in this case, in exchange for ether, a bitcoin rival based on the Ethereum network.  Filecoins can be traded or exchanged in return for the startup’s services. Already, the world over, hundreds of projects like Filecoin have collectively raised more than a billion dollars through ICOs. That’s still a sliver of the $127 billion raised through venture capital last year, but Mehta insists that ICOs are a “new fundraising phenomenon” that are here to stay.

Even so, challenges abide. In most cases, “digital tokens” are sold for businesses that are yet to be built—investors bet that the business will do well, people will flock to the platform and the tokens will grow in value. Moreover, the lack of regulations—like the securities laws that govern IPOs—makes ICO-related scams easy. “If you can’t find reliable information on a company, the technology and the promoters, move on. There are just too many other great opportunities out there to take advantage of than to waste time on potential scams,” says Mehta. He pauses, flashes a smile and adds: “There is never really a dull moment in the crypto space.”