Winds of change are blowing across boardrooms at family-owned companies. Over the last few years, several leading business groups are witnessing the emergence of the next generation of leaders who are not just stepping into key roles but also charting out their own distinctive paths. What is significant is that while these new generation leaders are taking existing businesses to new levels, innovating and adding value on their own steam, some of them are also branching out into newer territory which may or may not be directly related to the main business. 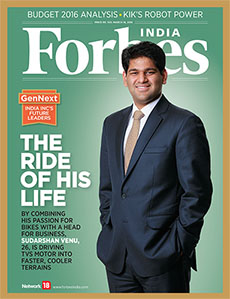 Given the increasing influence of GenNext in some of the biggest and most significant business families in India, we at Forbes India thought it was time to focus on a few of those who are making their own mark and creating value in the process. It is against this background that this issue, focusing on Generation Next of India Inc, has been conceived. The selection of young leaders we bring before you is by no means a list or a ranking; the aim is to provide snapshots of the change which many business families are witnessing by way of the emergence of new ideas and thought which this generation is bringing in. As Senior Assistant Editor Salil Panchal, the coordinator for this project, says, the men and women featured in this issue are already making a substantial difference to the fortunes of their family businesses.

Take Sudarshan Venu of the TVS Group, Nandini and Anand Piramal of the Piramal family, Anant Goenka of The Express Group or even Punit and Kulin Lalbhai of the Arvind Group. They are driving change from within and also charting out new areas for themselves. This is also significant in the context of the changing landscape, where the ‘old’ economy is rapidly yielding ground to new ideas, new technology and fresh perspectives, whether it is in emerging digital businesses or harnessing technology to power existing businesses. These young leaders have demonstrated the will and the ability to think differently while remaining loyal to the values and culture of the business families to which they belong. As EY India boss Rajiv Memani puts it, “These leaders are trying to figure out what creates value in India and what creates value globally.” Memani adds that many of them tend to seed businesses which are service- and technology oriented.

This issue also carries an analysis of the Union Budget 2016, where Finance Minister Arun Jaitley has sought to provide a major push to the infrastructure sector, revive rural demand and make India’s tax regime predictable. This, even while sticking to the path of fiscal prudence.