Think of the $40 billion Aditya Birla Group and the first impression is of a giant, diversified, manufacturing-led conglomerate, with operations spanning 36 countries. From metals to cement, carbon black to fertilisers and telecom, the group straddles numerous large businesses with growth plans being given shape for each. 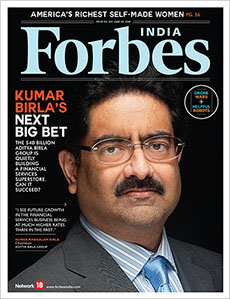 But shift the spotlight a bit, and another strategy is quietly playing out—that of building a financial services superstore, which hawks a range of financial products and services and is just short of being a bank. Indeed, Kumar Mangalam Birla, the soft-spoken 48-year-old chairman of the conglomerate, concedes that he was hugely disappointed at not being given a banking licence by the RBI when the group applied for one in 2013. But, as Birla tells Forbes India in this issue’s cover story, one has to move on. And moving on he is, putting in place the various pieces of a major financial services game plan to capitalise on the growth prospects of the Indian economy.

The seeds of this plan have already been sown and the group has travelled some distance, morphing from a middling player with five business lines in 2007 to one which now straddles eleven segments within the financial sector; it also contributes 30 percent to group holding firm Aditya Birla Nuvo’s revenues and 35 percent of its net profit. Along the way there have been hiccups; controversy hit the group in 2010 over allegations of mis-selling of derivatives products. But Aditya Birla Financial Services Group (ABFSG), the group-within-a-group, has put that behind it and is looking to chart a serious growth plan, one which Birla is very bullish on. “Financial services is one of the group’s fastest-growing businesses,” he says, admitting he has always been fascinated by the sector.

Building such a powerhouse, however, won’t be easy. Financial services is a hugely competitive sector. Besides, the areas in which the group has managed to grow—NBFC, mutual funds and insurance—have all been around for a while. The real test will be whether it can scale up new businesses like housing finance and health insurance. Equally important will be whether Birla will be able to give enough group management bandwidth to financial services as his other (non-financial) businesses grow. Either way, it will be an engaging story to track.

This issue also brings you the first ever Forbes listing of America’s Richest Self-made Women, a lineup of some of the most inspiring success stories of our time. This spanking new list adds to the existing one on the World’s 100 Most Powerful Women, which has four names from India. If there was any evidence needed of growing woman power, these lists are it.

Tweets by @forbesindia
Which are the world's top companies?
Sepp Blatter's exit opens a can of worms for FIFA