Ringing in the next ecommerce wave

With the marketplace model getting crowded, differentiation will now be the key to success

Over the past few years, there’s been a perceptible change on the front pages of the newspapers, the ‘pink’ business papers in particular. The stories on the traditional brick-and-mortar businesses are gradually yielding space to the new brat pack, the ecommerce entrepreneurs and their businesses, many of which are turning conventional business wisdom on its head and changing the rules of the game. As the internet dominates the way in which Indians connect, share and now shop, ecommerce has become the next big thing. Consequently, the big home-grown marketplace majors like Flipkart and Snapdeal are slugging it out with global giant Amazon and drawing out new strategies to woo the consumer. Whether it is through deep discounts or deals, the ecommerce big boys are currently spending all their energies in attracting consumers, changing their shopping habits, hoping that profitability will be next. An Assocham-PwC study has pegged the Indian ecommerce sector at $17 billion currently, expecting it to grow at a sharp 35 percent CAGR, touching $100 billion in five years. Flipkart and Snapdeal are already multibillion dollar businesses, and growing. 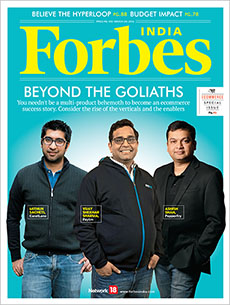 But probe a little deeper, and there’s the niggling issue of when profitability will really come, and whether all this is really too much hype. Now that the marketplace model has garnered huge amounts of funding, is there space for more players, or will the next wave of ecommerce players be different? While some of India’s top ecommerce players and investors debate the issue of profitability, our team of writers have put together details of how another set of ecommerce entities is successfully moving ahead in specific verticals—be it in the areas of jewellery etail, food apps, aggregation of taxi services, real estate, automobile classifieds or movie and event tickets—and gaining traction with investors in the process. With the marketplace model getting crowded, differentiation will now be the key to success.

This issue of Forbes India also analyses aspects of Finance Minister (FM) Arun Jaitley’s Budget 2015, a document which many believe will set the stage for India to achieve a higher growth momentum in the years ahead. Viewed in totality, Jaitley’s Budget did not disappoint, addressing many of the pain points in the economy. The FM also gave himself a little bit of leeway on the fiscal deficit target, relaxing it to 3.9 percent for FY16 from the earlier figure of 3.6 percent, in order to ensure greater public investments in infrastructure and boost growth. In fact, infrastructure emerged quite clearly as the big theme of Budget 2015 as we delved deeper into a significant Budget speech.

Tweets by @forbes_india
Ethical indiscretions and missteps: The slippery slope is all downhill
Budget 2015: Paving the road to higher growth