Street cred: Divine's rise to the top of the charts

From the slums of Mumbai, Vivian Fernandes has risen the ranks of rap to straddle both indie and Bollywood 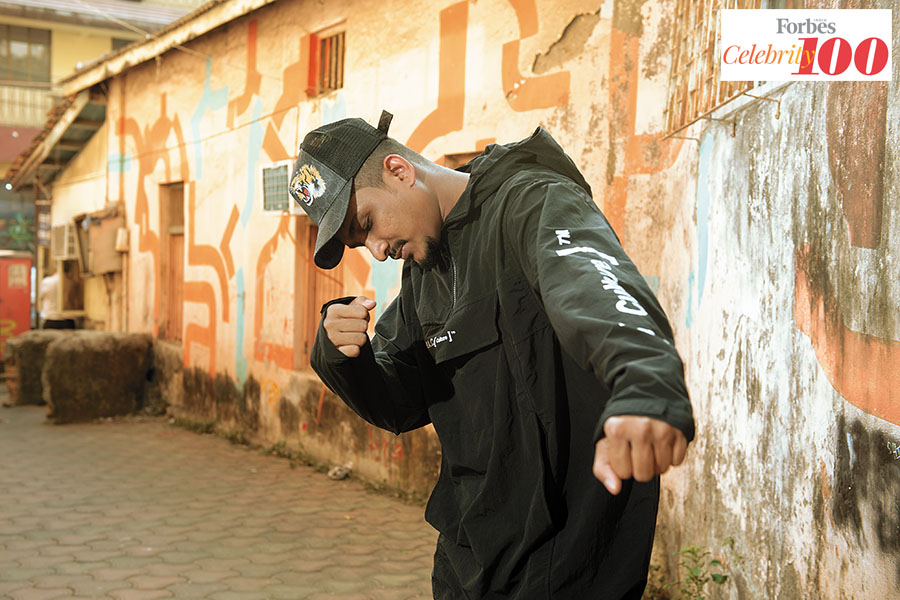 A movie based on rapper Vivian Fernandes’s life is slated to release in February 2019
Image: Mexy Xavier

This is the stuff of movies.

In 2002, a teenager and his older brother moved in with their grandmother, into the slums of Mumbai’s JB Nagar. Their abusive father had left them, and their mother had moved to the Middle East in search of a livelihood. In a life devoid of television, the only form of music the boy ever heard were Konkani folk tunes, and the local bands that kicked up a frenzy during festivals. One day, he saw a passerby wearing a T-shirt with an unfamiliar face printed on it. A friend pointed out that it was American rapper and song-writer 50 Cent. The same friend then took the boy home, and burnt more than 60 hip-hop tracks onto a CD and gave it to him.

Cut to the summer of 2018. Netflix releases its first original series in India, Sacred Games. As Saif Ali Khan, Nawazuddin Siddiqui and Radhika Apte negotiate their way through Mumbai’s underbelly, playing in the background is the title track ‘Kaam 25’, a befitting, hard-hitting, hypnotic rap that captures the essence of the eight-episode thriller. It is perhaps equally befitting that the teenager from JB Nagar—now a 28-year-old Vivian Fernandes—is the one who composed and performed the song.

It is difficult to associate Fernandes, sitting in a black hoodie and his signature cap, with the rapper aggressively mouthing the gritty lyrics of ‘Kaam 25’. “When I made ‘Kaam 25’, I had no idea if it was going to do well. I don’t make tracks with the intention of breaking the internet. I thought it will die down after the series ends, but it’s playing everywhere even now,” he says. The track has got more than 5 million views on YouTube in the five months since its release.

But garnering millions of views for his compositions is not new for Fernandes, who goes by the stage name Divine. His 2013 home-made song video, ‘Yeh Mera Bombay’, was shot on the streets of Mumbai, and won the best video award for the year from Rolling Stone India; it has 1.4 million views so far. But what put him on the road to fame was the 2015 track ‘Mere Gully Mein’, which he wrote with co-rapper Naezy; the video has been viewed more than 8.8 million times. His next collaboration was with electronic dance music (EDM) artiste Nucleya on a track called ‘Jungle Raja’, which released in 2015. In the same year, Fernandes was signed on by Sony Music, which remained his manager till 2017; his single ‘Jungli Sher’ has been viewed more than 8.2 million times on YouTube, and it is the first single by an Indian artiste to be release by Apple worldwide.

Fernandes, who once struggled to understand the English words of the rappers he hoped to emulate, not just by singing like them, but even dressing like them, has evolved over the years.

While studying at National College, he was often called a wannabe for his tastes, but Fernandes’ attention lay elsewhere. He began by rapping in English for three or four years, since there wasn’t much being composed in any vernacular languages in the mainstream. “I started writing in English, although I wasn’t very good,” he says. “I say the same things now, but it sounds good because it is Hindi. Even earlier, I was thinking in Hindi but writing and rapping in English. Changing that made a lot of difference.” However, rapping in Hindi also proved to be a tough task, since he had grown up listening to English rap and had to create his own style.

Fernandes’s shift away from English fortuitously coincided with the rise of artistes such as Naezy, Dee MC, D’Evil, Enkore and collectives such as Mumbai’s Finest, Bombay Bassment, Bombay Lokal and 7 BantaiZ, who have revolutionised the desi hip-hop music scene over the past three or four years. Almost all of them started off by making videos of themselves rapping on the streets, and then gaining enough popularity to make commercial hits. Fernandes believes that technology has been a game changer, giving young children a platform to showcase their talents. “There are so many kids now, who are rapping in every corner across India, in their own mother tongues,” he says.

“The rise of Indian hip-hop was inevitable. The rhythmic spoken word has a lot of power to move people—physically and emotionally,” says Uday Benegal, lead singer of Indus Creed. “It was always meant to transcend the boundaries of language. So I foresee hip-hop’s ascendance in multiple Indian languages.”

Fernandes had started out by listening mostly to Gospel rap, which is how he realised the positive side of hip-hop, and which inspired his stage name. “I kept listening, and my mind kept changing. I thought it was beautiful the way in which a hip-hop album with so many stories and life experiences was put out. For the first time, I saw the good side to it, apart from the slangs and crass fashion.”

For every artiste, lyrics hold a different degree of importance. But for Fernandes, lyrics are what helped him understand his music; it was as though each artiste was talking about what they were going through. “I am a strong believer in hardcore lyrics, with a lot of punch lines, similes, and metaphors. I like to keep my lines simple. For me, the lyrics are the most important part.”

However, he also believes in maintaining a balance between the words and the melody. “When I am writing a track, I make it a point to give the producer some idea of the direction in which it is going, and then I leave it to them to take it wherever they want. Usually, I prefer to work with two people on each track; the collision of the two energies put together gives a different kind of vibe,” he adds.

Technology has given kids a platform to showcase their talent


Bollywood seems to be waking up—again, after a brief period of dabbling in the 1990s—to the potential of rap and hip-hop. Consequently, music composers are using them in short bursts within originals or remixes. So, you have the likes of AR Rahman using it in ‘The Humma Song’ (OK Jaanu), Amaal Mallik and Badshah using it in ‘Kar Gayi Chull’ (Kapoor & Sons), Prem Hardeep and Badshah using it in ‘Kaala Chashma’ (Baar Baar Dekho), and Raftar and Girish Nakod using it in the title track of Andhadhun.

The last year has really brought Fernandes to the limelight within the Hindi film industry with a few big-ticket collaborations. He debuted with the track ‘Paintra’ for Anurag Kashyap’s film Mukkabaaz, and collaborated with Amit Trivedi on the track ‘Badla’ for the Irrfan Khan-starrer Blackmail. And unlike the more common practice of rap being used only for a few lines within a composition, these tracks remained true to Fernandes’s style and essence. “Bollywood is not my big goal. The collaborations that I have done in Bollywood so far are largely because these were the right tracks,” he explains. “Even in Bollywood, I am putting out music that I want to put out.”

While making music, he no longer keeps the audience in mind; he focuses entirely on his music because there is already an audience for him.

Divine’s YouTube channel has close to 500,000 followers, and almost all of his videos have more than 2 million views each. His Instagram page has 311,000 followers and he has 144,000 followers on Twitter. Fernandes earned ₹12.62 crore last year, through music festivals, corporate shows, endorsements and a documentary that is being made about him.

“Three years ago, [film director] Zoya Akhtar walked up to us at one of our shows and wanted to understand the hip-hop scene better,” says Fernandes. The culmination of that meeting is the film Gully Boy, based on the lives of Fernandes and Naezy, starring Ranveer Singh, which is scheduled for release in February.

What does Fernandes think has been his greatest achievement so far? Getting his mother to quit her job in the Middle East and return home.

Tweets by @forbes_india
Governments putting pressure on central banks nothing new: KKR's Henry Kravis
6 Tips to be a better manager/coach