Rangan set up Goodmylk to make plant-based milk affordable in India. Apart from milk made of cashew and oats, it retails vegan yogurt, mayonnaise and butter made from vegetable oils 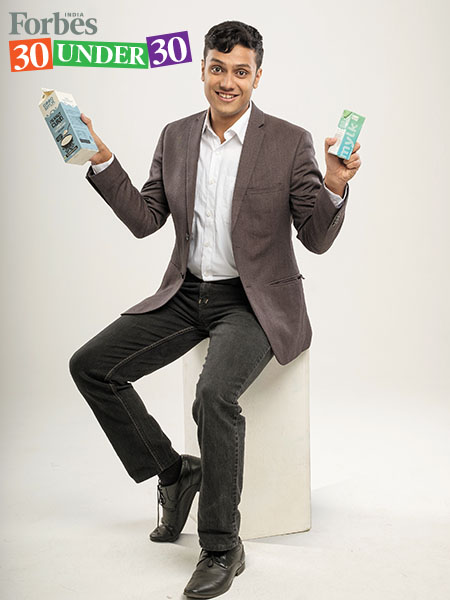 A special mention on the 2019 Forbes India 30 Under 30 list, Abhay Rangan, who started as an animal rights activist at 16, founded Goodmylk with his mother to make plant milk affordable in India. He also made it to Forbes Asia’s 30 Under 30 list last year.

In the past year, Goodmylk raised its Seed 2 round worth ₹3 crore from investors, including Elisa Khong, Sandeep Singh, Ginni International Ltd and its first venture capitalist partner, VegInvest. This brings its total capital raise to ₹5.5 crore, allowing it to launch as a direct-to-consumer company, with retail presence in Bengaluru, Chennai, Hyderabad and Mumbai. “We have built a highly accomplished team of 17, and have created many exciting institutional partnerships,” Rangan says.

While many players make vegan milk, Goodmylk is one of the few that has ventured into more product lines. It retails milk made of cashew-oat, a creamy curd made of peanuts, vegan mayonnaise that is trans-fat and cholesterol free and butter based on vegetable oils.

At ₹120 for a litre, Goodmylk’s product is roughly double the price of regular milk tetrapacks, but it claims to have a shelf life of six months from the manufacturing date, if unopened. “We hope to bring the price closer to milk once we achieve economies of scale,” Rangan adds.

Goodmylk’s earliest investment, worth $400,000, came from Texas-based vegan angel investor Stephen Sturdivant. “When I found out Goodmylk’s founder was an animal rights activist like myself, I knew he understood why we must do more to help stop the exploitation of animals,” says Sturdivant. “It’s time we invest in companies like Goodmylk, whose vision is to help build a kinder world.”

“Considering a large number of Indians are lactose intolerant, Goodmylk has potential,” says Ravi Wazir, founder and CEO of Phoenix Consulting, a consultancy for food, retail and hospitality startups. “While price could be a barrier, customers could soon be opened up to an entire range of vegan products. The hope is that the market will embrace it in large enough volumes to make money.”