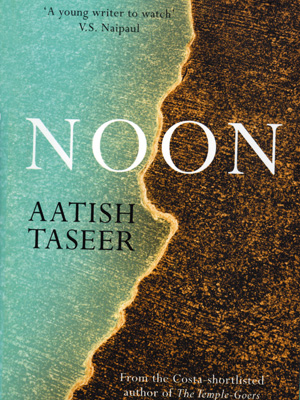 Noon is the story of Rehan Tabassum and his discovery of an India he is not familiar and comfortable with and a Pakistan he did not know.

As a young boy, Rehan comes to India with his Punjabi mother Udaya, after his Pakistani father Sahil abandons them in London. Udaya marries Amit Sethia, an ambitious businessman eager to grab by the collar every opportunity that a rapidly changing India offers him.

Growing up in the shadow of Sethia’s rapidly expanding wealth, Rehan attends college, quite aimlessly, in the US and decides to spend a summer in his step-father’s farmhouse in a half-hearted effort to dig out the writer in himself. In the house that sits on the fringes of the country’s burgeoning capital city and the vast hinterland that surrounds it, he is confronted with a robbery and, through the sham of a police investigation, the realities of a corrupt and caste-ridden society. His sensibilities and conscience prick with the guilt of realisations, as he finds himself seamlessly slipping into roles he did not think himself capable of performing.

When the knowledge of the effects of his decisions becomes too heavy to bear, he does what he seems to do best, take flight.

The other half of Rehan’s story is told in Port Bin Qasim, Pakistan, where he goes to meet and bond with his half brother Isffy. He discovers the intricate politics of power and inherent violence in the dealings within his father’s family, against the backdrop of a society torn by the lack of identity. From here too, after having played the role of a silent spectator largely and then a crucial messenger, he takes flight.

It seems that Aatish Taseer is more eager to hold a mirror to myriad issues that India and Pakistan chose to shy away from rather than tell a good story (the part where an ageing Sethia meets the grand-daughter of an erstwhile ‘rajmata’, now in dire financial conditions, as a masseur in New York appear carefully contrived). As a reader, what you see in the mirror Taseer holds is nothing new either. If you have read Hanif Kureshi, Mohsin Hamid and Aravind Adiga, you already know what Noon is trying to show. And they have shown it better.