The best food served on a (mid-air) platter 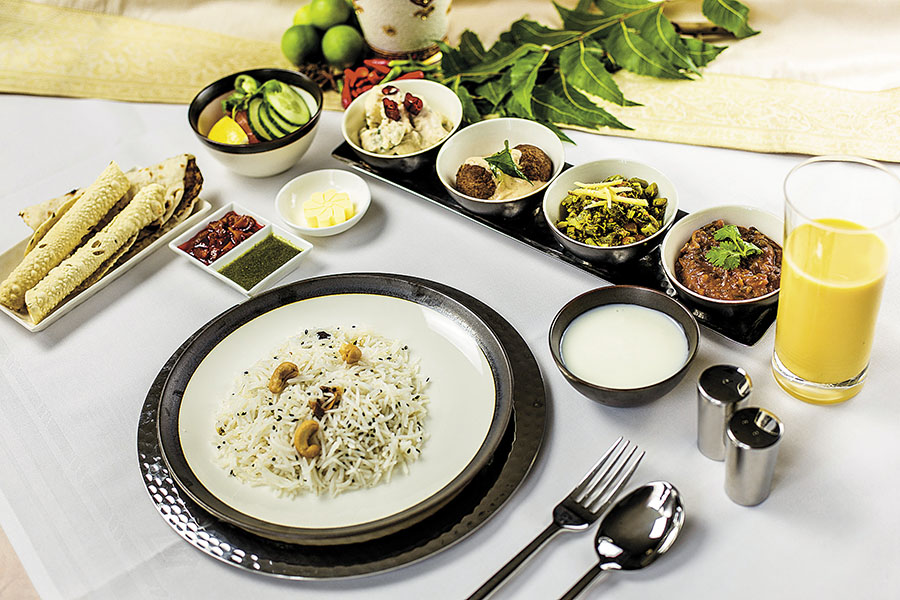 The Shahi Thali, first designed by Sanjeev Kapoor as part of Singapore Airlines’ first class dining, has since been replicated by other airlines
In 2009, advertising executive Oliver Beale shot to global fame after his letter to Richard Branson, owner of Virgin Airlines, complaining about the airline’s food went viral. The 29-year-old executive hilariously described the food he was served on a Mumbai-Frankfurt flight, writing, “What is this? Why have I been given it? What have I done to deserve this? And, which one is the starter, which one is the dessert?”

Along with photographs of the food that was served, the letter goes on to say, “You don’t get to a position like yours, Richard, with anything less than a generous sprinkling of observational power; so I know you would have spotted the tomato next to the two yellow shafts of sponge on the left. Yes, it’s next to the sponge shaft without the green paste. That’s got to be the clue hasn’t it? No sane person would serve dessert with a tomato, would he? Well answer this Richard, what sort of an animal would serve a dessert with peas in it?”

The letter attained such notoriety that not only was Branson “laughing his head off” at it, but he also called up Beale and the two “had a good laugh together”.

It also inspired theatre and film actor Rajit Kapoor to enact a skit (staged at Prithvi Theatre, Mumbai in 2013) where he recites an open letter to the owner of an airline about the miserable food that he was served on a flight (accompanied by large photographs of the said miserable samples).

That airline food rarely leaves passengers hungry for more is universally accepted. Nothing tastes quite right: What should be tasty is bland, what should be juicy is dry, what should be moist is crumbly. Even tea and coffee are not spared. But it would be too convenient to simply blame the chef.

Cruising at 35,000 feet above sea level comes with its side effects. Namely, a pressurised cabin that dulls taste buds, white noise that adds to this dulling, cool and dry ambient air that not only dries our nose (and even causes it to bleed) but also hampers our sense of smell. The same ambient conditions cause food to rapidly go cold, dry up, or even crumble, while reheating might make things worse.

There are also factors such as flight timings (how good would food taste if we are sleep deprived, bone-tired and cranky?) and flight durations (long hours of storage does no good to most cooked dishes), and the issue of mismatch between a flier’s preference and familiarity with the food served on a particular flight. For instance, “the two yellow shafts of sponge” that Beale writes of in his letter could look like two slices of dhokla to someone familiar with Indian food. To cater to the preferences of different fliers, airlines need to have enough food options, without going overboard on quantity because there is always a space crunch and weight limit that has to be considered while operating a flight kitchen.

So, now that we know what can go wrong, how do some airlines still manage to serve gourmet food in their business class and first class sections?

The first step is to collaborate with some of the best chefs in the world. For instance, the international culinary panel of Singapore Airlines, one of the highest-rated airlines for in-flight dining, includes Sanjeev Kapoor, one of India’s best known culinary experts, along with Italy’s Carlo Cracco, owner of restaurant Ristorante Cracco that has two Michelin stars, Japan’s Yoshihiro Murata, a kaiseki master, whose restaurant has been awarded seven Michelin stars (the highest in Japan), and Suzanne Goin, chef and owner of three award-winning restaurants in the US. 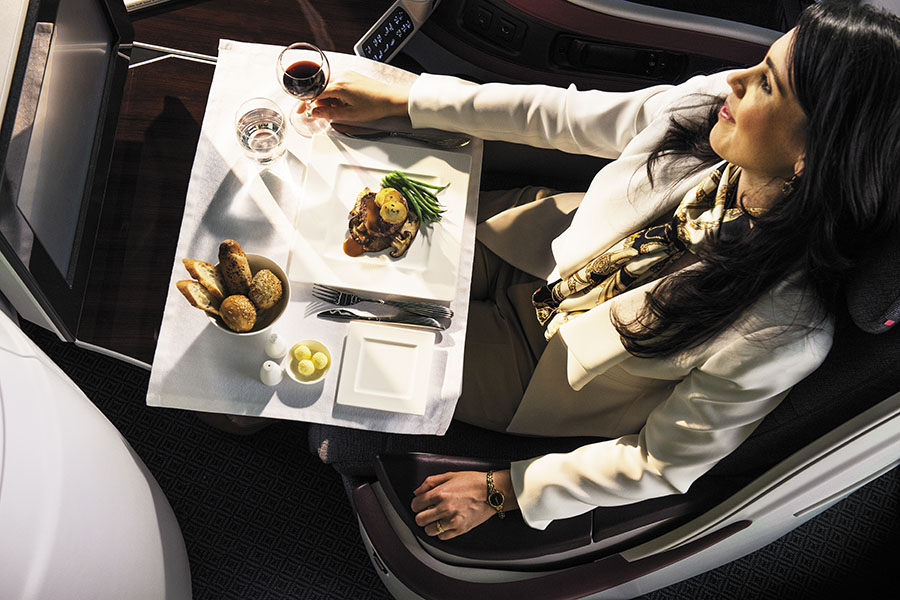 There is always a space cruch and wight limit to consider while designing a flight menu
Qatar Airways, whose in-flight dining experience is also rated as one of the best, has a partnership with Nobu Matsuhisa, famous for his Nobu and Matsuhisa restaurants.

“We have a team of in-house chefs who work closely with our catering providers around the world and our cabin crew to provide exceptional dining as part of our multiple award-winning business class service,” says Rossen Dimitrov, senior vice president, customer experience, Qatar Airways. “Our team of experts takes into account the flavours, textures, aromas, taste and presentation of the dishes to ensure they create a memorable dining experience.”

“It is really no rocket science,” says Kapoor. “There are known factors, [such as cabin temperature, pressure and humidity levels] that you work around.” For instance, he says, you know that the food on the menu will first be cooked, then frozen and then reheated in-flight. “So, gravies are good as they inherently have moisture that prevents the food from drying up,” he adds. “Indian food is lucky that way.”

Food items that change form with freezing and reheating, or those that need very high temperatures to reheat, cannot be used. A lot of ingredients tend to become dry, rubbery, limp or change colour when they are reheated. For instance, leafy greens like spinach won’t retain their bright green colour, prawns might get chewy and deep-fried food like potato chips will not remain crisp.

Similarly, the food will need to be seasoned more than usual in order to heighten flavours and aromas, which will compensate for the 30 percent reduction in taste sensations. “But you also need to take into account that you are serving different kinds of flavours in an enclosed space,” adds Kapoor, which means you would not, ideally, want the cabin to overwhelmingly smell of any particular food item.

Menus are also designed keeping in mind flight routers and timings. “Singapore Airlines had conducted a research some years ago, in the Indian cities from which it operates, to find out what fliers prefer to eat. We learnt that when people are going away from their homes—on a holiday or business trip—they prefer more elaborate meals that are reminiscent of restaurant food,” says Kapoor. “However, when they are returning home from their trip, they prefer home-style cooking.”

With this piece of information, Kapoor had designed the Shahi Thali that was part of Singapore Airlines’ first class dining on Indian routes, which has since been replicated by other airlines. “We even had to research the clay pot in which the curd was served so that it does not add significantly to the total weight of the dish,” he says. Training catering and cabin crew members in plating and presentation is equally important.
“Photographs of each dish are given to staff members so that they know exactly how the food should look and how it is to be served,” Kapoor tells Forbes India. It also needs to be kept in mind that there are limitations when it comes to the use of cutlery and space, both while serving and eating.

“We also learnt [from the research] that people are not averse to having a mix of different cuisines on their trays,” he says. “For instance, you could have chicken cooked in Andhra style, along with kofta in gravy, which is North Indian.” Fliers are also open to experimenting with desserts, and are happy to go beyond the standard gulab jamun. 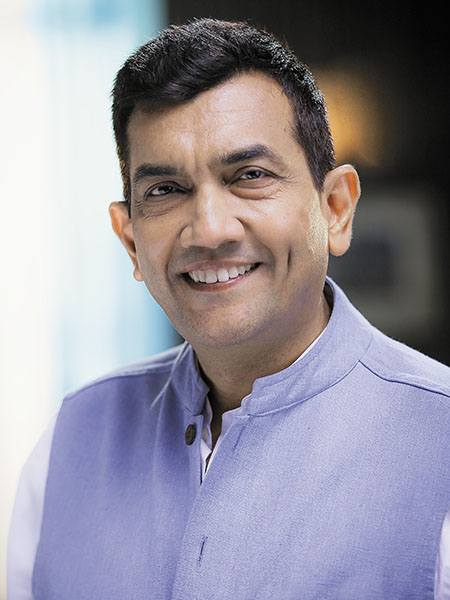 “Singapore Airlines ensures that local delicacies are offered on board not only for the travellers’ comfort of having home-style food but also for beginning their experience to the destination, from the time they board,” says David Lim, general manager, India, Singapore Airlines. Consequently, Ming Jia Zhen Zhuan will be served on Chinese routes, Shahi Thali on Indian routes and Kyo-Kaiseki (available in first class and suites) and Hanakoireki (in business class) on Japanese routes.

But the menu that has thus been designed needs to pass the taste test. “We test all our chefs’ creations under pressure, literally,” says Lim. “We bring their dishes into a simulated pressurised cabin, and spend hours there, sampling and adjusting the flavours, so our food can taste its best at 35,000 feet.”

Customer feedback is a crucial channel of information on works such as in-flight dining. However, often, it is not ‘feedback’ but booking requests that help airlines know what their guests want to eat. Passengers, especially on long-haul flights, often fill in their dietary preferences while booking their flights, feeding in more information than simply ‘vegetarian’ or ‘non-vegetarian’. “This makes it easier for airlines to decide on the dishes they plan to serve on a specific flight,” says Kapoor.

Flight routes and timings also decide what meal (breakfast, lunch or dinner) or snack is being served in-flight. For instance, as Dimitrov says, “The range of dishes on our menu is also selected to meet the needs of our passengers who may be travelling through multiple time zones, so that they may choose from a variety of options, from formal dining to light bites or snack options.”

Kapoor, for instance, who had just boarded a morning flight from Mumbai to Abu Dhabi while speaking on the phone for this article, picked up his menu only to find that it was for lunch. “I actually want some breakfast,” he says. “For a 10 am flight, we have to be at the airport by 8 am, which means I have to leave home by 7 am. Yes, I could possibly eat something at the airport lounge, but everybody may not have that option.”

The fact that airlines often end up serving food according to their own functioning rather than what the flier would want to eat, is something that needs to change. “I guess it is still an evolving process,” he sighs.