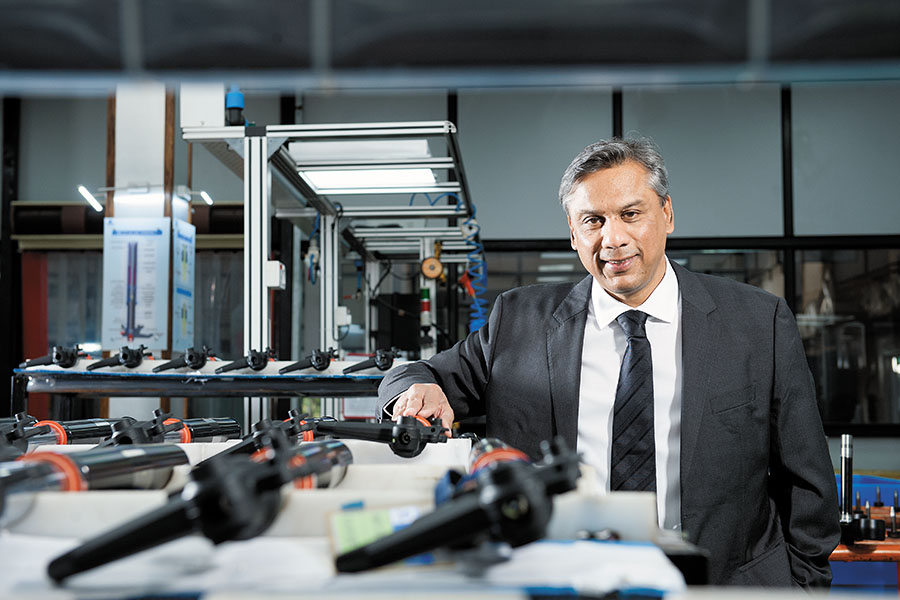 Anurang Jain, with a net worth of $1.5 billion, has debuted on Forbes’s The World’s Billionaires list at rank 1561
Image: Mexy Xavier


In the ten years to 2005, Anurang Jain and Endurance Technologies were on a roll.

A rapidly expanding market for two-wheelers saw the company increase revenues by a staggering 50 times to about ₹500 crore over those ten years. Endurance Technologies, which had started two decades earlier as an aluminium castings supplier to India’s second largest two-wheeler company, Bajaj Auto, had come a long way. Jain was grateful to the Bajajs of Bajaj Auto for their backing during the initial years (Jain’s mother, Suman, is Rahul Bajaj’s sister) and quickly moved to enlarge the product footprint.
He’d expanded the base of products to include shock absorbers, front forks, clutch assemblies and disc brakes. Importantly, they had been developed by Endurance alone and were its proprietary technology. An expanding national footprint meant that they could serve virtually all two-wheeler companies in India.

Click here: Twin-win venture: How Tarang Jain built a global automotive business
But as he surveyed India’s automotive landscape circa 2005, Jain, now 56, was also acutely aware of the need for a pivot. At 95 percent of sales, the business was heavily dependent on Bajaj Auto. “We realised that we needed to further diversify our customer base,” he says. Simply put there was a limit to how rapidly Bajaj Auto could grow and what had taken Endurance to ₹500 crore would not take it to ₹5,000 crore. Just as setting up the business in 1985 in Aurangabad had tested Jain’s mettle, making the company a top league auto component maker would prove to be another test—a sterner one.
A little over a decade later, it’s clear that Jain has passed the test with flying colours. For good measure, for the first time, Jain (along with brother Tarang) finds himself among Forbes’s billionaires (one of 119 Indians) with a net worth of $1.5 billion.

Endurance has joined the acquisitive list of Indian auto component makers that have successfully sought incremental growth outside India. Companies like Bharat Forge and Motherson Sumi have gained access to new technologies and customers and also reduced their dependence on their home markets. In the last decade, it has proven to be a tried-and-tested mantra for entering the big league. Not only has Endurance surpassed the ₹5,000 crore mark in revenue, it has successfully completed acquisitions in Italy and Germany giving it access to a wider set of customers—Audi, Porsche, Renault, Peugeot and BMW, in addition to Indian two-wheeler makers.

Jain also led Endurance through a successful listing in October 2016. Since then, the company’s market cap has more than doubled to ₹18,000 crore. With a strong roster of customers, the market expects the company to continue to compound revenues handsomely and has priced the business at over 50 times its March 2017 earnings of ₹330 crore.

The last decade has seen the company compound revenues at 26 percent a year and as a report by Motilal Oswal explains, with its foot in the door, Endurance still has room to increase the range of products it supplies to two-wheeler makers. For instance, while it supplies clutch assemblies to Bajaj Auto and Royal Enfield, it is yet to sell them to Hero MotoCorp and Honda Motorcycle and Scooter. “I expect their growth to be faster than the industry on the back of ramping up by Hero MotoCorp and Honda,” says Jinesh Gandhi, senior vice president, equity research, at Motilal Oswal. Jain, on his part, is a little more circumspect, “with uncertainty being the new normal, 8-10 percent growth is all I can promise”, he says. While it’s certainly a number he’s happy with, he’s also confident that’s a number investors would be more than happy with.

The Jains’ journey in the automotive business happened partly by chance and partly by design. Their father had retired as managing director of the Bajaj-owned Kaycee Industries.

After Anurang Jain’s graduation from Sydenham College in Mumbai, the family was on the lookout for a manufacturing business to enter when the Bajajs suggested aluminium castings to cater to scooters manufactured at its plant in Waluj, Aurangabad. (Anurang Engineering Pvt Ltd was later renamed Endurance Technologies while Varroc Engineering was started in 1990. The businesses were formally split in 2002.)

Anurang Jain led Endurance through a successful listing in October 2016. Since then, the company has more than doubled its market cap to ₹18,000 crore

The only abiding memory that Jain has about the first ten years is how hard it was for the company to achieve any size and scale. He describes them as great learning years. What helped him was the fact that because the company had been set up in Aurangabad, the government gave them a ten-year rebate on sales tax (the tax was collected but only deposited with the government after ten years) and that became an interest-free advance. “That was our initial cash flow,” recalls Jain.

While the aluminium castings were made to order, Jain realised that from a long-term perspective, it would be best if Endurance owned the technology as well. In order to do this, Jain entered into collaborations and joint ventures. New products—shock absorbers to front forks and clutch assemblies to disc brakes—were rolled out after testing them under Indian conditions and since Endurance owned the technology, it could also cater to the lucrative after-market business. Jain also used this time to develop his own tool room that allowed him to make molds in-house and reduce the time it took to develop products. In addition, Jain decided to take his India business where his customers are and plants were set up in Gurugram and Chennai.

Around 2005, Endurance had successfully crossed several bumps and Jain prepped for the next leg of growth. He decided to stick to his first product segment, aluminium castings, and scout for companies that were financially strong and had a good customer base. In 2006, Endurance acquired the German company Amann Druckguss GmbH and a year later, it bought Fondalmec SpA & Fondpress Srl in Italy. Both were high quality companies, the former owned by a private equity fund and the latter by a family where there was no clear succession plan.

While the acquisitions reduced the dependence on Bajaj from 95 percent of sales to 56 percent (it is 35 percent at present), they involved considerable leverage with the debt-to-equity ratio rising to 4:1.

Jain admits he was caught unawares by the Lehman crisis. Sales in Germany were down by 40 percent while Indian sales had dipped by 25 percent and the company had to reschedule its loan repayment cycle.

In the years since, Jain’s single-minded focus has been on improving efficiencies and making sure that Endurance’s growth is profitable. He’s consolidated plants—down from 19 to 16 and now back up to 26—outsourced component manufacturing to smaller suppliers and formed the Endurance Vendor Association. This has allowed the company to reduce its capital expenditure spends and at the same time maintain a watchful eye on quality. Net debt has since been brought down to a manageable 0.18 times equity and Jain alludes that this time he would be more cautious before taking on such high debt levels. There have been two more acquisitions in the last decade. In addition, Endurance has chosen to set up greenfield capacity at the units it has acquired.

As Jain prepares for the next leg of growth, he is mindful both of the huge two- and three-wheeler growth opportunity in India where 70 percent of his sales come from as well as the fact that these are probably the first categories that will shift to electric propulsion.

He’s quick to point out that the government has shelved a plan to move all public transport to electric vehicles. In the absence of an adequate charging infrastructure, issues of range anxiety are bound to persist. Add to that the high cost of batteries and he believes it will take time for cars to move to electric fleets.

Still, Endurance is in a good spot as aluminium lessens the weight. “Tesla cars have more aluminium than internal combustion engine cars,” he says before adding that hybrid cars are a good intermediate step and that is where the market will probably gravitate towards. It is clearly a topic Jain has spent considerable time thinking about and one can’t help but conclude that if Endurance requires another pivot to adjust to the electric vehicle opportunity, Jain will probably be more than ready for it.