A brightened market sentiment and the need to deleverage are driving corporates to use tools such as QIPs to raise funds; this buoyancy is also beginning to show in the slow but sure revival of IPOs 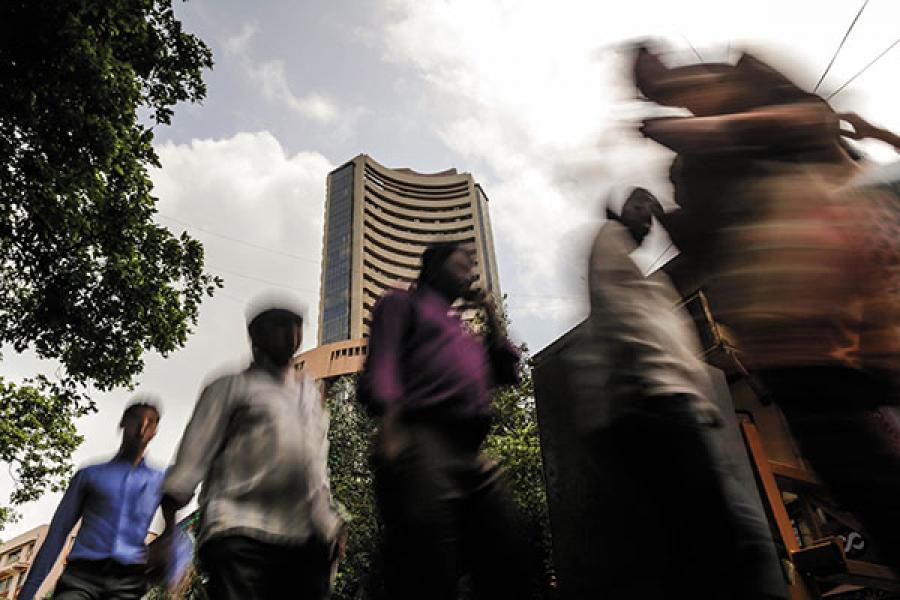 Image: Getty Images
People walk past an electronic ticker board that indicates stock figures at the Bombay Stock Exchange

Gujarat-based Astral Poly Technik, a leading maker of chlorinated polyvinyl chloride (CPVC) plumbing pipes (products which are fast replacing galvanised iron pipes in the construction industry), is starting to think “funding” rather than just business. The firm, which has an equity joint venture with US-based CPVC pipe maker Specialty Process LLC and a 35-40 percent market share in the CPVC segment, is planning to raise “long-term funds” after its board considered a proposal for this purpose in July.

Raising capital in the last three years would have been an ill-advised move for mid-cap Astral: Most capital markets, including India’s, were still reeling from the impact of the 2008 slowdown at the time. But after the Narendra Modi-led government was elected in May 2014—creating a significant shift in growth prospects and market sentiment—the Indian economy appears ready for a massive capital raising programme to help finance new projects and cut down debt which corporates had accumulated in their balance sheets.

The timing is optimal. India’s stock markets are at record highs and the euphoria of the secondary markets is likely to—as has been noted previously—spill over to the primary markets, bankers and analysts say.

Consequently, fund raising by Indian companies through the qualified institutional placements (QIPs) route has tripled to Rs 25,781 crore through 14 placements between January and August 2014, from Rs 8,008 crore through nine placements in the corresponding period last year, according to PRIME Database, which tracks capital markets. There are at least 68 other companies which have—in some cases dating back to 2012—either filed documents with market regulator Securities and Exchange Board of India (Sebi) or have announced their intentions for an initial public offering (IPO). Several are in talks with bankers to rework their markets entry strategy.

In the most optimistic case, if all these 68 companies come to the market, the estimated issue amount would be over Rs 44,000 crore, according to PRIME Database.

THE NEED TO DELEVERAGE
Private equity-backed companies will also come out with IPOs: They may not necessarily need to raise capital but will want to list the company, points out veteran PE player Bharat Banka of the Aditya Birla Group. “This achieves two goals: The PE player will get a chance to exit and it will help the company create a ‘permanent currency’ [as a listed entity].” Banka estimates that by 2016, corporates could raise $15 billion through the primary markets annually.

Public offerings are imperative for other reasons too. “The fund raising being seen now is largely towards two causes: Capital for growth and capital for deleveraging,” says Nilesh Shah, managing director and chief executive, Axis Capital. Deleveraging, or the process of reducing debt in one’s balance sheet by raising capital or selling assets or shares, has become critical for several firms after the 2008 downturn. As the promoter of a large company told a banker recently, “Bad times are those in which balance sheets get hurt. When the good times come, we should repair the balance sheets.”

India’s largest private aluminium firm, Hindalco—which has a consolidated net debt of Rs 63,348 crore as of March—plans to raise Rs 5,000 crore through a QIP to large investors.

SECONDARY MARKET SHEEN
A mix of positive domestic factors will aid investment into the country: For instance, a strong mandate to the Modi government has increased the scope for swifter reforms, interest rates are unlikely to climb and growth is set to pick up.ndia is also considered  the most attractive destination for investment among emerging markets as China and Brazil face growth concerns while geopolitical pressures are playing out in Russia, Turkey and across the Middle-East, according to top economists focussed on Asia. “After many years, corporate sentiment is on the uptick. The scenario is conducive for capital raising,” says Shah of Axis Capital. 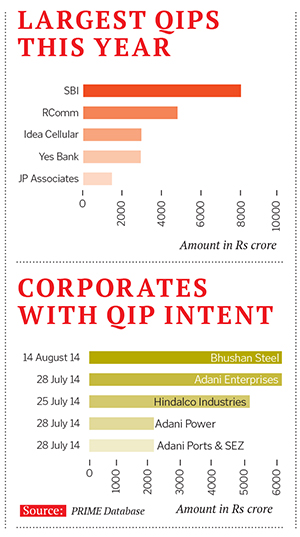 “Investor interest is far more broad-based this year with institutional investors showing interest in around 200 stocks in the secondary markets compared to some 30 stocks a year earlier,” V Jayasankar, senior executive director and head, equity capital market, Kotak Investment Banking, told Forbes India. India could see record foreign inflows this fiscal, he says.
India’s capital markets got a record $29.3 billion of overseas fund inflows in 2010. In this calendar year, inflows are at $12.15 billion; this has driven up the benchmark 30-share Sensex by 24 percent in the same period. Most investment bankers have a pipeline of “at least 4-5 mandates” from corporates who are seeking to raise capital in coming months, mainly through QIPs.

RETAIL INVESTORS STILL SHY OF IPOS
But while QIPs are being lined up, it could take some time for IPOs to start hitting the markets. There are two critical factors which may keep retail investors away. One, and this is among the more sticky issues for investors, is the determination of future profit in companies they are likely to invest in. Two, overpricing which has been keeping small investors away. An industry study shows that a majority of IPOs which listed between 2007 and 2011 were trading well below their issue price after listing, indicating overpricing.

“I have no faith in IPOs anymore. Pricing is always a concern and most stocks slide after listing. I will stay away,” says Sanjay Gupta, a retail investor who made profits in previous IPOs such as Gujarat State Petronet Limited and ONGC. In 2013, Indian firms raised just Rs 1,283.79 crore—the lowest in 12 years—through IPOs. This was in stark contrast to the record mobilisation of Rs 37,535 crore in 2010, according to PRIME Database.

Just Dial stood out as a rare success last year, raising Rs 919 crore, thanks to a robust business model which is built around a local search engine. Prior to that, in 2012, Speciality Restaurants, which operates popular fine dining chains such as Mainland China and Oh! Calcutta, launched a successful IPO in tough market conditions, garnering Rs 175 crore.

And in 2010, Jubilant FoodWorks, the local franchise for Domino’s Pizza and Dunkin’ Donuts, raised Rs 329 crore while Indian travel startup MakeMyTrip also did well with a Nasdaq listing, raising $80 million in the US.

INDIAN BANKS QUEUING UP
At the other end of the spectrum is mega-lender HDFC Bank, India’s second largest private bank by assets which, in May 2014, announced plans to raise capital to the tune of Rs 10,000 crore. This, experts say, would help boost its tier-I capital adequacy norms and foreign investor participation. 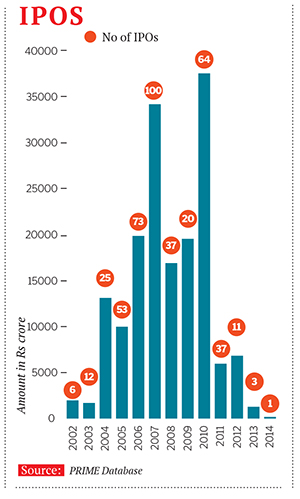 HDFC Bank’s board has given its approval to sell equity shares in both domestic and overseas markets by July next year.
The bank has strategically spread operations to the rural hinterland in recent years. It used to consistently clock over 30 percent quarterly profit growth, but this has started to wane in recent months amid a slowing economy.

The bank’s deputy managing director Paresh Sukthankar had earlier said that the fund raising would lead to a 2.5-3 percent improvement in the tier-I capital adequacy ratio. In recent years, the slackening economic environment had slowed credit growth and impacted earnings of several Indian banks in the past few quarters.

But this scenario is now changing; with investor sentiment and the macro-economic outlook improving over the past quarter, public and private sector banks are now seeking to raise capital to meet Basel III norms, boost lending capacity and account for bad loans.

Meanwhile, Union Bank of India, Syndicate Bank and Bank of India have equity offerings planned while Indian Overseas Bank has a bond offering lined up.

It is not just the large-cap firms with strong manufacturing or services presence that are looking to raise funds. Mid-cap Astral, where officials refused to talk about their fund raising plans ahead of their annual general meeting on August 25, plans to raise funds—a likely Rs 200 crore—for business expansion and a possible acquisition. Astral posted a standalone net profit of Rs 77.2 crore in FY14, with revenues of Rs 1,073.2 crore.

The line-up of IPOs is also improving: Engineering and construction firm Hindustan Construction Company announced plans to revive its IPO (Rs 750 crore) from its Lavasa ‘hillside’ project, which was deferred in 2010 due to poor market conditions. This offering will help reduce its debt and meet capital expenditure requirements.

A few other firms, including Sharda Cropchem, a Mumbai-based company which manufactures crop protection chemicals, have got Sebi clearances for their offerings while Adlabs and Monte Carlo Fashion have filed for IPOs too.

The bottomline: As Chetas Desai, CEO of Ambit Corporate Finance, puts it, “companies which had kept their businesses and balance sheets strong are well-placed to raise capital again”. This is a period of unusual optimism and needs to be utilised well. And soon, Singh of HDFC Bank points out: “For corporates, the window for raising money will be shorter and the boom-and-bust business cycles are also getting shorter. So if the going is good, please capitalise.”

Correction: Indian travel startup MakeMyTrip raised $80 million, and not $80 billion, through a Nasdaq listing. The error is regretted.