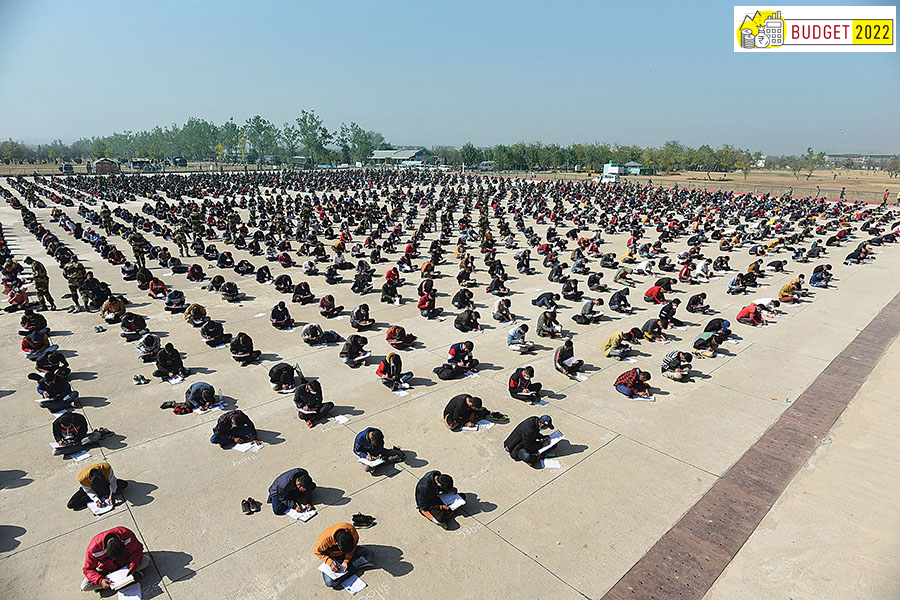 The optimistic economic recovery in India is yet to reflect in the labour market.

India’s unemployment rate touched a four-month high of 7.9 percent in December 2021, according to the Centre for Monitoring Indian Economy (CMIE), which also records urban unemployment at 9.3 percent and rural unemployment at 7.28 percent. Economists tell Forbes India that there continues to be wage and work insecurity among those employed, which makes it important for the upcoming Budget to prioritise creating a targeted, sector-specific approach toward job-creation and skill development.

“Though Budget 2021 helped reduce the intensity of unemployment, it has failed to address the problem in a significant manner. Unemployment is still higher than pre-Covid levels and workers’ participation rate has increased very marginally,” says labour economist KR Shyam Sundar, who is a professor at XLRI, Jamshedpur.

He explains this through the latest Periodic Labour Force Survey (PLFS) data released by the government for the January-March 2021 quarter. In urban areas, which saw an exodus of migrant workers moving back to rural areas in the wake of the pandemic, the unemployment rate was at 9.4 percent. This was lower compared to 10.3 percent in October-December 2020 and 13.3 percent in July-September 2020, but slightly higher compared to the pre-pandemic levels of 9.1 percent in January-March 2020.

With the pandemic continuing and the third Omicron wave, Finance Minister Nirmala Sitharaman must assume that there will be uncontrollable factors that will hurt the economy, and by extension, job creation, Sundar says. “So the labour market scenario, coupled with economic distress, is going to pose substantial challenges that the Budget will have to tackle.”

Economists say last year’s Budget, with respect to jobs, was infrastructure-centric and focussed on long-term structural changes. It was supposed to translate into employment, but that has not happened so far, says Rosa Abraham, assistant professor, Centre for Sustainable Employment, Azim Premji University.

In the last Budget, Sitharaman had announced allocations, including seven Mega Investment Textiles Parks (MITRA), economic corridors and national highway works for Tamil Nadu, Assam, Kerala and West Bengal, and ₹18,000 crore to support augmentation of public bus transport services. There was also the production-linked incentive (PLI) scheme across 13 sectors, with an outlay of ₹1.97 lakh crore over five years.

All this is good signalling, but ultimately these projects have long gestation periods, and implementation takes time, says Nalini Gulati, country economist at International Growth Centre (IGC). “Implementation of many of the schemes, like the textile mega park, is happening now, one or two months prior to the Budget. So it takes a whole year or more for some of these projects to be operationalised. The government needs to have strategies for job creation that can be implemented quickly given that the situation is dire.”

Abraham agrees, saying that while the PLI provision might promote job creation, an infrastructure-oriented approach looks to alleviate second-order problems without tending to the first-order problem of jobs not being there. “For example, there was much applause about Gross Value Added (GVA) in the construction sector growing by 15 percent, which was a result of the infrastructure push, but that did not translate into employment growth or wage increase for workers,” she says. “These schemes take time to manifest and we need a more targeted approach, like the employment guarantee scheme. We also need to promote more universal public services like health care and education, to get jobs.” 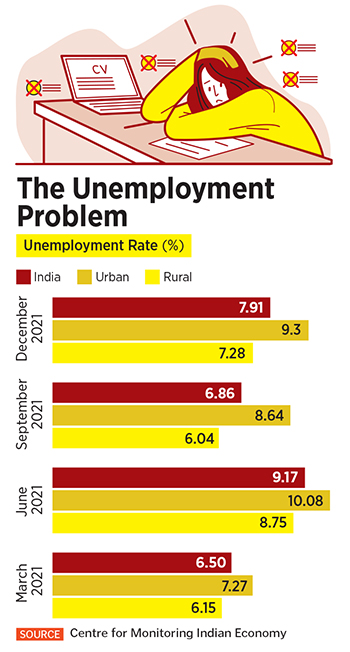 While also focusing on agriculture, alternative rural non-farm employment prospects must be improved, says Sundar. Another important budgetary measure, he adds, must be to increase allocation toward the scheme under the Mahatma Gandhi National Rural Employment Guarantee Act (MGNREGA), India’s largest rural public works programme. Since it is demand-driven, higher demand is considered a good indicator of stress in the labour market, and vice versa.

In FY21, according to the EcoScope research report dated December 9 by Motilal Oswal Financial Services (MOFS), as many as 112 million people, or 9.3 million workers per month, were employed under MGNREGA due to the reverse migration from urban centres to rural areas. Between April and November 2021, this number increased to 11.2 million people per month, a growth of 20 percent. “This confirms the gradual pace of reversal in the reverse migration that occurred in the wake of Covid-19. Migrant workers, thus, are yet to feel confident enough to move back to urban centres,” says the report.

The Centre had allocated ₹61,500 crore to the programme in 2020-21, which was revised and increased by 81 percent to ₹111,500 crore. Last year, however, budgetary outlay was reduced by about 35 percent to ₹73,000 crore. “MGNREGA is a labour market shock-absorber and the finance minister should increase both the number of work days from 100 to at least 150, and increase the wages. At any rate, the outlay has to substantially increase,” says Sundar.

The government, he says, should also consider an urban labour market programme on the lines of MGNREGA to alleviate the distress caused due to Covid-19 to informal and casual workforce in urban areas. Such schemes are already in place in a few states, including Kerala, Jharkhand, Odisha and Himachal Pradesh. According to Sundar, there needs to be provision for a direct benefit transfer scheme in urban areas—on the lines of the PM-Kisan for rural farmers—to help affected and below-poverty-line workers in sectors like construction, hospitality, tourism, as well as small traders and street vendors.

The MOFS report referenced above states that on an aggregate basis, the total number of workers in the listed universe (about 3,500 companies) has stood at 6.5 million for the past three years (FY18-20), which amounts to under two percent of the country’s total employment. “Furthermore, the share of the IT sector, the largest in the listed space, would be just around three percent (including indirect employment) of the total employment. Without wage inflation, better employment growth in these sectors is unlikely to have a nationwide impact, unless complemented by some other broad measures,” the report says.

“The share of urban jobs is falling, and within that, the share of better-paid, salaried jobs is also falling,” says Gulati, echoing the need for a comprehensive urban jobs strategy across key sectors in urban centres, as well as support to MSMEs. “We also need much better data availability on workers to correctly assess the situation and gaps, and strategies can only be based on that,” she says.

New labour codes were passed in Parliament a year ago, but the rules are yet to be finalised. The government also launched the e-Shram portal in August 2021 for creating a National Database for Unorganised Workers (NDUW), and linking them to social security schemes. It targeted registering 380 million people. As per the e-Shram portal dashboard, on January 5, 189 million registrations, roughly 50 percent, have been completed so far. “The aim should be to use this data to create productive, robust employment with social protection. The latter is especially important given the informalisation of jobs in the economy,” says Gulati.

Abraham says the Budget needs to have a targeted focus toward creating jobs for women and youngsters, who are most vulnerable in the workforce [see boxes]. “Most youngsters have withdrawn from work entirely and the current pool now is a much older workforce. This also speaks to a loss of talent,” she says. According to her, the Budget must focus on apprenticeship schemes or bridge courses that can link education to employment, which will facilitate the re-entry of young workers.

Gulati says the government needs to recognise the changing realities of work, and public skilling programmes must be revamped so people can make use of them to pivot. She points to how the Deen Dayal Upadhyaya Grammeen Kaushalya Yojana (DDU-GKY), the placement-linked skill training programme for poor rural youth, has been lacklustre in the previous year. Employment generation under the scheme fell to just 50,000 in 2020-21 compared to 1.5 lakh in 2019-20, she says.

“As recovery happens, when Omicron is behind us and people in rural areas are again willing to migrate to urban centres, then maybe the DDU-GKY programme can come into focus once again,” she says. “But it needs to be much more than just conducting job fairs. There must be special migration support for women because they face more constraints in accepting job offers and also tend to drop out of jobs due to various challenges.”

Tweets by @forbesindia
Take control of your hypertension Management
Photo Of The Day: Just chilling