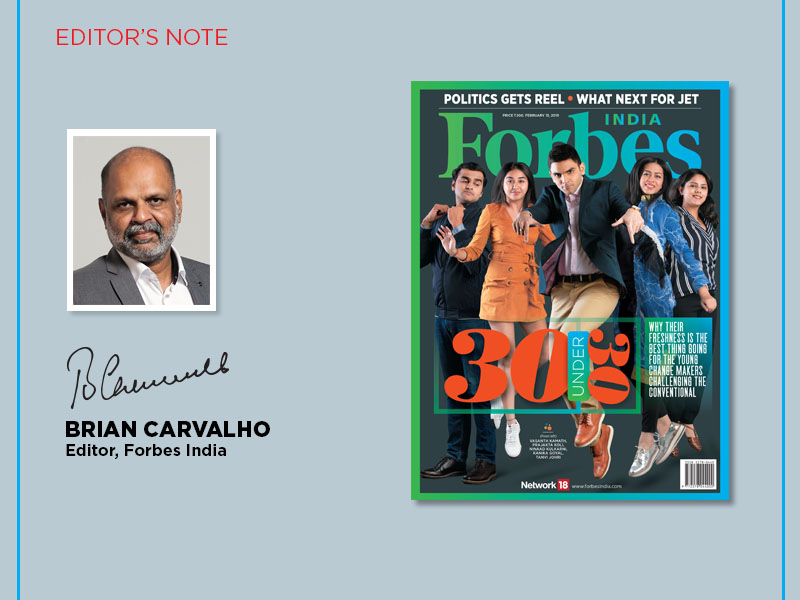 Larry Page and Sergey Brin founded Google when they were 25. Steve Jobs and Steve Wozniak started Apple at 21 and 26. And Bill Gates was 20 when he and 26-year-old Paul Allen co-founded Microsoft.

Moral: You need to be young— under 30—to become a billionaire innovator, right? Not quite. Joseph Lubin was inching towards 50 when he and Vitalik Buterin created Ethereum, the open-source blockchain-based distributed computing system. And Arianna Huffington started The Huffington Post at 54.

This isn’t one of those youth vs experience debates. The short point of the first two paras is that you can pretty much start up at any age and the odds of success have little to do with whether you are 25 or 52. It’s just that starting early helps. And that’s why our 30 under 30 listing matters. We’re not celebrating poster boys and girls of success here, but their passion and entrepreneurial spirit.

Some of them will fail, many will come back stronger. They will be in elite company. We remember Evan Williams, Noah Glass and Florian Webber as three of the four who co-founded Twitter in 2005. But we wouldn’t recall their role in Odeo. That’s because the podcasting platform had to call it a day once Apple’s iTunes burst onto the scene. Odeo made way for Twitter. Just as an online dating and social networking site made way for one for professional networking: Reid Hoffman had started up SocialNet in 1997, five years before he and four others co-founded LinkedIn.

Team Forbes India’s 30 under 30 package, helmed by Associate Editor Salil Panchal, is our effort to celebrate the audacity and enterprise of India’s youngest and budding talent. Our selection is across a spectrum of categories, from the arts, sports and entertainment, to technology, health care and social entrepreneurship.

This is Forbes India’s sixth 30 under 30 list, and one person who’s been there—on the 2014 list—done that and is now back in a new avatar is Rahul Yadav, the once precocious and cheeky founder of Housing.com who told his investors they were “intellectually incapable” before being kicked out from the startup. Today, a much-chastened and matured Yadav has shelved his entrepreneurial hat. “I don’t’ think India is yet ready for me to start something again,” he tells Forbes India’s Kathakali Chanda in an exclusive interview. Still under 30, Yadav may have shed some of his sassiness but what persists is his spontaneity and outspokenness. “Leaders tend to get delusional a bit and take wrong calls with confidence,” he tells Chanda. “But now I won’t do such a thing.” Don’t miss the interview.

Perhaps when winning is what matters most, failure may not be an easy trough to climb out of. The global sporting landscape is littered with stars who faded into oblivion almost as fast as they lit up the skies. A few of them, however, dragged themselves back, and Chanda spoke to a handful, from leg-spin maverick-turned-commentator L Sivaramakrishnan to startup founders who flopped with their first ventures after a promising start, and have since moved on to fresh forays. Will they eventually hit pay dirt? Chances are higher if they are able to, as Olympic shooting champion Abhinav Bindra puts it, “preserve the passion”. Turn to ‘Rising from the Ashes’ for more on why it helps if raw passion is able to seek out that companion called reason.