For India, with its unchangeable addiction to foreign capital, the threat of instability in international money markets is serious 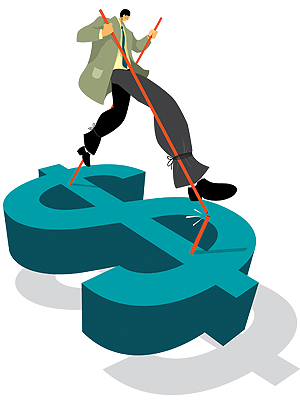 Since 2009, the key drivers of financial markets have been low rates and abundant liquidity, which have boosted asset prices. In the great reflation, according to one estimate, over 80 percent of equity prices are supported in some way by quantitative easing (QE). Real estate prices and share markets have been underpinned by the global flow of money. Emerging markets, in particular, have been beneficiaries of strong capital inflows as investors have sought out higher returns on both debt and equity instruments.

The amount of money pumped into global markets is $10-12 trillion, enough to buy each person on earth a widescreen flat TV. Today, $200-250 billion in new liquidity each quarter may be needed globally to simply maintain asset prices.

However, the world is entering a period of asynchronous monetary policy, with divergences between individual central banks that have the potential to destabilise asset markets.

The US Federal Reserve (the ‘Fed’) is scaling back, terminating purchases of government bonds and mortgage backed securities (MBS), which at their peak provided over $1 trillion a year in new funds to markets. While new purchases have ceased, the Fed does not plan to sell its portfolio of around $4 trillion of securities. It will continue to reinvest principal payments from its holdings of MBS and roll over maturing treasury bonds. However, the Fed has indicated that it will normalise its balance sheet over the next decade. This would mean a withdrawal of anywhere up to $3-4 trillion in liquidity globally.

The combination of maintaining its balance sheet at sizeable levels and low official interest rates will keep financial conditions loose. But the Fed will not add significantly to liquidity. The withdrawal of Fed support will be offset, many have assumed, by the European Central Bank (ECB) and Bank of Japan (BoJ).

The ECB plans to expand its balance sheet by over $1 trillion over the next 18 months by purchasing government bonds, asset-backed securities and loans to banks. The BoJ plans to purchase Japanese government bonds at an annual rate of over $700 billion. At 16 percent of gross domestic product (GDP), the Japanese scheme is much larger than the US Fed’s QE measures adjusted for relative size of the two economies.

The balance sheets of the BoJ and ECB should expand by a total of a minimum of $2.5 trillion by the end of 2016 at current exchange rates. This is comparable to the $3.6 trillion expansion in the Fed’s balance sheet since 2008.

A wild card is the People’s Bank of China (PBOC), which is also loosening money supply. But this may be to mitigate the tightening in liquidity resulting from the increasing controls on China’s shadow banking system. It also targets providing funding to the local government, which is clearly unable to service its debts.

There are some doubts as to whether the ECB will fully complete its QE programme despite the blessing of the European Court of Justice. Problems include lack of suitable securities and agreed limits on the concentration of securities purchased. Unwillingness of holders of Eurozone government bonds to sell their holdings is also a barrier to completion of the intended programme. The attraction of exchanging securities with positive returns for cash earning negative interest rates has unsurprisingly proved limited.

But there are differences between the liquidity programmes. The US Fed and BoJ purchase government bonds. The ECB lends to banks. The PBOC acts almost exclusively through the banking system. The crucial difference between the actions of individual central banks is that the ECB, BoJ or PBOC cannot directly supply the dollars crucial to global markets.

The importance of dollar liquidity is driven by several factors. First, the US dollar remains the most important global reserve currency. The US debt markets, at around $60 trillion, are the largest in the world and larger than Europe and Japan combined. Second, the US dollar plays a crucial benchmark role with a number of currencies formally or de facto linked to the dollar. US rates influence the pricing of assets globally. Third, the largest amount of foreign currency debt, especially that issued by emerging market borrowers, is denominated in US dollars.

According to the Bank of International Settlements (BIS) at the end of the third quarter of 2014, US dollar credit to non-bank borrowers outside the US totalled $9.2 trillion, comprising 46 percent of debt securities and 54 percent of bank loans. The total has increased by over 50 percent since end-2009. Emerging market borrowers have borrowed $5.7 trillion in foreign currency. Around 75 to 80 percent of this debt is estimated to be dollar denominated.

Cross border borrowings, mostly in US dollars, by Chinese banks and companies have reached $1.1 trillion. It is around $450 billion for Brazil, $380 billion in Mexico and over $700 billion for Russia. It is unclear what proportion of these liabilities is protected against currency risk by US dollar income or derivative hedges.

Tightening of available dollar liquidity, a rising US dollar and anticipated increases in American interest rates will result in losses on these borrowings. In turn, this will create repayment difficulties for over-indebted borrowers, in turn triggering a new financial crisis. The risk is exacerbated by domestic weaknesses in many emerging markets.

Since the first oil shock, petro-dollar recycling, the surplus revenues from oil exporters, has been an essential component of global capital flows. A prolonged period of low prices will reduce available liquidity, pushing up the US dollar and increasing interest costs affecting the ability of borrowers to gain access to needed dollars. In the first few months of 2015, Saudi Arabia’s large foreign exchange reserves fell by an unprecedented 15 percent, consistent with tightening liquidity.

At the same time, emerging market foreign exchange reserves, which have financed spendthrift developed nations, are now not growing. This reflects both weaker exports but also rebalancing of these economies to a more domestic focus.

Since around March 2015, the price of risk has been adjusting around the world. Yields on 10-year German government bonds (known as Bunds) have reached above 1 percent, up from near zero a few months ago. French, Italian and Spanish yields have also risen by similar amounts. The bellwether 10-year US Treasury yield has risen by around 0.60 percent. Equivalent Australian government bond rates are up by around 0.80 percent. Rates have jumped in emerging markets: 1.75 percent in Indonesia, 1.6 percent in South Africa, 1.5 percent in Turkey and 1.3 percent in Mexico.

The interest rate moves have been accompanied by large changes in currency markets. Volatility in currency and interest markets, in particular, has increased. Share markets have been affected but not lower amounts.

The position is eerily similar to 1997-98. Then, a combination of falling commodity prices, especially oil, a stronger US dollar, rising US interest rates and emerging market debt and weaknesses led to the Asian monetary crisis, the Russian default and the collapse of the hedge fund Long Term Capital Management. At the time, deliberate actions by the BoJ to weaken the yen via QE complicated the position of Asian economies integrated into Japan-centric supply chains. If China attempts to devalue aggressively, then a similar effect can be expected on economies linked now to the Middle Kingdom. The risk of policy errors by central banks and governments is now great.

For India, with its seemingly unchangeable addiction to foreign capital, the threat of instability in international money markets is always serious. This is so especially when other pressures such as the weak domestic activity, poor public finances, indifferent export performance, need for international investment in infrastructure and banks and an inflated asset market are considered.

The government and Reserve Bank of India, at least on the surface, seem unconcerned about the rising risk to financial stability.