In the digital era, CFOs are at the heart of strategy and making decisions, not just supporting them 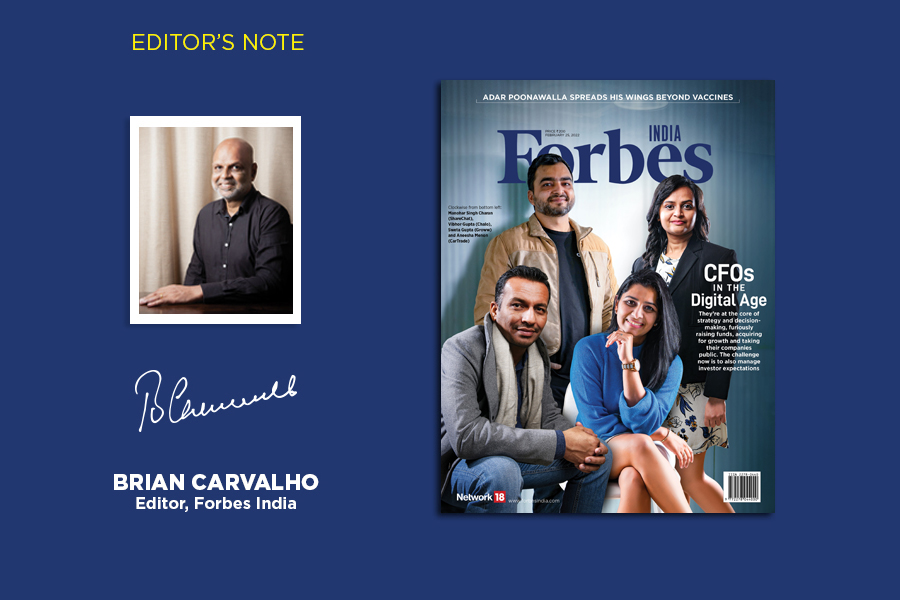 Few career paths have been as distinctive as that of Sumant Sinha. Armed with a master’s in international finance from the School of International and Public Affairs, Columbia University, he plunged headlong into investment banking with stints at ING Barings and Citicorp Securities in the 90s. After a decade on Wall Street, in the early 2000s he returned to India as chief financial officer (CFO) of the Aditya Birla Group. Over the next few years, as the Indian economy and stock markets witnessed a purple patch, it was on Sinha’s watch that the commodities conglomerate would go on to acquire Novelis and Idea Cellular.

By 2008, Sinha had moved on and, three years later, he founded renewable power producer ReNew Power, now one of India’s largest clean energy ventures, and recently listed on the Nasdaq via a special purpose acquisition company (SPAC).

Sinha is a rare breed of founders—an investment banker-turned-CFO who would go on to don the entrepreneur hat. And it is that stint as head of finance that would have held him in good stead when pushing growth at ReNew Power—via multiple rounds of fund-raising, buying out renewable portfolios like a hydropower project in Uttarakhand and solar projects in Telangana, and listing overseas via a merger with RMG Acquisition Corp II, a Nasdaq-listed SPAC. Sinha got into the CFO role in 2002, just ahead of the economic boom that would last till 2008. In that period of ample liquidity and feel-good, CFOs came into their own. Their mandates became more complex and challenging—from not just counting beans to growing them. The CFO was now at the heart of strategy and making decisions, not just supporting them. They were hunting down acquisition targets, exiting non-core businesses, seeking to raise capital efficiently, and keeping an eagle eye on costs as well on investor expectations.

CFOs were now as critical as CEOs—and many finance heads would find their way to the corner room. Two celebrated examples are Rajesh Gopinathan and Keshav Murugesh. Gopinathan was elevated from CFO at TCS to CEO in 2017, and Murugesh’s career path can be traced back to ITC where he was vice president (finance), and ITC Infotech where he rose to CFO; he went on to become Syntel CEO and has been WNS group CEO for the past 12 years now.

Cut to 2022. Indian stocks are once again in a bull frenzy, public markets till recently had cashed in on that delirium, fundraising and a unicorn-every-10-days phenomenon persists, and buyouts are in vogue. The difference this time round is that it is the digital bandwagon that is at the heart of the action. And, at the fulcrum of these new-age ventures is, once again, the CFO.

The Forbes India cover story this fortnight is on the new breed of CFOs at companies that were once—some still are—early-stage tech startups. They have reached a stage where the founders cannot by themselves do all the heavy lifting. Enter the CFO (although a clutch of co-founders has taken on the finance mantle). As Rajiv Singh, who’s helmed this package on India’s digital CFOs, says, their mandate is different in many ways, the biggest variance being the way they look at the P&L (profit and loss), which for many is a case of little P and a lot of L. The challenge for the CFOs of a few of the listed new-age businesses would be to convince IPO investors about their path to profitability and in the process lift their stocks from below the offer price they have sunk to. I won’t reveal any more here, turn to page 22 to read about India’s New-Age CFOs.