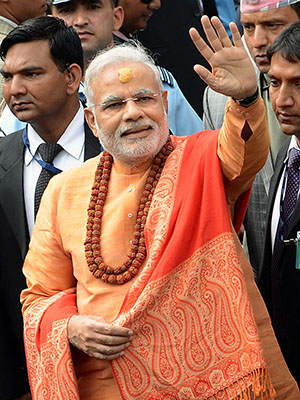 Image: Getty Images
After his win, Narendra Modi tweeted: “Good times are coming”, but the how is still unclear

Foreign and local investors have been wildly excited by the ascent of Narendra Modi and the BJP to government in India. Expectations are high. But as Friedrich Nietzsche wrote in 1878 in Human, All Too Human, “hope is the worst of all evils, because it prolongs man’s torments”.

Old Problems
India appears to have chosen Modi, rather than the BJP. The government’s political and technocratic talent pool remains unknown and untested.

India’s parliament remains, as ever, the province of dynastic politicians, celebrities, rich and alleged criminals. In this election, 17 percent of assessed candidates faced criminal charges, including for rape or murder.

It will have to deal with internal tensions that surfaced during the poll campaign, dividing the spoils of victory internally and amongst its supporters. It will have to reward its business backers instrumental in BJP’s success.

Despite oft-repeated campaign mantras about the tea-seller’s son, Modi and those in the BJP are professional politicians, proximate to the influential, wealthy and business groups. The BJP spent an estimated $500-700 million on its election campaign, presumably financed by its supporters in expectation of favourable policy decisions.

Business interests that support the BJP are rarely interested in long-term structural reforms. They favour stock market-driven artificial wealth, based on preferential access to government contracts, fast-tracking of approval for their projects, access to national resources like land, commodities and spectrum at favourable prices and access to capital, from state-controlled domestic banks.

On important issues, business interests have significant difference of views that will complicate policy-making. In manufacturing, some believe India has no future and should not seek to compete. Others favour high-value added, advance technology manufacturing. Another group favours labour-intensive low-tech industries, such as clothing, leather and food processing. All groups agree, however, that the government should subsidise their preferred strategy.

See Through
Modi campaigned on an anti-corruption platform, which played well to an electorate tired of scandals.

But his desire for accountability and transparency did not extend to detailing contributions to the BJP’s coffers. It did not follow the example of the Aam Aadmi Party (AAP), which discloses every donation received on its website. The fact that AAP won only four seats does not suggest that the electorate or the major political players are interested in addressing India’s electoral funding system, which is part of the corruption problem.

In early July 2014, Modi appointed close aide Amit Shah as BJP president to strengthen control over the BJP and government. Shah is awaiting trial on charges of extortion and conspiring to carry out extra-judicial killings in Gujarat. He also oversaw the PM’s legal defence when they were charged in the 2002 Hindu-Muslim riots in Gujarat. The actions are arguably inconsistent with Modi’s desire to fight corruption and ensure clean governance and transparency.

Mandates of Heaven
The BJP only won 31 percent of the vote; the Congress 19 percent. The government does not have a majority in the Rajya Sabha. The BJP will have to work with the Upper House to pass major legislations related to the Constitution, tax and foreign investment.

The new government will also have to work with India’s many state governments on matters that are outside its jurisdiction. The states are dominated by regional political parties who received around 50 percent of the national vote. The government will have to deal with a bureaucracy resistant to change and an independent central bank led by a formidable, well-credentialed governor.

Foreign faith in its ability to reinvigorate infrastructure investment misses the point that matters like land acquisition are the responsibility of the states. An analysis by JP Morgan of the 50 largest stalled projects found that 55 percent were being delayed due to state issues and another 25 percent due to problems of access to raw material, controlled by government-owned, but independent entities such as Coal India Limited.

Modi’s Hindu nationalist philosophy and alleged complicity in the Gujarat riots may prove divisive. Open magazine’s cover headline was Triumph of the Will, an unfortunate and hopefully unwitting allusion to Leni Riefenstahl’s cinematic chronicle of the 1934 Nazi Party Congress in Nuremberg.

Only around 10 percent of India’s substantial Muslims voted for the BJP. During the campaign, leaders of one radical Hindu organisation affiliated with the BJP argued that Indian Muslims should not be allowed to buy properties in Hindu areas. Modi disapproved of the statement. However, in Gujarat, there is strong evidence of Muslim marginalisation.

His decision to celebrate his win with a Hindu religious ceremony in Varanasi was a poor signal for a harmonious secular India. These factors will detract from social cohesion, important for economic development. It may also increase tensions with Islamic neighbours.

The decimation of the Congress means India, which had no government, now has no opposition. There may be a few checks and balances on the government, especially given Modi’s presidential style of rule as chief minister of Gujarat.

Looking for Clues
The post-election period has provided few clues as to how the government plans to meet the high expectations of the electorate and markets. In a statement to Parliament in early June 2014, the government announced a series of “national missions” without details of implementation.

The government committed to a “Diamond Quadrilateral project of high-speed trains”, a self-conscious reference to the previous BJP government’s ‘Golden Quadrilateral’ of highways linking major cities. The government would create another 100 new cities with “world-class amenities”. There were commitments to changes in the tax system, including a general sales tax, one of the few precise proposals. India would be transformed into a globally competitive manufacturing hub, powered by “skill, scale and speed”.

The embrace of large-scale infrastructure and manufacturing is interesting given Modi’s previously stated views that India’s requirements are different from China’s and requires a balance between agriculture, small and large businesses.

The statement repeated the government’s “dedication to the poor”. It also committed to better education as well as toilets and broadband and wireless internet access simultaneously. Support for women coincided with reports of yet another heinous case of rape and murder of two lower caste women.

The July 2014 budget highlighted the constraints on the government, with a budget deficit of 3.6 percent for the next financial and 3 percent the subsequent year. Unburdened by detail, the government nevertheless promised to increase economic growth to 7-8 percent within three years, reduce the fiscal deficit, increase employment and improve living standards. There were vague proposals about increasing foreign investment in defence and insurance, reduction of an ineffective subsidy regime, and tax simplification.

The government’s approach appears curious. It reverted to relying on hoary old chestnuts—higher excise duties on cigarettes, cigars, betel leaves, tobacco products and soft drinks—to raise revenue. Prior to the budget, the government was quick to implement export controls to try to rein in the price of onions.

Attempts to increase railway fares by around 14 percent to put the railways in a more secure financial position were seen as a willingness to push forward unpopular but necessary economic reforms. But the resolve crumbled in the face of protests, leading to a repeal of some increases on shorter journeys, which mostly affect urban customers in cities such as Mumbai.

Shortly after his victory, Modi tweeted “Good times are coming”. They might well be, but the ‘how’ still remains frustratingly unclear.

Same Again?
Investors have forgotten that Modi’s less charismatic and less controversial predecessor Manmohan Singh was once hailed as India’s saviour. He was the “architect of modern India” and drove important changes that paved the way for strong economic growth. By the 2014 election, Singh was seen as indecisive, weak and a puppet for interests of the Congress party.

British politician Tony Benn once observed that all political careers ultimately end in failure. It remains to be seen if Modi can bring about the necessary changes or whether he joins an illustrious line of Indian political leaders who did not live up to their promise.

Show More
Thank you for your comment, we value your opinion and the time you took to write to us!
Comments 19